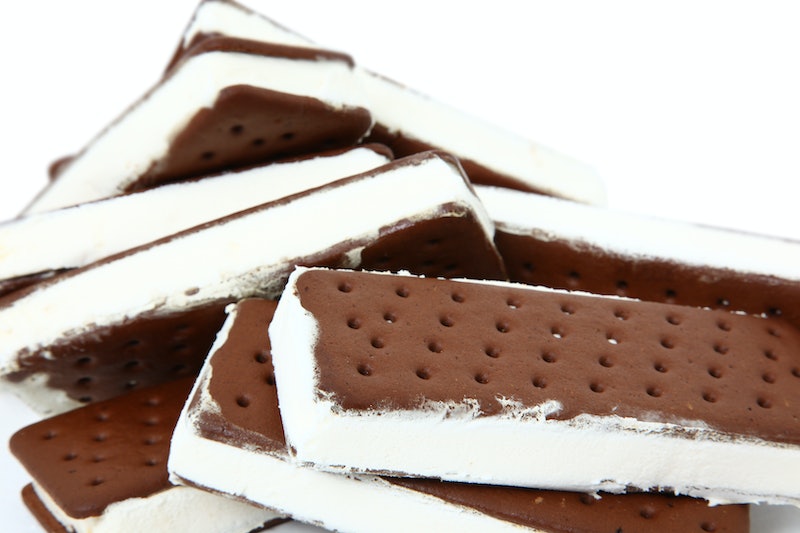 This disturbing fact should be enough to spur all self-sworn lovers of summer to stand up and take notice. The risk of a melting confection is half its appeal; without it, how will small children know not to eat that scoop of ice cream that dropped from their cone to the floor more than an hour ago? In fact, that exact scenario is just how this "ice" "cream" sandwich trickery was first discovered.

Cincinnati's WCPO bravely reported one woman's discovery of the sandwich scam last week. Christie Watson talked to the station after she looked outside one morning only to discover the ice cream sandwich she'd given her son the night before had been (cruelly) abandoned overnight and still hadn't melted 12 hours later in 80 degree heat.

I noticed that my son had left his ice cream sandwich outside, and I was wondering, "Why is there still ice cream in there?" I thought, "That's quite weird." So I looked at the box, and it doesn't say artificial ice cream. It says ice cream.

Now Watson has to worry not only about a small child who doesn't devour an ice cream sandwich in mere seconds (weird), but also about what the heck was in that ice cream sandwich to begin with. And apparently Walmart's bars have guar gum and cellulose in them. Those additives are meant to thicken the bar to make it "creamier" without using cream ($$$), and they're probably keeping the ingredients solid for way longer than seems appropriate.

Then again, as WCPO points out, you can buy a pint of Haagen-Dazs for the price of a whole box of Walmart sandwiches, so there's that to consider.