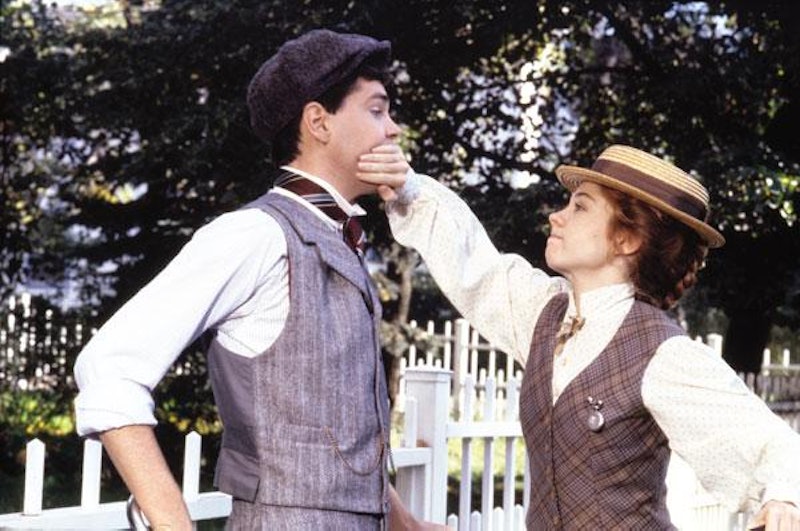 A protagonist like Anne Shirley doesn't come along every century, but when she does, readers bow down. She's smart and willful and imaginative; she's incorrigible and feisty and kind. She's always getting into "scrapes," as she calls them, but has a real drive to both do and be good. You'll never find her lying or cheating, though you may find her crying in her room because she's accidentally dyed her hair green.

Anne Shirley came to life in the novel Anne of Green Gables, by L.M. Montgomery, which was published in 1908, during the heyday of first wave feminism. The Anne books don't necessarily grapple with the tenets of feminism head on; the world of Anne Shirley is a quiet, old-fashioned one, focused more on the beauties of nature and Anne's schoolgirl dreams than, well, suffrage. But although feminism may be dealt with obliquely, it's still there, and Anne is its fiery red-headed flag-waver — when she's not racing around picking violets and daydreaming about her alter ego, Cordelia.

1. She holds her own during her first ride home with the girl-fearing Matthew Cuthbert, and ends up making him adore her

Matthew, much to his surprise, was enjoying himself ... He had never expected to enjoy the society of a little girl. Women were bad enough in all conscience, but little girls were worse … But this freckled witch was very different, and although he found it rather difficult for his slower intelligence to keep up with her brisk mental processes he thought that he "kind of liked her chatter."

2. She convinces Marilla and Matthew to let her stay at Green Gables, despite the fact that she isn't a boy

The child raised her head quickly, revealing a tear-stained face and trembling lips. "You would cry, too, if you were an orphan and had come to a place you thought was going to be home and found that they didn't want you because you weren't a boy."

"Well, they didn't pick you for your looks, that's sure and certain," was Mrs. Rachel Lynde's emphatic comment … Anne continued to face Mrs. Rachel undauntedly, head up, eyes blazing, hands clenched, passionate indignation exhaling from her like an atmosphere. "How dare you say such things about me?"

4. She stands up for herself when Gilbert Blythe harasses her. Sure, he's totally dreamy, but you can't just touch a girl's hair without consequences

She flashed one indignant glance at Gilbert from eyes whose angry sparkle was swiftly quenched in equally angry tears. "You mean, hateful boy!" she explained passionately. "How dare you!" And then — thwack! Anne had brought her slate down on Gilbert's head and cracked it — slate, not head — clear across.

5. She's not jealous of other women

"Oh, I'm so glad she's pretty. Next to being beautiful oneself — and that's impossible in my case — it would be best to have a beautiful bosom friend."

6. She speaks her mind, even though everyone is always telling her to stop talking

"I've had [children should be seen and not heard] said to me a million times if I have once. And people laugh at me because I use big words. But if you have big ideas you have to use big words to express them, haven't you?"

7. She's not afraid to go head-to-head with the menfolk, especially when it comes to academics

Anne flung herself into her studies heart and soul, determined not to be outdone in any class by Gilbert Blythe … Now Gilbert was head of the spelling class; now Anne, with a toss of her long red braids, spelled him down. One morning Gilbert had all his sums done correctly and had his name written on the blackboard on the roll of honor; the next morning Anne, having wrestled wildly with decimals the entire evening before, would be first.

"The trustees have hired a new teacher and it's a lady … Mrs. Lynde says they've never had a female teacher in Avonlea before and she thinks it is a dangerous innovation. But I think it will be splendid to have a lady teacher, and I really don't see how I'm going to live through the two weeks before school begins."

9. She never feels limited by her gender

"Why can't women be ministers, Marilla? … I think women would make splendid ministers."

10. And because of that, she's extremely ambitious

"I'll win that scholarship if hard work can do it," she resolved … "Oh, it's delightful to have ambitions. I'm so glad I have such a lot. And there never seems to be any end to them — that's the best of it."

11. She beats out the boys and is admired, respected, and loved for it

Mrs. Lynde deposited her substantial person upon the stone bench by the door … "I don't believe in girls going to college with the men and cramming their heads full of Latin and Greek and all that nonsense." "But I'm going to study Latin and Greek just the same, Mrs. Lynde," said Anne, laughing.

13. She always places a high premium on close female friendships

"I wonder which of the girls here are going to be my friends. It's really an interesting speculation … I'd like to know them both — know them well — well enough to walk with my arm about their waists, and call them nicknames."

14. She used her ambitions to save her family's farm

"I'm just as ambitious as ever. Only, I've changed the object of my ambition … My future life seemed to stretch out before me like a straight road. I thought I could see along it for many a milestone. Now there is a bend in it. I don't know what lies around the bend, but I'm going to believe the best does."

More like this
The 'Firefly Lane' Book Ending Teases Way More Tears To Come In 2023
By K.W. Colyard
Amanda Gorman Shared A Powerful Message On Meghan Markle’s Penultimate Podcast
By Darshita Goyal
'Bridgerton' S3 Teases Exciting Social Season For Penelope Featherington
By Bustle
The 'Lady Chatterley's Lover' Book Leaves Us With A Troubling Question
By Catharina Cheung
Get Even More From Bustle — Sign Up For The Newsletter