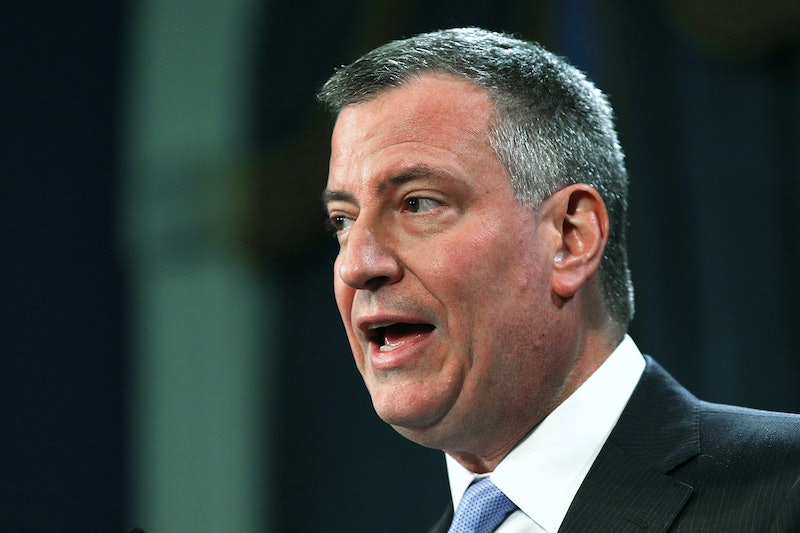 Pizzagate is upon us again, ladies and gents. Turns out New York Mayor Bill de Blasio ate pizza with a fork in Naples, Italy while on vacation with his family, and everyone in New York is freaking out about it. This is the second time the New Yorker has committed such a transgression — that we know about. He was first captured making the horrifying error in January, when he ate pizza with utensils as a newly-minted mayor. (Political suicide, obviously.) The fork he used in the so-called Pizzagate was later auctioned off for $2,500.

But the thing is, eating Neapolitan pizza with a fork and knife is sorta the norm. The pizza's appreciably different than New York pizza — it's cooked really quickly in a stone oven heated by a fire, making the center super soft, and it generally doesn't come sliced. Many Italians will cut into their pizza with a fork and knife to make a more rectangular slice and then eat it with their hands. It is an incredibly delicious and effective way of consuming the world's best 'za.

In the past, the mayor has used the fact that this sort of pizza-eating exists as an excuse for his New York pizza behavior. The New York Daily News quotes him furnishing the following excuse in the aftermath of Pizzagate the First:

In my ancestral homeland, it is more typical to eat with a fork and knife. I've been to Italy a lot and I picked up the habit for certain types of pizza.

As The Daily News rightly points out, New York Mayor Bill de Blasio is from Massachusetts. (His maternal grandparents hail from Italy.)

And apart from that, de Blasio is surely aware of the fact that different types of pizza require different styles of eating. New York pizza is by-the-slice. You eat it with your hands. Chicago-style deep dish is sometimes a fork-and-knife affair. Neapolitan pizza is a a sort of renegade combo, and the best of them all.

The practice of eating by-the-slice pizza with a fork and knife has become especially verboten ever since The Daily Show's Jon Stewart (rightly) railed against Donald Trump for taking Sarah Palin to Famiglia's Pizza when she visited New York City in 2011. The Donald stacked his slices (who does that?) and then ate them with a knife and fork, prompting one of Stewart's most epic comedic rants.