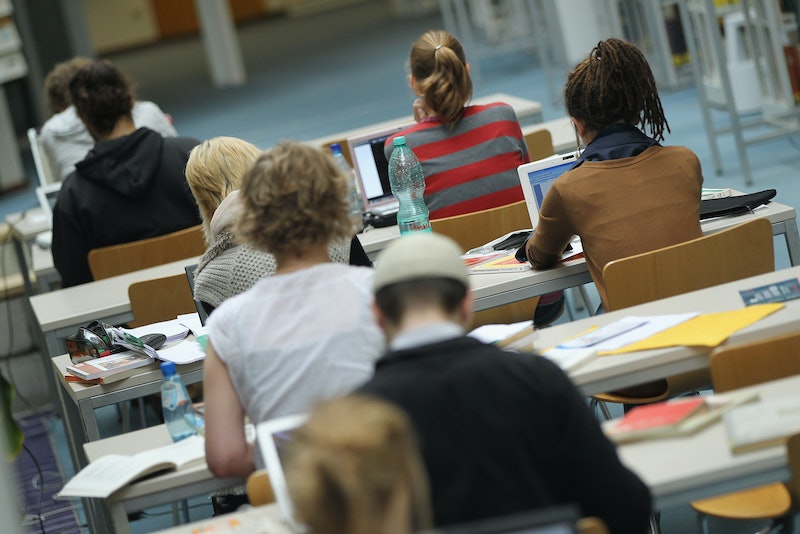 If there's any adjunct teaching in your future this fall, I send my condolences. Working as an adjunct is probably the most underpaid, stressful, and thankless semi-professional jobs in existence today. For those of you who don't know, colleges (largely community colleges) hire "adjuncts" to basically to serve as temporary professors for basic, into-level courses. Adjuncts traditionally filled holes in schedules, or helped colleges to flesh out their offerings in a flexible way. It is a job best suited, in my opinion, for a retiree or a stay-at-home parent.

However, with increasing dysfunction in the higher education system, adjunct teaching has become a much worse offer. Colleges use adjuncts positions as a way to reduce their costs without having to extend benefits or job securities to even their most trusted employees. And we adjuncts take these jobs because the academic job market sucks and is only getting worse.

If you've already kissed your adjuncting career goodbye, then I invite you to reflect not-so-fondly on what it was like. If you never have and never will serve as an adjunct, then consider yourself lucky. And if you're about to become an adjunct for the first time, godspeed to you. Beware, because there are some struggles only we can truly understand.

You have next-to-no teaching experience and a room full of students just tying to rubber-stamp one more degree requirement at what is likely a non-selective institution. Some will be hyper-polite and mistakenly call you "Dr." or "Professor," but most will likely treat you like you're their servant. On my first day of adjuncting at a community college, I had students explain to me that they were majoring in gunsmithing and firefighting. It was a culture shock, to say the least.

Oh by the way, many of these adjunct jobs are located at other colleges, i.e. not that close to yours. True story: I drove 107 miles to an adjunct job, six trips per month, for a semester. I've known adjuncts who lived in Brooklyn but commuted to Staten Island, and who lived in Manhattan but commuted to Connecticut. It's one thing to do that for a fancy finance job... but for what is essentially academic temp work? Ick.

Well, first of all "office hours" may be a misnomer because adjuncts usually aren't assigned offices. But, take it from me, office hours are always feast or famine. Most of the semester, no one will show up –– unless you're running late, of course. But before a test you can expect half of your class (the frantic half) to show up and ask you to give the lectures all over again. Nice try.

A big stack of to-be-graded papers is about the least appealing thing on the face of the earth. On top of being monotonous and time-consuming, grading is depressing, because you feel like a failure when your students are failures.

Brace yourself, because the end of the semester is actually the worst. At least a few students from each class will email complaining about their grades — most of which were entirely warranted and, moreover, totally foreseeable. In the modern American college, students feel like customers, and they want the grade they paid for. Get ready to deal with the complainers.

What are they paying you for all this hassle? Less than you'd think. Each course will be worth about $3,000 dollars, but pay varies widely, and only a crazy person would attempt to teach more than three or four per semester. Designing your own course seems exciting, but beware: that means you'll effectively be earning even less per hour. Even at $3,000 per semester without any course design responsibilities, the 15 or so hours per week you'll put in for a 16-week course comes out to only $12.50 per hour — and that's before taxes and transportation costs. I've made more money than that babysitting.

You'll be lucky if you don't die penniless near your unheated house. The only benefit that adjuncting job will offer is ineligibility for unemployment money. Although adjuncts are kind of trying to unionize, don't expect to see anything come of this soon.

or hope of future employment

It's almost unheard of for adjunct professors to be offered more stable employment at their universities. If you put in more than a year or two, you'll probably be too busy to do your own research and will become disconnected from the academic world. My advice? Get in, do an adequate job, and get out — whether it's to better academic employment or something else. Don't cooperate with this exploitative practice any more than you absolutely must.

More like this
These 3 Zodiac Signs Could Write A Bestselling Novel
By Brittany Beringer
TikTok Has A Genius Old School Hack For Saving Money
By Sophie McEvoy
These 4 Zodiac Signs Make The Best Bridesmaids
By Nina Kahn
The Zodiac Sign Pairs Most Likely To Have A Sibling Rivalry
By Kristine Fellizar
Get Even More From Bustle — Sign Up For The Newsletter
From hair trends to relationship advice, our daily newsletter has everything you need to sound like a person who’s on TikTok, even if you aren’t.