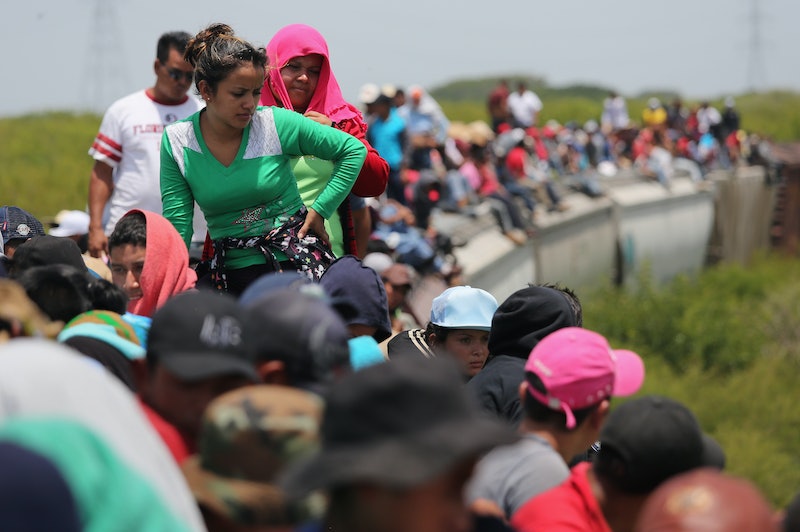 We all know the immigration system is broken. The infamous "Gang of Eight" unsuccessfully tried to fix it this summer, largely in hope of appealing to the growing Latino U.S population. In reality, we are more disallusioned than ever.

Enter the Dream 9. The nine brave activists were held in a private detention center in Central Arizona for crossing the Mexico/U.S border without immigration papers to protest the historic amount of deportations under the Obama Administration. After two weeks of massive online and offline activism, they were released back into their American communities on Wednesday.

Their courageous and creative protest has demonstrated what's wrong with our immigration system. Their future may be uncertain, but their release doesn't mean the conversation will end.

In honor of the Dream 9, here are three overlooked yet critical ways our immigration system is broken:

1. Mandatory Detention Without A Hearing

This might be the most overlooked problem of all.

As we witnessed with the Dream 9, being placed in a private detention center is mandatory when immigrants are detained. This includes "the sick, elderly, pregnant women, green card holders, asylum seekers, undocumented immigrants, and legal residents who’ve resided in the U.S. for years." According to a recent Open Society report, the U.S. immigration detention system has grown dramatically from around 70,000 people detained a year in 1996, to around 400,000 people in 2012.

Undocumented immigration is a civil offense — yet when immigrants are taken by authorities they are treated as criminals and placed in a detention center with no right to a bond. Sometimes they wait month after month until they have to appear in court and present their case.

2. The Privatization of Detention.

Capitalism at its best. The private prison industry is increasingly taking over the immigration detention system. In yesterday's Latino USA for NPR panel, Aura Bogado of Colorlines.com poignantly stated something we all tend to forget when talking about immigration reform: "These private prison corporations are literally invested in keeping those 32,000 beds filled every single night."

The insidious private prison industry accounts for 50 percent of detention beds. The industry also lobbies at the state and federal level on laws and policies that affect detained immigrants. The Detention Watch Network says the private prison industry "pockets millions of taxpayer dollars every year because of quotas that force our immigration agency (ICE) to keep detainees locked away from their families, even though community-based programs are effective and far cheaper than imprisonment."

The National Immigration Forum did the math and found out ICE spends over $2 billion a year to detain immigrants. To detain one person, it costs an average of $164 per day. More effective community-based programs can cost as little as $12 per day per person.

This one is a biggie and way more complicated to deal with than the previous two. Referred to as the "New Jim Crow" by Dr. Cornel West, the industrial prison complex that includes immigration detention centers is systematically racist. The laws that place immigrants in these detention centers are systematically racist. Think about it: Which bodies are disproportionately represented in the private prison industry? Bodies of color.

Arizona's controversial immigration law SB 1070 (and the copycats that followed) gave local police authorities the power to "engage in a broad range of immigration enforcement actions. This resulted in racial profiling and increased the likelihood of arbitrary arrest and detention." According to the ACLU, there's been more than 50 examples of individuals — including U.S. citizens and legal permanent residents — who claim to be victims of racial profiling and unlawful or prolonged detentions.

Doctoral candidate in African American Studies at the UC Berkeley Christopher Francis Petrella found that "people of color are over-represented in private prisons by an additional 12%." In a report entitled “The Color of Corporate Corrections” Petrella and NYU graduate student Josh Begley explain why:

Our sense is that applying privatization to the most vulnerable and politically marginalized racial groups allows state DOCs and the private prison industry to externalize costs without facing “legitimate” public backlash.

Congress may have brushed immigration reform aside, but the rest of us won't be forgetting about it anytime soon.