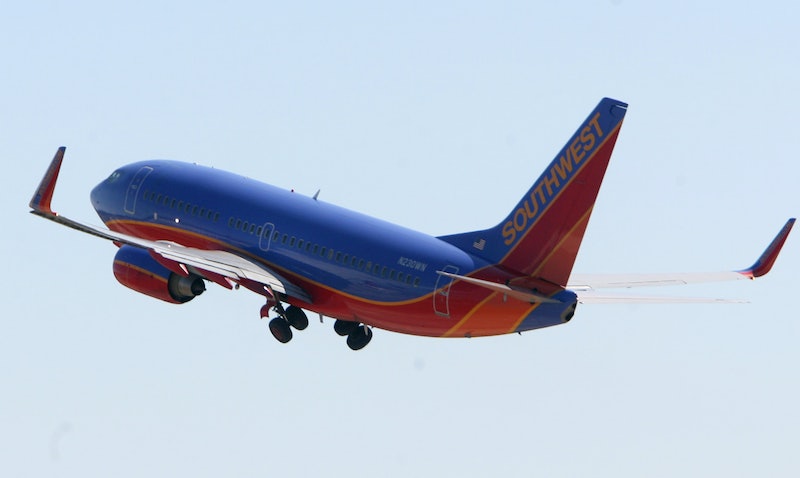 We've all had our parents throw a customer service fit. I remember a particular instance that involved my dad, a cigar, and an Applebee's that will forever scar my memory. But in the social media age, a dad's tweet just got his family kicked off a Southwest Airlines flight.

Duff Watson, a frequent flier and member of the company's A-List customer rewards program, is typically allowed to board first on Southwest (cue impressed ooh-ing and ahh-ing). The airline has an open-seat policy, so it is a first-come, first-served basis that can make it difficult to snag spots next to people you're flying with.

So, on July 20, Watson and his two children tried to board a flight from Denver to Minneapolis with the elite, and the gate agent allegedly stopped his remarkably ordinary, non-A-List 6- and 9-year-olds from boarding with him.

After the A-List boarded without Watson, he boarded with his children. But not before asking the last name of the agent. Once inside the plane, he took to Twitter to vent his frustration.

"I tweeted something like, ‘Wow, rudest agent in Denver. Kimberly S, gate C39, not happy @SWA,’” he told ABC News. The tweet has since been deleted.

Watson then heard his name called over the speaker, asking him to exit the aircraft, only to come face-to-face with his favorite agent!

"She [the agent] said I was a safety threat," Watson told ABC. "I was shocked. There was no use of profanity, there were no threats made. How was I a safety threat?"

Then, in front of his crying kids, Watson said he had to delete the tweet before they could fly.

"She said, 'I'm gonna call the cops.' I like thought that like something bad was gonna happen, like my dad being in jail," the cherub-faced Lucy Watson recounted to ABC.

NBC affiliate KARE reported that Watson had tweeted praises at Southwest for a helpful agent helping with luggage check-in. After a quick response from @SWA, he tweeted back and thanked them for the "luv."

It's hard to know what Watson's Twitter is like when he's not pissing off various airline employees. His tweets are now protected, presumably to avoid future plane ejections.

I think the only time that I've bitched about customer service on Twitter I ended up with a $20 Jimmy John's gift card and not, you know, thrown off of a plane or censored by an airline. So I guess the customer isn't always right.

To be fair, Southwest did offer him a $50 voucher after the incident, but Watson said he would donate it to charity. #neveragain

More like this
How The City Healed Five Years On From The Manchester Arena Attack
By Ella Glover
36 Influential AAPI Voices On Pride, Power & Progress
By Faith Xue
Kim Kardashian's Ombré Pink Mani Features A Nod To BF Pete Davidson
By Paris Giles
Photos Of Boris Johnson Drinking At A Downing Street Lockdown Party Have Surfaced
By Bustle UK
Get Even More From Bustle — Sign Up For The Newsletter