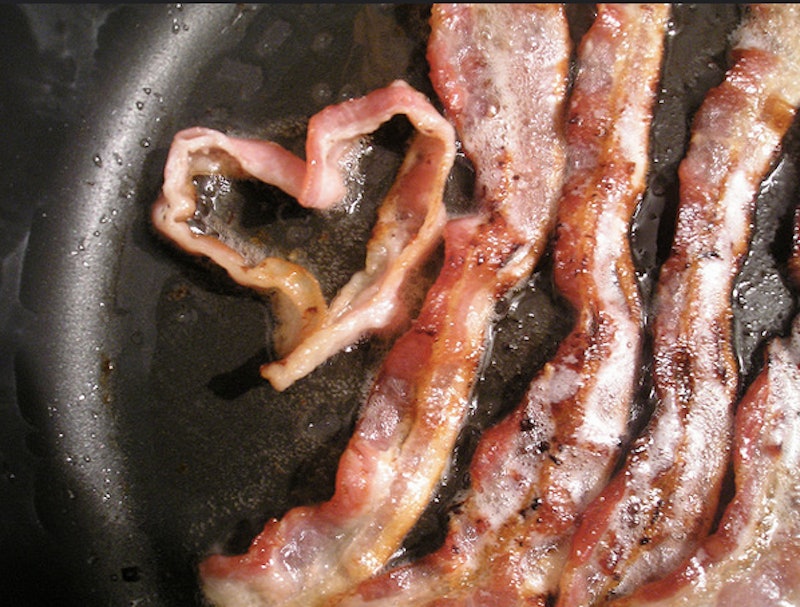 Prior to launching the 2014 Reebok CrossFit Games, it appears that the company realized it had not fully exploited the marketing potential of the Paleo Diet, a health regime that many CrossFit enthusiasts have adopted as a lifestyle. While most diets reject bacon as an evil source of saturated fats that contribute to heart disease, the Paleo diet embraces the meaty treat — or at least, the unprocessed, low sodium version. Paleo loyalists base their diet on that of our Paleolithic ancestors, who apparently adored bacon.

Recognizing this, Reebok has concocted an advertising campaign that is certainly unprecedented in the athletic industry. In 74 shoeboxes, Reebok stored bacon in dry ice and shipped it out to the competitors of the CrossFit Games, which began on July 22. The "express bacon," shall we call it, is free of nitrates, preservatives, any and all sweeteners, and MSG. It is also sourced by U.S. Wellness Meats, the preferred bacon provider of Paleo Magazine .

On the inside lid of the bacon box, Reebok incorporated perhaps the most impressive soliloquy to bacon to date:

All hail the king of meat. We bow before you, bacon, with perfect form. We surrender only to your salty deliciousness. Here’s to the way you fill our mouths and our hearts. Here’s to your heavenly aroma replacing the smell of sweat in our nostrils. We love you, bacon, in all your grease-glistening, protein-packed glory. And we promise to eat you until the day pigs fly, which will hopefully be in the form of bacon into our mouths.

But the bacon festivities do not end there. At the site of the games, attendees are presented with an opportunity to indulge in all things bacon: bacon-wrapped artichokes, bacon-wrapped chorizo, bacon-wrapped seasoned pork belly, and bacon-wrapped carne asada and pepperoncini. All of this comes form the Reebok Bacon food truck, or course. Especially brave bacon enthusiasts can order from the "secret menu" in order to receive a "You Had Me at Bacon” card, which can redeemed at the Baconcierge.

Reebok has got one thing right — if you're going to go bacon, you might as well go all the way.