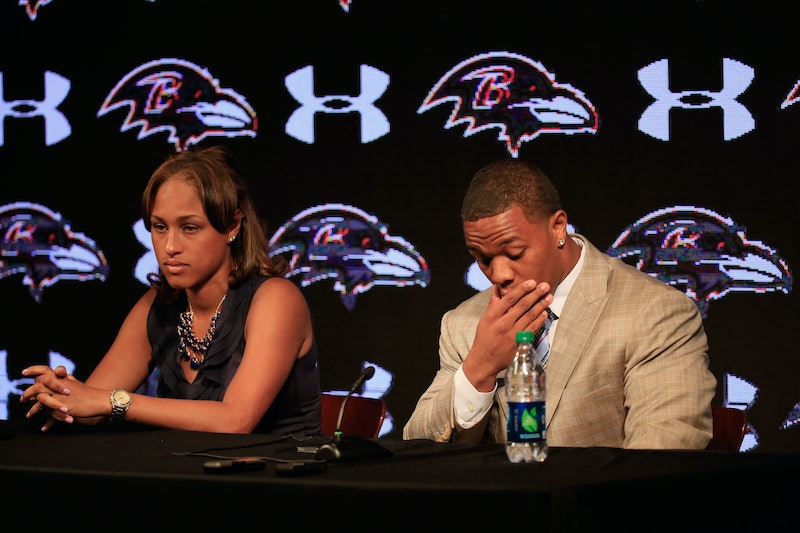 The NFL once barred Terrelle Pryor from five games for getting free tattoos in college. On August 1, Josh Gordon will appeal his one-year suspension for testing positive for marijuana. And Thursday, Baltimore Ravens running back Ray Rice will get a two-game suspension — for knocking his fiancée unconscious at an Atlantic City casino.

One of these things is not like the other.

The Ravens expected to be missing Rice at the beginning of the season following his arrest last February, and with the minimal suspension they are not expected to appeal the decision. After the Feb. 15 altercation, horrifying security footage emerged showing Rice dragging the apparently unconscious Janay Palmer (now his wife) out of a casino elevator. He was charged with felony aggravated assault, but the first-time offender skirted jail time by entering into a pre-trial intervention program.

Rice must also pay a $58,000 fine for violating the NFL's "personal conduct policy," which amounts to roughly one percent of his estimated $7 million take home per season. You know, just to throw a little extra something-something in what amounts to a stern finger wagging from the NFL.

This whole debacle has been handled poorly by the Ravens, most obviously by Rice himself, from the get go. At a May 23 press conference, Rice displayed a horrible sense of awareness when he used this analogy to address his alleged assault:

Then Palmer, who has since gotten married to Rice, added this: "I deeply regret the role I played in the incident that night."

The entire time, the Ravens' social media redistributed the quotes in a supportive manner.

Let me be very clear: No instance of domestic violence should be taken lightly. None. But the security footage, the Ravens' mind-boggling and unwavering support of its player, and Rice's star role in the NFL made this a very public, high-profile issue. It was the NFL commissioner Roger Goodell's chance to crack down and demonstrate that the league takes these issues seriously. This punishment makes it abundantly clear and infinitely puzzling that the league is more concerned with handouts and drug use than it is with domestic violence.

It's time for the NFL to revisit its personal conduct policy. Because if a violation only garners a two-game suspension and what amounts to chump change-fee, it is clear that they don't value women.

More like this
How The City Healed Five Years On From The Manchester Arena Attack
By Ella Glover
Michigan’s Governor Is “Going To Fight Like Hell” To Protect Abortion Access
By Andrea Zelinski
Jake Daniels Just Became The UK’s First Active Football Player To Come Out As Gay Since 1990
By Sam Ramsden
What Is Jeanie Buss' Net Worth? The Lakers President Is Uber Rich
By Hugh McIntyre
Get Even More From Bustle — Sign Up For The Newsletter