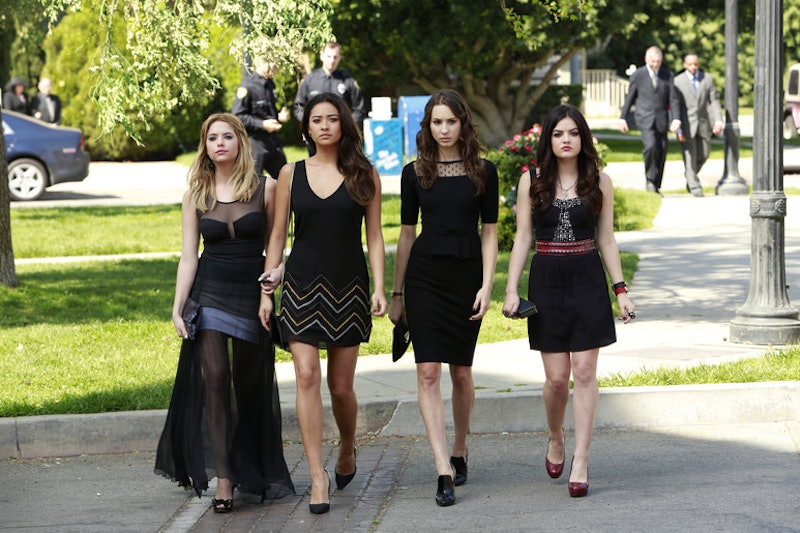 The third season finale of Pretty Little Liars left us with more questions than we could shake a tube of Alison's Jungle Red lipstick at. Is Ali really Red Coat? How did Detective Wilden's car find its way out of the lake? Why does the median age of Rosewood High School students appear to be 25?

We didn't have to wait long to see the junk in Detective Wilden's trunk: a corpse. Well, a pig corpse. Womp womp. But a real, live (you know what I mean) dead body did turn up the next morning — that of the late Detective Wilden himself.

The newly medicated Mona seems to be doing her best to rebuild her friendship with Hanna and prove her allegiance to the Liars. She even picks the girls up a round of coffees, which is the greatest gesture of affection that I've ever known. Having a stalker might pay off if it means someone will know your latte order by heart.

Then again, could little Miss Vanderwaal be playing the long con? After all, she is, as only Hanna could put it, "Hannibal Lecter smart."

Still gloomy over his breakup with Aria, Ezra Fitz has neverthless accepted a permanent job at Rosewood — haven't we been through this storyline about thirteen times? In less felony-y relationship news, Emily and Paige dream of attending Stanford together.

Creepiest moment of the week: The Liars come across a group of little girls playing with dolls that share their names — and their faces. Where did the kids get their new toys? From someone named Alison, of course. In the last scene of the episode, a masked figure places these dolls alongside what appears to be a shrine to Ali.

Fashion crisis of the week: That forehead-swallowing black headband Hanna wears while planning an after-school shopping trip with Mona.

Crazy conspiracy theory of the week: Maybe they call it the NS-A for a reason.

See you next week, bitches. Muah!