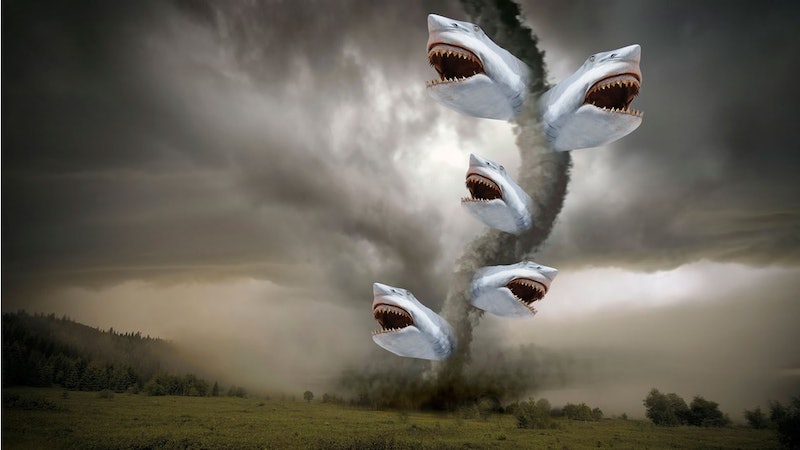 Originally, this article was going to be very different. After reading an interview in which Sharknado 2 star Tara Reid expressed her belief that sharknados could actually happen, I was all ready to write up a piece making fun of the actress for her ridiculous, obviously uninformed fear. But first, I thought, let me do a little research, get some science on my side to support the clearly factual statement that sharknados cannot happen, no matter what the movies say. It turns out, though, that that was a horrible idea, because after reading a few articles, I now have to say two things I never thought I would: that a) Tara Reid is not entirely wrong, and b) SHARKNADOS ARE REAL.

According to science, waterspouts — tornados over water that get larger once on land — are totally able to suck sea ceatures out of the water and toss them onto land. Fish, crabs, frogs, and EVEN SMALL SHARKS have relocated because of waterspouts bunches of times, and while larger sharks are unlikely to make the move because of their weight, it's not impossible.

"There's no doubt [a waterspout] could lift small amphibians or small fish and suck them into the vortex," said climatologist Bill Patzert to The Daily News.

For a waterspout to carry sharks as big as the ones shown in Sharknado, it'd have to be massive, Patzert said, spinning at speeds of over 250 mph, and that's unlikely to ever happen. Still, if it does, there's no reason to think great whites and other giant sharks couldn't withstand the pressure and ride along.

But don't worry, guys, because according to reports gathered by Mother Jones, even if sharks do fall from the sky, they'd probably be dead before they hit you. The most that could happen would be getting accidentally crushed by a couple of them, which, I don't know, still seems like a PRETTY BAD THING TO HAPPEN.

So, Tara Reid, I owe you an apology. Although your agreeing to star in Sharknado and its sequel may not have been the smartest move, today's science lesson has taught me that your fear of getting attacked by flying sea creatures isn't actually that unwarranted. However, let me be the one to inform you that your other questionable comment in the interview, that you "don't think pigs could fly," needs no hesitation. Pigs can't fly. They never will. And, as I've learned all too well, I'm certainly not going to do the research to find out anything different; realizing the possibility of one animal air attack is certainly enough for one day.

More like this
J.Lo Wants To Make A Sequel To This Movie With Ben Affleck
By Jake Viswanath
Jodie Turner-Smith & Joshua Jackson's Relationship Timeline Includes Her Proposing
By Jake Viswanath
Hugh Jackman Shared The Sweetest Tribute To His “Extraordinary” Wife
By El Hunt
'Bridgerton' & 'Succession' Casts Join Forces For A New Dickens Adaptation
By Darshita Goyal
Get Even More From Bustle — Sign Up For The Newsletter