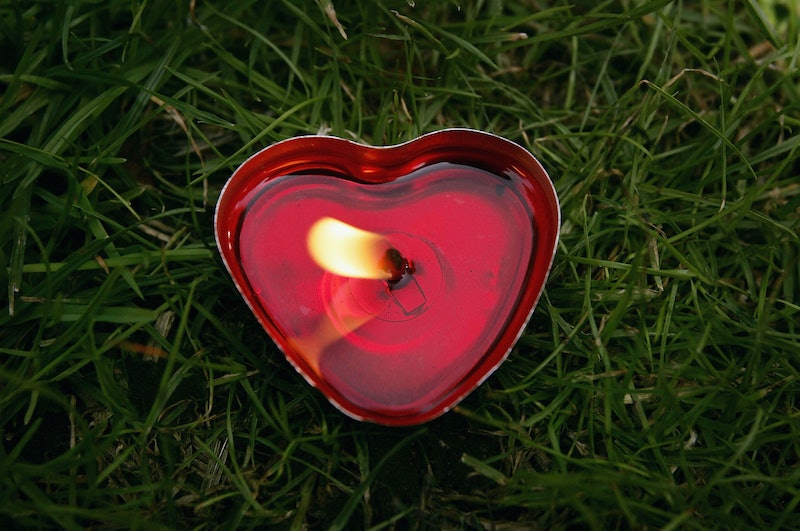 Some years ago, I was suffering from the worst broken heart. This was the kind of heartbreak where you can’t eat, sleep, or even walk down the street without everything putting you at risk of tears — and not the sweetly sorrowful feminine kind, but the honking, snorting, convulsing kind. I tried many techniques to stop the pain, from thoughtful journaling to shrieking outside of his house at 4 am. I read countless books. I wrote (and sent) innumerable stupid emails. I repeated the story to my friends around, say, one gillion times. At the end of each day, I could count on one hand the number of pain-free breaths I had taken. One day, in the middle of all this, I was taking out the trash. I was wheeling two big trash bins down a little hill to the curb, and as usual, I was crying my eyes out. My mind was in its usual state of convulsive thought: Why did I say that? Why did he do that? What if I was taller, shorter, prettier, uglier, had bigger boobs, smaller boobs, had grown up in Texas, or majored in biology? I hate him and I want him back and if only he would come back, I would be whatever it is that would make him stay.

I mean, don’t we meditate to feel less? Aren’t we supposed to become lady Dalai Lamas in yoga pants, floating in an ocean of transcendent bliss? Certainly not for me. Instead, the deeper my practice became, the more I felt.

I sat down on the curb between the trash bins, still sobbing, hoping that when the trash people came, they would throw me away too. I don’t think I can do this anymore. I can’t take it anymore. I. Can’t.At the moment I thought this, I actually heard a voice. It said, But wait. Nothing is happening right now. It was as though God herself had commanded my silence, and my mind suddenly fell completely still. I stopped crying. I looked around. It was true. Nothing was happening. No one was taunting me. No one was criticizing or shaming me. No one was there. It was trash day, and that was that.Just like that, I had a profound and unforgettable experience of liberation. It was awesome. And it lasted … for about nine seconds. Then all the sorrow and agitation came rushing back. But I never forgot the lesson I learned in that moment: It wasn’t the circumstances of my life that were causing my sorrow. It was my thoughts. If I could learn to work with my thoughts, I suddenly suspected, I could heal my heart.This turned out to be true, and I discovered just how true when I learned to meditate. I was amazed, not by meditation's scientifically-proven capacity to increase activity in my left prefrontal cortex (whatever that does), but simply by it’s ability to help me stabilize and sort through feelings, moods, doubts, and, most of all, my fear. It helped me work with my thoughts, even the most jumbled and painful ones. I found that my mind was able to slow down and find some ease. This wasn’t just a self-help tactic du jour, it was a path through life, a way of being in the world. Most of all, it was a way to be brave and kind. Who knew.

Still, the first time I sat down to meditate, I was nervous. Could I do it? How would I silence my mind? How would I bear the boredom? These questions persisted until one day when I sat down to practice I burst into tears — like, a million tears. Suddenly, I found that I was sobbing and sobbing — not because anything had happened to hurt me, but because I suddenly saw the dam I had constructed to hold back all the tears of my life.

I realized how many of my feelings I had “stuffed” as inappropriate, undesirable, unwieldy, or just plain stupid. Something about the act of meditating brought this wall down. It sounds strange, but I've seen it time and time again in myself, my meditation pals, and, now, in my students, all of whom at some point report a version of this: The more I meditate, the more I feel.This can be confusing. I mean, don’t we meditate to feel less? Aren’t we supposed to become lady Dalai Lamas in yoga pants, floating in an ocean of transcendent bliss? Certainly not for me. Instead, the deeper my practice became, the more I felt. People hugging on the street brought a tear of joy to my eye. A picture on Facebook of a hurt animal doubled me in sorrow. I noticed that some people had an air of sadness or hardness or sweetness and in each instance, I felt all those things too. Both tears and laughter came much more readily to me.

I told a friend and fellow meditator about this and she sort of teared up. (Again with the crying.) She said, this is what a good world would be, one where we can feel each other’s pain and joy. To her, this was evidence of compassion.

Having compassion — for ourselves and others — happens when we no longer fear what we feel. Compassion means not being afraid of who you are, even if who you are, at the moment, is heartbroken. Because for better or worse, meditation has not taught me how to "not feel" anything. Instead, it's done something even better: It's taught me how to be genuine.

More like this
The 8 Best Crystals For Meditation, According To A Healing Energy Practitioner & Meditation Teacher
By Lauren Moison
These Artists Are Reimagining Black History Month To Create A Better Future
By Katie Mitchell
25 Inspiring Quotes From Black Women To Celebrate Black History Month
By Kyli Rodriguez-Cayro and JR Thorpe
19 Instagram Captions For Celebrating Black History Month
By Ayana Lage
Get Even More From Bustle — Sign Up For The Newsletter
From hair trends to relationship advice, our daily newsletter has everything you need to sound like a person who’s on TikTok, even if you aren’t.