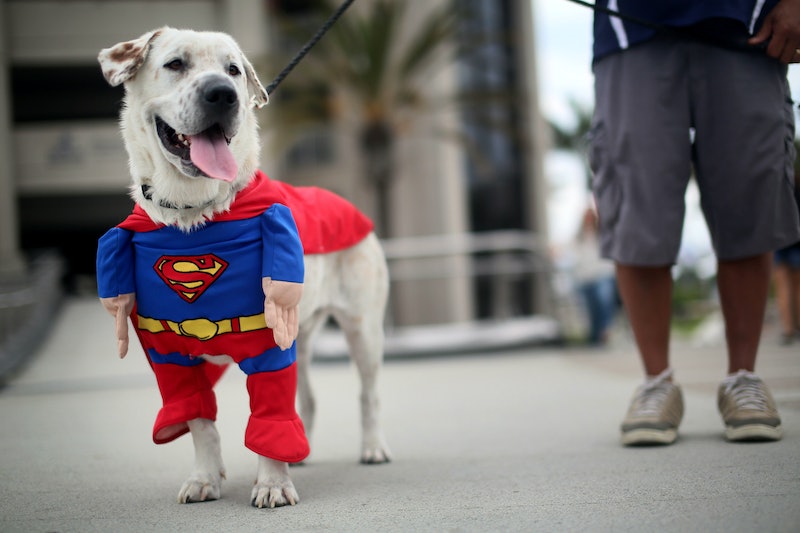 Scientists have now confirmed what every dog owner already knows: Dogs get jealous, just like humans. Researchers placed dogs and their owners in a room and asked the owners focus their attention on nearby objects — a jack-o-lantern, an animatronic dog, and a pop-up children’s book that played music — instead of their dogs. The researchers found, not surprisingly, that the (real) dogs were twice as likely to try and get their owner’s attention when the owner was playing with the (fake) dog, as opposed to the other two objects (although one poor, confused dog snapped at the jack-o-lantern as well). Tactics used by the dogs included everything from nipping at the fake dogs to showing more affection to their owners.

“Many people have assumed that jealousy is a social construction of human beings, or that it’s an emotion specifically tied to sexual and romantic relationships,” said the University of California at San Diego’s Christine Harris, one of the researchers. "Our results challenge these ideas, showing that animals besides ourselves display strong distress whenever a rival usurps a loved one’s affection.”

Of course, this is just the latest entry in a growing body of research that suggests the similarities between dogs and humans are deeper and more far-reaching than we’ve assumed in the past. Here are just a couple of ways in which our canine companions are just like us.

For two years, neuroeconomics professor Gregory Berns and his colleagues painstakingly trained dogs to sit completely still for long enough to undergo M.R.I. scans in an attempt to study the dogs’ sentient brain functions. Once they conducted the scans, they noticed that dogs and humans share a “striking similarity” with regard to one crucial brain region: the caudate nucleus. In humans, the caudate is activated by things that we enjoy — food and good music, for example — and is generally associated with positive emotional responses.

The researchers found that dogs’ caudate is activated by the same things that activate the human caudate. While this doesn’t necessarily prove that dogs experience emotions the same way we do, it does strongly imply this. Berns found the evidence so compelling that he says he now thinks it’s reason to consider strengthening of dogs’ legal rights.

In one exhaustive Hungarian study, scientists observed so many similarities between dogs and humans that they suggested that canines, not chimpanzees, should be considered humans’ closest analogue. Much of this has to do with social behavior: Human groups act much more similarly to groups of dogs than groups of chimpanzees.

Anthropologists have identified three main types of social behavior in humans: “Sociality,” when individuals in a group are more loyal and less aggressive towards one another; “synchronization,” when they follow shared rules and take on one another’s emotions in order to strengthen group solidarity; and “constructive activity,” when they cooperate and communicate in order to accomplish shared goals.

Humans evolved these group behaviors after splitting from chimps six million years ago. And apparently, dogs learned from us — because they exhibit the exact same three group dynamics.

While it’s indisputably funny when a dog chases its own tail, you should know the next time you witness this behavior that the dog may well be suffering from Obsessive Compulsive Disorder.

A Finnish study of 368 dogs found that tail-chasing was correlated with a number of other repetitive and compulsive behaviors, such as pacing, snapping at invisible flies, and increased licking. Like obsessive-compulsive humans, OCD dogs were more likely to have been abandoned or treated poorly by their mothers at a young age, and they usually usually developed their compulsions prior to sexual maturity — just like humans with OCD.

In 2009, a researcher at the University of British Columbia conducted a meta-study of previously published research in an effort to determine the upper limits of dogs’ mental capacity. His conclusion? Most dogs are operating on the cognitive level of a two-year-old human being.

To wit: They can count up to four or five, detect basic mathematical errors, develop a vocabulary of roughly 165 words, remember the location of items they value, deliberately deceive dogs and humans for rewards, and operate simple machinery (like a latch).

The upshot here is that if you have a dog and a one-year-old child living in the same home, the dog is probably the smarter of the two.

They Hear The Same Way We Do

While dogs can perceive higher frequencies of sound that humans, their hearing is otherwise quite similar to ours. In another study that involved training dogs to sit still during M.R.I. scans, researchers compared how dog and human brains reacted to various sounds, like car noises, dog barks, human vocalizations and whistles.

They found that a lot of the noises activated similar regions in the brains of both dogs and people. When human voices were played, the temporal pole lit up. When emotionally-charged human sounds, like crying and laughter, were played, an area near the primary auditory cortex lit up. Even emotional dog noises, like barking or whimpering, activated the same neural centers in canines and people.