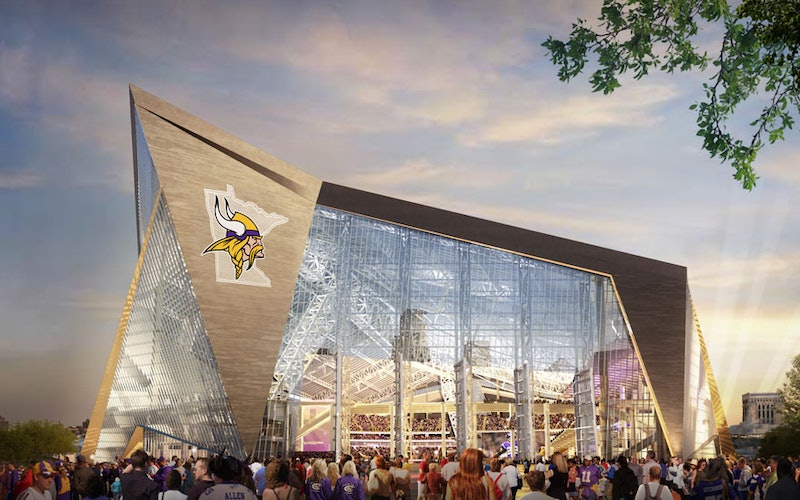 Minnesota Vikings fans are ecstatic about their new football stadium, which is slated to open in 2016. But there are some Minnesota residents — namely, those with feathers and wings — who may be less than thrilled about it. According to the Minnesota's Audubon Society, the new Minnesota Vikings stadium may kill thousands of birds when it opens, all because of its nifty glass design.

Now, it's not like the new football stadium isn't going to be aesthetically pleasing. In fact, it may just be the most beautiful football stadium in America come 2016. The stadium is going to be a towering, gleaming structure with glass walls and even a glass roof. According to the Audubon Society, the stadium will feature nearly 200,000 square feet of glass, which is a lot. Four football fields, to be exact.

The stadium will certainly be a sight to behold. It will also be a death trap for birds, according to Audubon Minnesota executive director Matthew Anderson:

We're talking about a billion dollar stadium here, and the cost to save perhaps thousands of migratory birds — and make the Vikings a global leader in green stadium design — is about one-tenth of one percent of that. Hundreds of millions of dollars of public money is going to build this stadium, and we know the people of Minnesota do not want their money killing birds. The Vikings recently approved spending millions and millions of additional dollars to make sure the stadium is ‘iconic’ — surely they also want to make sure it’s not a death trap. We’re asking them to change their minds and do the right thing.

Minnesota Audubon cites surveys done in Minneapolis on birds colliding into glass windows. According to the group, surveys found that at least 125 different types of native bird species have fatally crashed into glass windows since 2007.

The society recently launched a letter-writing campaign to urge the Minnesota Vikings and the Minnesota Sports Facilities Authority to use a safer type of glass that won't attract so many birds. The society says they also gave the sports authority different types of lighting techniques to use to repel birds. However, both the Vikings and the MSFA reportedly rejected the proposal to switch to a bird-proof glass last week, so they seem pretty content on going with this sparkling yet bird-fatal structure.

According to a 2014 report, between 365 and 988 million birds die from colliding into windows each year in the United States. It's one of the largest causes of bird death, second only to cats, who kill more than one billion birds per year. Although Minneapolis doesn't want to take care of its football stadium-death machine problem, it did take care of its cat problem last year (unfortunately) by creating a "feral cat ordinance" to cut down on the numbers of cats preying on birds in the city.

In any case, football wins.

More like this
Michigan’s Governor Is “Going To Fight Like Hell” To Protect Abortion Access
By Andrea Zelinski
My Picky Eater Dog Absolutely Devours This All-Natural Food
By Allison Berry
If You Have Pets, You Probably Don't Realize You're Making These Common Mistakes
By Mackenzie Edwards
25 Cheap Ways To Make Your Cat 5x Happier
By Claire Epting
Get Even More From Bustle — Sign Up For The Newsletter