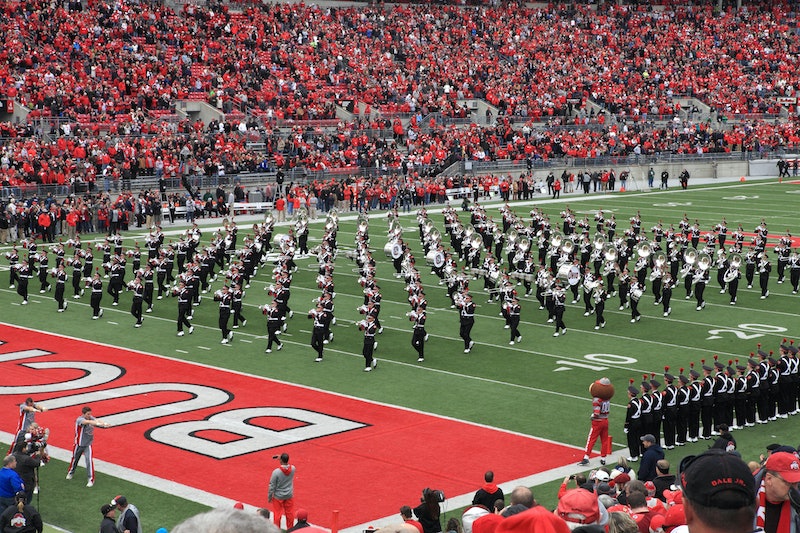 On Thursday, a two-month investigation by the Ohio State University ended with the firing of marching band director Jonathan Waters. Waters was removed as a result of his alleged mishandling and contributions to the "sexualized" culture of the organization. In late May, a concerned parent of one of the band's members came forward to raise concerns about "objectionable traditions and customs," which a 23-page report by the university's Office of University Compliance and Integrity showed to be as numerous as they are inappropriate.

The report is composed of six sections, including the marching band's background, the investigation's scope, and recommendations for corrective action. In the section titled "Culture Allegations and Findings," the report details no fewer than 10 alleged activities that members of the band participated in, either voluntarily or by command.

The first of the alleged activities that lends itself to a sexualized culture is the "Midnight Ramp," an annual activity that consists of "Marching Band members wearing only their underwear marching into the football stadium through the ramp." The entire process, the report claims, was overseen by "staff members, including Jonathan Waters." After learning of the investigation into the band's activities and his role in them, Waters decided to discontinue the tradition in June.

According to the report, each new member of the marching band was assigned a nickname, most of which tended to be highly sexualized. Examples of these nicknames, which are assigned by upperclassmen, but were allegedly sometimes used by staff (including Waters), include Jewoobs (given to a Jewish student with large breasts), Sugarbush, Tits Mcgee, and Twat Thumper.

Though staff members are not supposed to know, much less use, these nicknames, Waters admitted that he was aware that about "50 percent" of the nicknames used were sexual or offensive. When questioned, Waters himself denied ever using the nicknames, though two witnesses have provided testimony to the contrary.

An extension of nicknames, the report states that tricks were performed by individuals, either when ordered to do so (likely by an older member of the band) or voluntarily. Most of these tricks allegedly concerned sexually explicit acts, particularly among women, who make up a mere 21 percent of the band. Witnesses gave these examples of tricks:

While these tricks were never said to be performed in the presence of staff members, their mere existence served as more than enough cause for concern.

While changing clothes in front of the opposite gender is often considered routine practice for many marching bands, some students took issue with Waters' handling of the situation. One female witness reportedly "complained to Waters about having to change clothes on the bus," but alleged that he ignored her.

As a result of the investigation, the Office of University Compliance and Integrity came to two conclusions: first, that "the Marching Band’s culture facilitated acts of sexual harassment, creating a hostile environment for students," and second, that "Jonathan Waters knew or reasonably should have known about this culture but failed to eliminate the sexual harassment, prevent its recurrence, and address its effects."

The report also suggested reviews of the band's leadership, counseling, and periodic "climate checks" to determine the "culture and the concerns of students and staff" in the band. Ohio Attorney General Betty Montgomery will also conduct a second round of interviews and studies as a follow-up on the university's internal investigation.

These findings are certainly a blow to the prestigious marching band, which has won significant praise for its impressive halftime performances. In fact, Waters and his band appeared in an iPad ad earlier this year, and his videos have been viewed several million times on YouTube. But in the face of such serious sexual harassment allegations, OSU is taking steps to reaffirming its commitment to the safety of its students.

In a statement following the announcement of Waters' firing, OSU president Michael Drake said, "Nothing is more important than the safety of our students." And in addressing the sexualized culture of the marching band, OSU is making an attempt to ensure this safety.