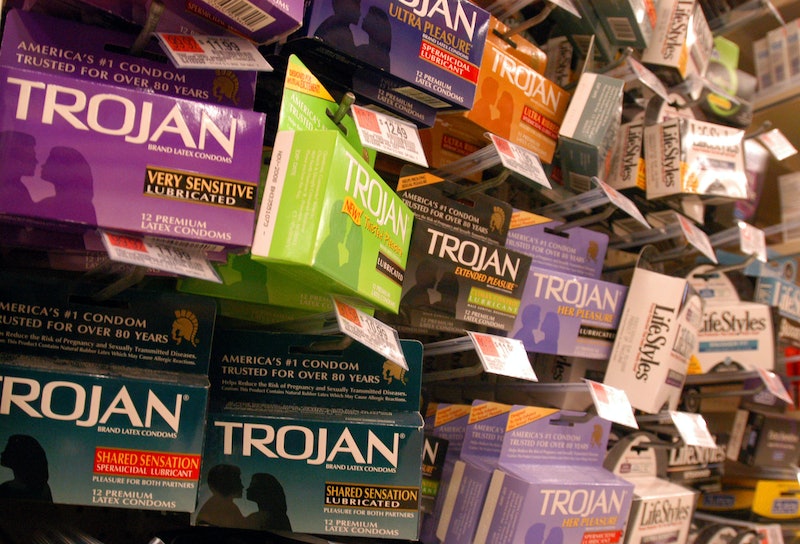 Ladies and gentlemen, the condom just got better. No, it won't make the sex better, but your condom can now kill the HIV virus, and a slew of other STI-causing viruses to boot. By coating those little semen shields with an antiviral lubricating compound called VivaGel, an Australian pharmaceutical company called Starpharma just might have revolutionized safe sex.

VivaGel, which is not sold separately from its condom counterpart, is described by Starpharma as an "innovative antimicrobial agent." Its star ingredient, which makes up only 0.5 percent of the compound, is called astrodrimer sodium, and has been shown to inactivate a stunning 99.9 percent of HIV-causing viruses. Moreover, VivaGel has also been shown to be effective against the virus that causes herpes as well as the human papillomavirus (HPV).

By partnering with Ansell, the Australian company that serves as the second largest condom producer in the world, Starpharma hopes to bring the VivaGel condom and all its medical benefits to eager couples around the world, and they're already gaining traction. Early this week, the Australian Therapeutic Goods Administration — the equivalent of the American Food and Drug Administration — approved the product for sale Down Under.

Australia is the second country to allow the condom onto its shelves, with Japan approving the product in March. Japan, which is second only to the U.S. in terms of its condom market, will market VivaGel alongside its largest condom manufacturer, Okamoto Industries, Inc.

While the condom, planned to be called the "LifeStyles Dual Protect," has not yet been released for public use and has only been tested in clinical settings, a Starpharma press release reports that research indicates high levels of consumer interest. In fact, the company claims that "80 percent of participants surveyed rat[ed] the product as very interesting and more than 90 percent indicat[ed] they would buy it."

The regular condom, without the assistance of the HIV-killing super gel, varies in reports of its effectiveness. While some sources suggest that the condom is effective against STI and unwanted pregnancies up to 98 percent of the time (if used correctly every time), other estimates are much more modest, stating about an 85 percent success rate.

The VivaGel enhanced condom, then, would be hugely helpful in eliminating the risk of STIs, with the 99.9 percent effectiveness of the gel. This is particularly important given the prevalence of these infections and diseases. Herpes alone affects a stunning one in five Americans, and 80 percent of carriers are unaware that they have the disease. Furthermore, men are more likely to pass genital herpes to female partners than vice versa, making the condom especially important for women.

Genital herpes has also seen an increase in infections since the 1970s, with the World Health Organization reporting a 30 percent increase in the disease over the last few decades. But it isn't only herpes — a 2013 CDC report suggested that more than 110 million Americans have a sexually transmitted disease. And around the world, HIV/AIDS remains the leading cause of death for women between 15 and 49.

Each year, an additional 20 million Americans, half of them between the ages of 15 and 24, contract an STI, and the costs of the diseases are growing. Treating these 20 million patients costs an annual $16 billion, and the costs of healthcare don't appear to be dropping anytime soon. But if the VivaGel condom works, it could seriously reduce the number of infections circulated on a year-to-year basis.

Astrodrimer sodium has also been shown to combat bacterial vaginosis (BV), the most common vaginal infection in the world. While antibiotics can fight off BV, if the disease goes untreated, it can increase the risk of acquiring an STI. According to Starpharma's website, "more than 30 percent of HIV infections in women could be prevented if BV was successfully treated."

Of course, as wonderful as the LifeStyles Dual Protect would be, it would only be effective if couples practiced safe sex methods and used condoms. And even if the condom were to be used, VivaGel does not completely protect against it breaking, slipping, or any other mishaps that may occur in the throes of passion.

Dr. Anna-Barbara Moscicki, a pediatrics professor at University of California, San Francisco and an HPV expert, raised another concern to the Huffington Post. Moscicki has researched VivaGel in its application as an intravaginal cream, which would theoretically protect women against STIs without using a condom. While it may have been effective on this front, Moscicki also noted that the cream "caused mild irritation and low-grade inflammation in study participants after two weeks of twice-daily use."

Starpharma CEO Jackie Fairley addressed Moscicki's concerns in an email to the Huffington Post, explaining that the concentration of VivaGel in their product was much lower than that of Moscicki's trials. Whereas Moscicki used a cream containing 3 percent VivaGel, Starpharma's trials used only 1 percent VivaGel, and their lubricant for the condom contains even less at 0.5 percent.

Still, the effectiveness of the condom has yet to be seen. With a little bit of luck from the FDA, maybe you'll be able to test the LifeStyles Dual Protect for yourself before too long.

More like this
25 Quotes About Love To Share During Pride Month 2022
By Madeleine Aggeler and Emma Garza
How To See The Lunar Eclipse On May 15-16, 2022
By Kaitlyn Wylde
Here’s How To Deal With Sexual Frustration If You Don’t Want Casual Sex
By Annakeara Stinson and Mackenzie Sylvester
Here’s How To Reignite The Spark In A Sexless Relationship
By Vanessa Marin
Get Even More From Bustle — Sign Up For The Newsletter