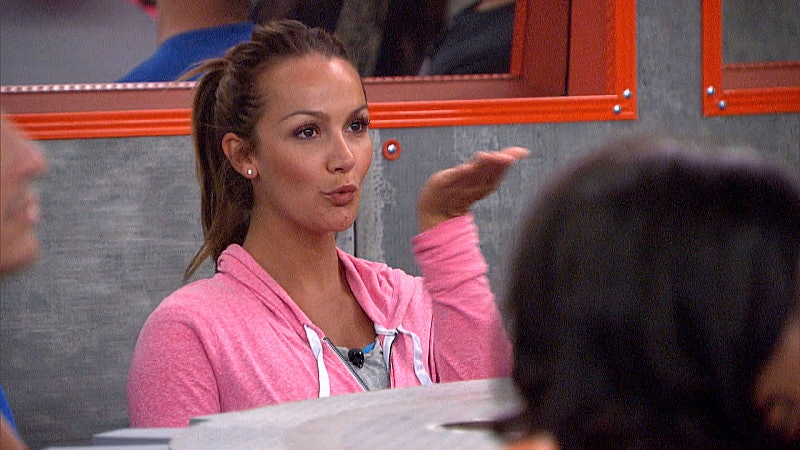 Well, it finally happened. It seemed like this season's Big Brother houseguests tried to get Brittany out just about every week, and during Thursday night's live eviction, they finally evicted her. Cody and "The Detonators" had planned to get her out, and things actually went according to plan, even if Cody did give us a heart attack by putting our beloved Donny up on the block. You were a fierce competitor, Brittany, but unfortunately we just couldn't let go of Donny just yet. I'm sorry to say it was your time.

It's clear to see why the other houseguests wanted Brittany to go so badly. She was a physical threat, competing well in competitions, like the first Battle of the Block. Her social game was also strong, convincing Devin to use the Power of Veto on her when it looked like she was as good as gone. Plus, you didn't want to mess with Brittany. We all saw the shade she threw at Victoria about the sleeping situation, mmmkay?

The house was pretty quiet as they said their goodbyes to Brittany. It was amicable all-around with seemingly no hard feelings. Well, probably except for Brittany, who was upset to leave. When Brittany sat down with host Julie Chen, she was emotional about her departure from the show. However, she was overall in good spirits and glad to be leaving. All season, Brittany had mentioned that she was sacrificing a lot by being in the house because she couldn't be at home with her three children. She struggled with whether or not dealing with all of the craziness, showmances, and drama to win $500,000 was worth missing a summer with her family. So when Brittany said she was actually happy to go home, it was easy to see why.

And then the most heartwarming moment in all of Big Brother happened. After her exit interview with Brittany, Chen had some special guests for her. Brittany's three children came walking in, and she immediately gave them a huge, loving hug. You could audibly hear Brittany sobbing over being reunited with her family because she was overjoyed at seeing them. I don't often get emotional when watching Big Brother, but I have to admit it, that was pretty darn cute.