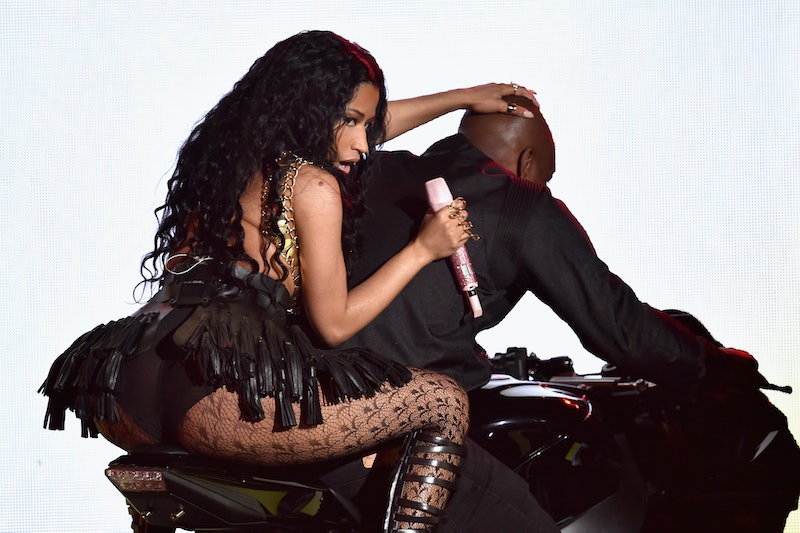 It's quite likely that Nicki Minaj is about to launch a #FreetheBooty campaign. Minaj turned her usual amount of heads on Thursday when she posted the cover art for Minaj's single "Anaconda" and then turned even more heads due to the very, very, very not safe for work butt shot that said cover art displays. The Internet basically exhausted its collection of ass cracks (Get it? Jokes about butts? Okay, bye...) and speculated about how exactly this vaguely pornographic shot was supposed to fit in with the newer, simpler, more demure Nicki Minaj that she has been since the start of 2014. However, Minaj had a few choice words to send out to all of her haters — or, should I say, a few choice pictures. Thursday night, Minaj responded to the "Anaconda" backlash on Instagram with a series of photographs that call attention to the hypocritical nature of the controversy.

Essentially, Minaj compares her cover art with several model shots from magazines and magazine covers, displaying the models' butts in bathing suits and bikinis of varying states of coverage. Each shot is labeled with the tag "acceptable". Minaj followed this by posting her "Anaconda" cover art again with the tag "UNACCEPTABLE".

The thing is, Minaj's response kind of misses the point of some of the controversy. After all, comparing this cover art to the cover art for "Pills N Potions" is a perfect way to see how much more attention-seeking the "Anaconda" cover feels. However, it could be that Minaj doesn't care to respond to that aspect of it at all because it's not like she has ever made any claims about not enjoying attention. This is the woman whose outfits used to rival — and occasionally surpass — anything Lady Gaga leaves the house in, after all. It's not exactly a negative trait in a celebrity to enjoy having all eyes on her.

However, the fact that Minaj only chose pictures of white models to illustrate her point makes it unclear if she was attributing this controversy to racism or to slut shaming. The way Minaj has these photos set up, it could be argued that she believes the only reason anyone is criticizing the cover art is because Minaj is black and not because Minaj is barely dressed on it. After all, these models all got away with doing the same shot without this much hell being raised.

If Minaj believes that her single cover is only getting spoken about because, as the lyrics of Kanye West's "Good Life" would put it, she has "more ass than the models", then I'm not sure where she got that idea from. While she's correct that it's hypocritical for there to be backlash over this when many swimsuit magazines have similar photographs and it's far from the most explicit thing Minaj has ever done, not everything can be blamed on racism. Sometimes it's just good old slut shaming at work.