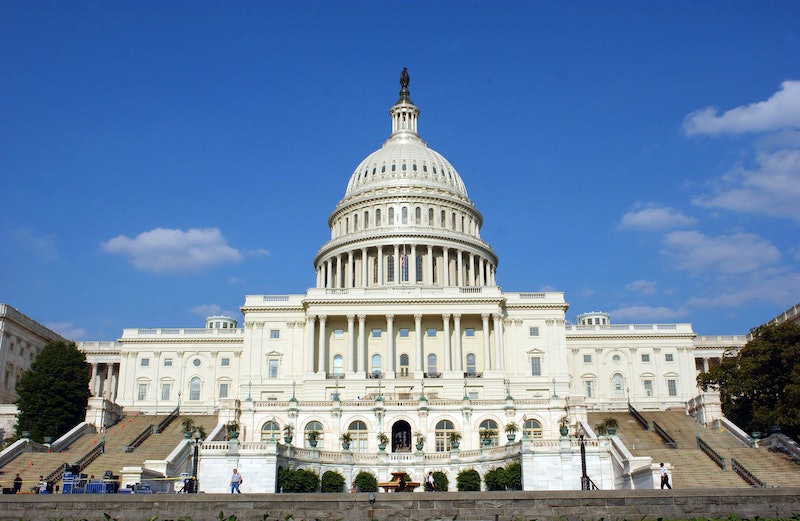 Like it wasn't weird enough that Congress has been editing random Wikipedia entries. Now, Congress has been banned from editing Wikipedia entirely after making some "disruptive" changes, like suggesting that former Secretary of Defense Donald Rumsfeld might be an "alien lizard who eats Mexican babies." Who knew House staffers were such pranksters? As a result, Wikipedia has enforced a 10-day ban on the Congress IP address where these edits stem from, affecting thousands of staff members — and they're not happy about it.

Earlier this month, developer Ed Summers created a Twitter bot that posts anonymous Wikipedia edits made by Congress in real time. The edits posted on the @Congressedits Twitter feed have been wide-ranging, seemingly unrelated, and completely random. For example, Congress changed the entry on horse head masks to include an instance where President Obama shook hands with a man wearing such a mask in Denver. While absolutely puzzling, the early edits caught by the Twitter bot were nothing too scandalous.

That all changed in recent weeks when edits became increasingly juvenile and disparaging, reaching troll-level status. The boiling point for Wikipedia administrators was when someone inside Congress changed the entry for website Mediaite, calling it a "sexist transphobic news and opinion [[blog]] ... that automatically assumes that someone is male without any evidence."

In a statement issued to the Washington Post, Katherine Maher, chief communications officer for the Wikimedia Foundation, said:

[The] temporary, 10-day block on the IP address associated with the U.S. Congress [was] due to disruptive editing originating from that address.... According to the entry for Disruptive Editing, it is a 'pattern of editing' that disrupts the process of 'improving an article or building the encyclopedia.'

While we can't be sure whether Wikipedia considers the following edits "disruptive," they are certainly some of the weirdest ones Congress has made.

The Assassination of John F. Kennedy Was Ordered By Fidel Castro

In the entry for the assassination of U.S. President John F. Kennedy, a House staffer added that both Lee Harvey Oswald and Jack Ruby were acting "on behalf of the regime of Fidel Castro."

Castro Also Had a Hand in the Moon Landing Conspiracies

The entry for the U.S. moon landing conspiracies was edited to say that they were "promoted by the Cuban government."

This Ukrainian Politician Is a 'Russian Puppet'

Former Ukrainian presidential candidate Nataliya Vitrenko's Wikipedia entry was changed to say that, in addition to being a politician and scientist, she was a "Russian puppet."

Donald Rumsfeld Is Not of This Earth

Perhaps the most troll-like change was made to former U.S. Defense Secretary Donald Rumsfeld's entry, which described him as an "alien lizard who eats Mexican babies." The edit even included a source citation for the alien lizard claim.

In an exchange between Wikipedia administrators and House staff using the IP address in question, it is clear that Congress is not happy with the ban.

Out of over 9000 staffers in the House, should we really be banning this whole IP range based on the actions of two or three? ... Some of us here are just making grammatical edits, adding information about birds in Omsk, or showing how one can patch KDE2 under FreeBSD.

When Wikipedia suggests creating a personal account from a different IP address, another House staff member (it is unclear if it is the same one from above) replies, "I have one, but I don't sign into with my password at work. Theoretically people could find out who I am, but good luck, I'm behind seven proxies. Haters gonna hate."I don't know about you, but that sounds like a troll right there. Images: Getty (2)

More like this
TikTok’s “Miley Stewart Summer” Trend Will Make You So Nostalgic
By Courtney Young
Why Can’t I Go Live On Instagram?
By Emma Carey
How To Add Music To An Instagram Post
By Emma Carey
Using Your Pet’s Name As A Password? Here’s Why You Might Want To Change It
By Cristina Sanza
Get Even More From Bustle — Sign Up For The Newsletter