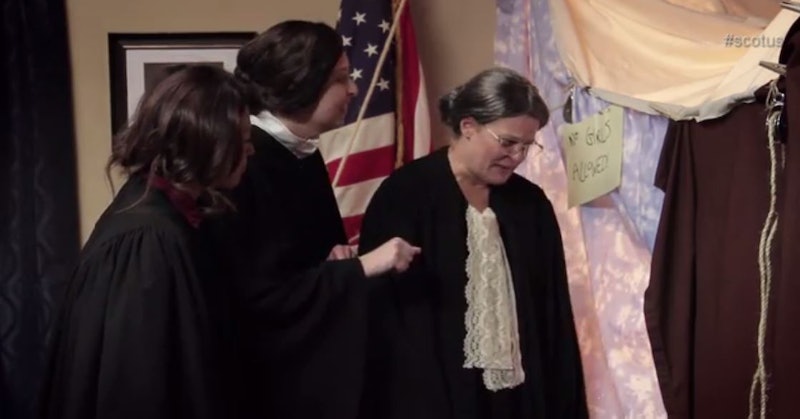 The Supreme Court is frequently called an “old boy’s club,” a designation which never seemed more fitting than it did following the Hobby Lobby ruling at the end of June. But believe you me, we had no idea exactly how much of an old boy’s club it was until now. Funny or Die has released their take on the whole thing, a video titled “Supreme Court: No Girls Allowed,” and it’s as laugh-out-loud hilarious as it is thought-provoking.

We open on the Judges Chamber of the Supreme Court — although you’ve probably never seen the Judge’s Chamber like this before. Rather than being seated around the huge and dignified table in the middle of the room, the male judges have all packed themselves into a blanket fort (complete with action figures and issues of Playboy) as they make their decision about Burwell v. Hobby Lobby. What happens when Ruth Bader Ginsburg, Sonia Sotomayor, and Elena Kagan show up to try to argue their point? Madness. Absolutely madness. But don’t take my word for it; watch it for yourselves. FYI, Martha Plimpton as Ruth Bader Ginsburg is the best thing ever:

Ladies and gentlemen, there you have it: The Supreme Court is actually the official, government-sanctioned branch of the Get Rid Of Slimy girlS club from Calvin and Hobbes.

Like all good comedy, though, “No Girls Allowed” makes a bunch of solid points. “Isn’t it weird that you’re all voting on women’s issues and all of the female justices disagree with you?” says Plimpton-as-Ginsburg — and she’s absolutely right. She’s also right when she says “I wish that were true” in response to the men declaring, “We don’t vote about stuff we don’t understand.” Even the other male justices’ treatment of Stephen Breyer, who dissented with Ginsburg, Sotomayor, and Kagan, speaks volumes.

They do have a pretty sweet blanket fort, though. I’ll give them that.