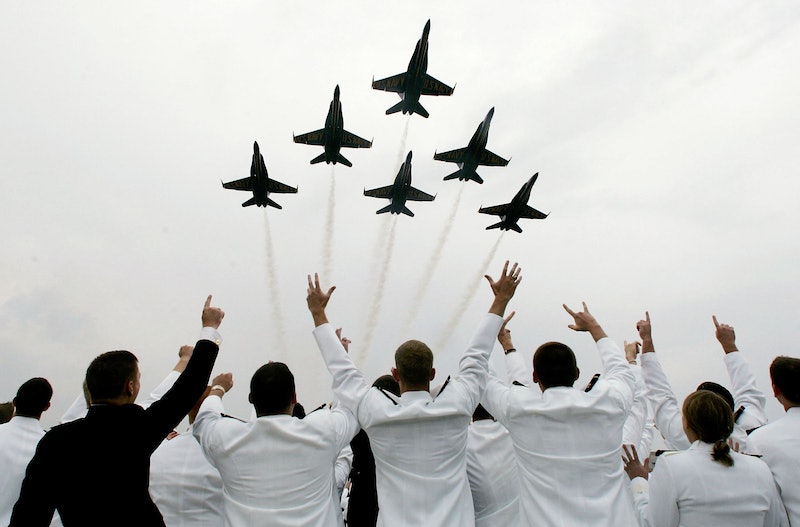 If you've ever watched a Blue Angels demonstration, you've probably wondered who on earth was flying those jets. And if you've pictured a woman, you'd have been wrong, but not for long. Marine Capt. Katie Higgins is about to become the first woman to perform in the Blue Angels, the popular moniker for the U.S. Navy Flight Demonstration Squadron. While Higgins, 27, isn't the first female squadron member — Navy Lt. Cmdr. Amy Redditt Tomlinson became the first female to join the Blue Angels in 2010 — she'll probably be the first to perform in a demonstration.

"Honestly, I was in shock," the 2008 Naval Academy graduate told the Baltimore Sun about hearing the news. "It was something I had dreamed about for a while, and to have it come into fruition was amazing."

Higgins's addition to the Blue Angels breaks the glass ceiling for two reasons: Besides possibly becoming the first female Blue Angel to perform, she will be joining the squadron alongside Marine Capt. Corrie Mays, marking the first time two female Marine Corps officers have been selected to join the squadron at the same time. While Higgins is listed as a demonstration pilot, it appears Mays will be taking on the role of events coordination office, and it's unclear whether she'll also get to perform.

According to the Baltimore Sun, Higgins will be flying the C-130 Hercules cargo plane known as "Fat Albert," which is a bigger aircraft that flies slower and lower than the jets at air shows. It's a task that will surely come naturally to Higgins, whose father, two uncles, and grandfathers were all pilots. Higgins is expected to start training in January, with her first performance scheduled for next March.

Unfamiliar with the Blue Angels and their spectacular air demonstrations? Here you go...