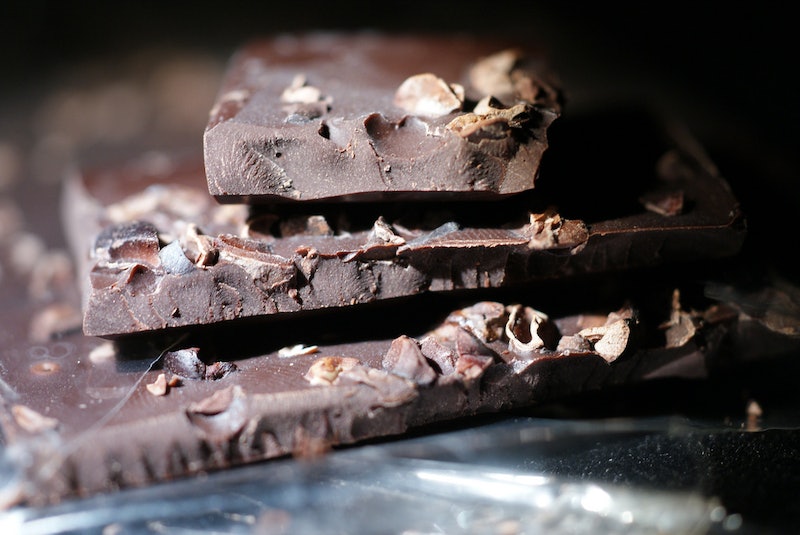 We’ve been hearing for a while now that it’s OK to indulge in our cocoa cravings every now again, because the good quality dark chocolate is good for you; not knowing exactly why it’s good for us, though, has been taking some of the wind out of our fudgy sails. But hey, guess what? We’ve finally got some answers, and lo and behold, it’s true! Dark chocolate is good for us! Here’s the science to back it up.

Fact: People who eat dark chocolate regularly tend to have lower levels of heart disease than people who don’t. Why? Because dark chocolate has lots of flavonols which, when consumed, lead us to develop anti-inflammatory bacteria in our guts. It’s only recently, though, that we’ve discovered that the reason flavonols have this effect is due at least in part to the fact that dark cocoa powder is indigestible.

Policy Mic cites two recent studies that paint the big picture for us. The first, which was conducted Louisiana State University, took a look at how cocoa works its way through the body once it’s been consumed. I’ll spare you the gory details, but essentially they built an artificial human digestive tract so they could follow chocolate through it. Once it got to the stomach, the digestive enzymes present started breaking down and separating the components of the chocolate. The stuff that didn’t get digested fermented, becoming substances that help lower cholesterol and promote high levels of good probiotics.

The second study, conducted by Virginia Tech, found out what happened to lab mice when fed specific diets. Although all the subjects were fed a high-fat diet, the mice were also divided into two groups: One group was given unsweetened cocoa flavonol extract, while the other got a variety of flavonols extracted from the chocolate. After 12 weeks, most of the mice weren’t in great shape (the poor things were well on their way to developing diabetes); a few, though, were markedly healthier than others. All of the healthier mice had been given a specific flavonol group — the type we get when we eat dark chocolate.

Of course, there are a few downsides here. First off, chocolate bars have a lot more in them than just cocoa, including milk, sugar, and all sorts of other less-great-for-you ingredients; and second, chocolate, like iced coffee, is getting stupidly expensive these days due to the soaring prices of cocoa beans. A few common sense guidelines will help offset these problems, though: Just remember that a little goes a long way, and that dark chocolate has way more of the good stuff than milk chocolate. If you’re going to splurge, though, you can’t go wrong with these ‘smores-inspired treats. Bon appetite!