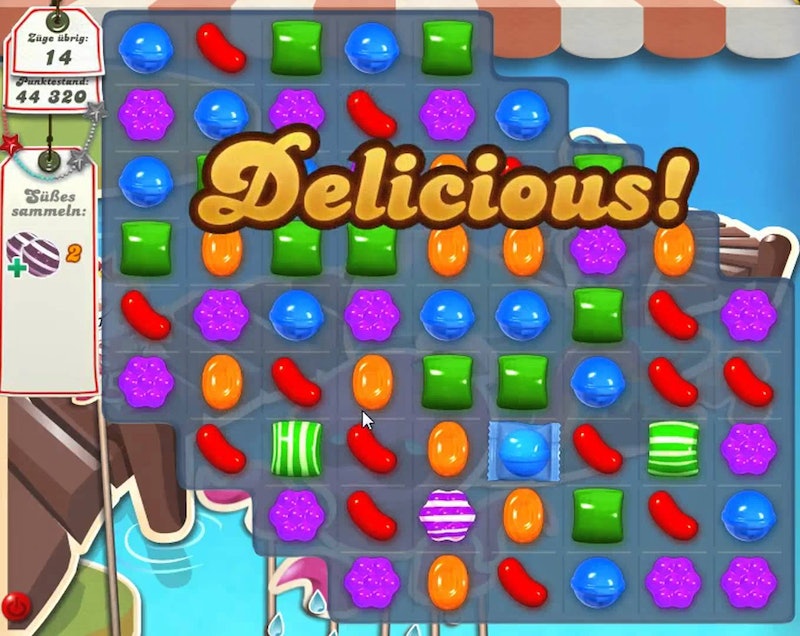 "Sweet!" "Tasty!" "Delicious." After only three levels of Candy Crush Saga, I'm already a little traumatized by that deep voice. Don't even get me started on the colors, the jumping characters, and the candy, the never-ending candy — they just keep coming and coming, they never stop coming! So it is basically a miracle to me that Prime Minister Erna Solberg of Norway has cleared Candy Crush level 300. That would be an impressive feat for someone who works at the video store, but she's the leader of a country. How does she find the time? More importantly, how has she kept her sanity?

Well it seems like she might be on the brink, because Candy Crush Saga has been known to push its players.

"Right now, I'm a bit fed up. I reached level 300 and I haven't played for a few weeks, but it'll come back," Solberg told Norway's Aftenposten newspaper.

Oh, you'll be back all right. They always come back for more. According to a report in the Guardian, there is scientific evidence for why Candy Crush is so addictive. Besides being so easy that a toddler could play it, the game is designed in a way to distribute rewards in measured increments, aka the levels. Each time a player clears a level, the game's characters go crazy congratulating you, showing you all the lowly Facebook friends who you just beat.

God, how embarrassing for you, Josh. Six thousand points is just pathetic. And as your brain processes these rewards, it releases dopamine, the same pleasure chemical released when addicts get their fix.

Prime Minister Solberg is just one of 93 million people who play the game every day, but judging by the fact that there are strategies online for clearing level 100, I'd surmise that she must be somewhere in the top 98 percentile of Candy Crushers. But just how has Solberg found the time to reach that status since being elected prime minister last September and taking office last October?

"It is relaxing to play Candy Crush and other relatively uncomplicated games," she told Aftenposten. "In a hectic election campaign there will not be much time for it, but sometimes I take the iPad with me on a plane or in the back seat of the car." I'm picturing Solberg swiping jelly beans in between appointments, and maybe occasionally under the table when there's a lull during a foreign policy meeting.

According to the Candy Crush Wiki page, the game currently holds 985 levels. If Solberg keeps up her gaming habit, she could be well on her way to clearing all 985 levels before Norway's next parliamentary election.