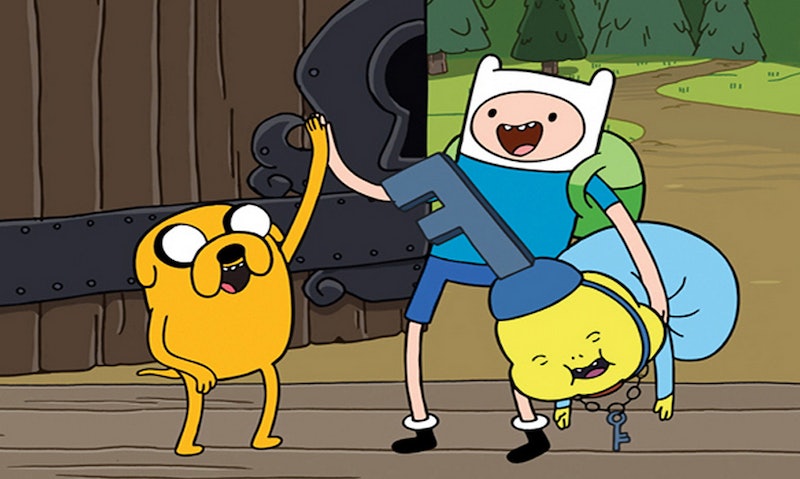 OH MY GLOB! According to The Hollywood Reporter, Cartoon Network renewed five of its animated series. Drumroll, please! Regular Show, Uncle Grandpa, Steven Universe, and Clarence made the Cartoon Network cut. What's that? You say I only listed four shows? Silly me, I can't remember the fifth sh— SIIIIKE. There's no way I'd ever forget the brilliant, bizarre, and award-winning piece of programming that is Adventure Time. Jake the dog, Finn the human, and the rest of the beloved Ooo-dwellers will keep on keepin’ on for a seventh season. Yup, Adventure Time has been renewed. Slam bam in a can!

I booked the first available flight out to the Land of Ooo so I could talk to the Adventure Time characters* about Season 7. Many of the AT characters showed up to the impromptu interview party at Finn and Jake's treehouse, but of course, there were a few who couldn't attend. Cinnamon Bun wound up getting lost on the way to the treehouse, so he missed the party entirely. Peppermint Butler did not stop by either, but Jake said it was only because PB's butler was in another dimension and could not be reached.

I most certainly missed those two, but the turnout was pretty terrific. I was welcomed to Ooo with open arms and I can't wait to go back.

Hey, Finn and Jake! Did you read the THR story? How does it grab you?

Right there with you, Finn.

How amped are you, Lumpy Space Princess?

Hey, Princess Bubblegum! Season 7! You must be so proud.

Celebratory spaghetti? I can dig it. Like your style, PB.

Hi, BMO! Are you partaking in a celebratory plate of spaghetti, too?

I appreciate your honesty.

Hey there, Ice King. Another season of mayhem, eh?

I must hand it to you, Ice King. You always know how to make it weird.

Marceline, I really appreciate you taking the time to talk to me. Season 7! Your feelings?

Aw, man! You're genuinely stoked. And to think I was worried you'd make a freaky face at me.

Aaaaand there it is.

Oh, hi. Didn’t see you there, Lemongrab. Anything you want to add?

I’d expect nothing less from you.

Any last thoughts from the Land of Ooo?

*Just kidding, I consulted the vast collection of Adventure Time GIFs available on the Internet.