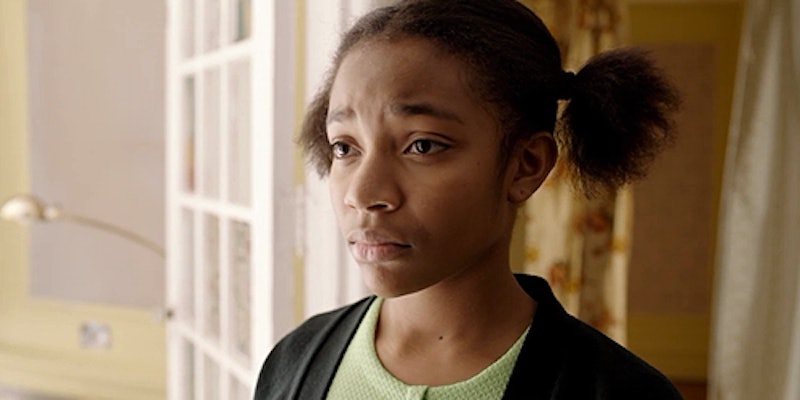 The character of Miss Claudette Pelage, the complicated bad ass in Netflix's surprise hit Orange Is the New Black , introduced a grossly overlooked aspect of human trafficking to millions of viewers: There are other types of trafficking in the U.S. besides sex trafficking.

Though it’s hard to quantify such a clandestine industry, it’s been estimated that there are roughly 27 million people involved in human trafficking across the world, 21 million of whom are trafficked into forced labor. (Still, most anti-trafficking campaigns, policies, and initiatives are focused on sex trafficking.)

In Claudette's back story episode [Spoiler Alert!], it's revealed she was a victim of labor trafficking and was forced to clean rich people's homes to pay off her "parent's debt." In a even bigger twist, we find out she grows up to traffic women herself.

Why would someone who is trafficked turn around and traffic someone else? Sharon Buchbinder RN, PhD seems to think it's mostly about gender. She wrote this week on The Daily Beast:

Because of their familiarity with the lifestyle, network, and recruiting methods, women can lure others to work for them and their associates with promises of a good life. The women in the NIJ report were in their mid-forties, the age of most teenagers' mothers. Our society doesn't expect women to be predatory. It's easier for these women to slide under the radar, perhaps even pass themselves off as victims, too, if an arrest is made. Children have been socialized to trust women more than men. People who are perceived as being in a position of trust have an even greater advantage. A runaway girl will trust a friend's older sister or mother to take good care of her; she will not expect to be sold to a pimp. A foreign-born woman seeking a better job will trust a minister and his wife.

It's not that simple. (Actually, nothing about human trafficking is simple.) However, Buchbinder does brush upon what is a more accurate explanation for why victims of trafficking can become traffickers themselves: lack of opportunities. How is someone who's lived a life of forced servitude supposed to make a living?

Underdevelopment (lack of access to steady employment, health, and education) can lead people to go through informal channels for survival. These conditions breed the illegal economy of human trafficking.

The complicated truth is that human trafficking is successful largely because of the amount of people out there who want a better economic life. With lack of opportunities or resources at home, people risk their lives to gain opportunities elsewhere. Unfortunately, when this is done through said informal channels, people are easily exploited and forced into unwanted situations with little to no protection.

Anti-trafficking efforts need to explicitly address the connection between lack of opportunities and human trafficking as opposed to its current focus on prosecution and security. Until then, we might keep ending up with more Claudettes.

More like this
The Music Industry Continues To Fail Black Women
By Precious Adesina
'Who Killed Sara?' Won’t Return For Season 4
By Brad Witter
20 Photos From The 'Stranger Things' Season 4 Premiere To Make You Feel Old
By Alyssa Lapid
Will Viewers Revisit Welcome To Eden For Season 2? What To Know
By Kadin Burnett
Get Even More From Bustle — Sign Up For The Newsletter