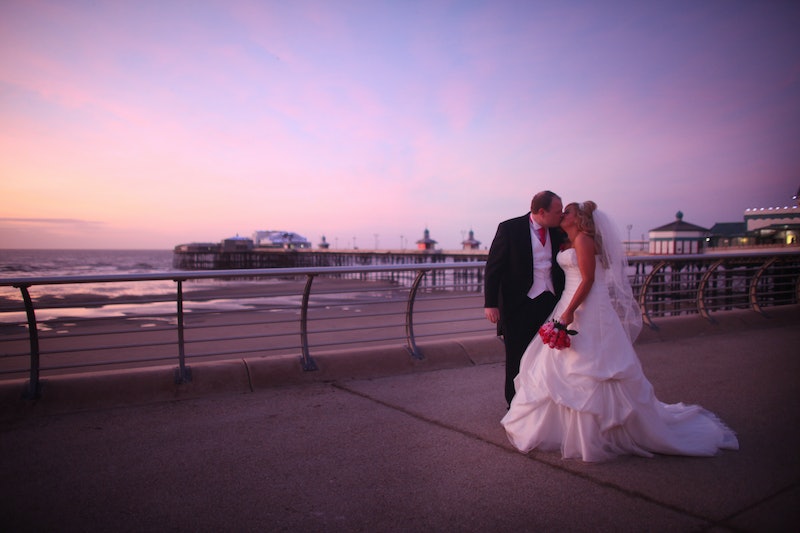 It's a well-established stereotype that women obsess over weddings, but there's new data suggesting that the stereotype is basically true: According to Mashable's recent report, "Here Comes the Social Networking Bride," 70 percent of today's brides were pinning to wedding boards on Pinterest before they were even engaged.

Statistics released in May also show that an overwhelming majority of Pinterest users are still female. As reported recently in VentureBeat, although women make up about 80 percent of Pinterest's user base, 92 percent of pins are created by women (i.e. there are some men using the social network, but they aren't very active).

So why are the ladies so keen to make Pinterest boards of weddings they might not even ever have? (after all, marriage frequency is falling quickly to historic lows in the United States). One possibility is that women are just moving their wedding scrapbooks online, and would have kept paper ones otherwise. My best friend in the sixth grade already had such a scrapbook by age 11, and she did eventually get her chance to make that wedding come true (twice, in fact).

But, because Pinterest is so easy to use, it is also probably the case that some people who wouldn't have otherwise preemptively obsessed over wedding details now do — keeping track of them is merely a one-click process. And that beautiful-but-depressing Pinterest wedding board is sitting there waiting for you, at any times of discouragement, jealousy, or anxiety. Click, click, click... worry, worry, worry.

I'm concerned that, by planning a wedding too far in advance (whether on Pinterest or not), women build themselves up to be more excited about the event than interested and invested in the relationship itself. Pinterest and other social media sites don't create our anxieties about marriage, family, finances, and long-term quality of life, but they sure can stoke them.

Also, women who have planned their weddings in advance (alone) seem more likely to become bridezillas about all the details, which in reality will need to be negotiated with the groom-to-be. Is that what you want, to obsess in front of the computer over an event that may never happen at all, and which definitely won't happen just the way you planned it? I didn't think so. Step away from the Pinterest board already.