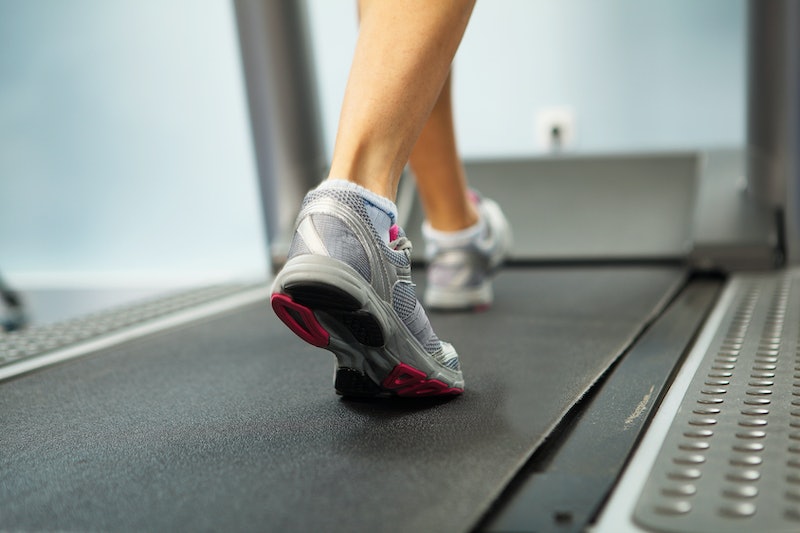 First we heard about standing desks, because sitting too much and living a sedentary lifestyle promote obesity. But you might want to get a treadmill desk instead, because the situation is even more dire than we thought: Continuing studies on the effects of too much sitting suggest that "sitting is the new smoking," in that the two practices have similar levels of negative health risks. Moreover, you need not just to be standing but also moving, so maybe a treadmill desk will save your life.

A new book, Get Up! by James A. Levine, MD (inventor of the treadmill desk and Director of the Mayo Clinic/Arizona State University Obesity Solutions Initiative) explores this topic in depth, drawing together the best current research on the risks of a sedentary work and personal life. In addition to the enormous physical risks of sitting, sitting makes our minds work less well, too.

Dr. Levine had the opportunity to put his theory regarding sitting, standing, and health into practice when a human resources company contacted him for help with its lab, used to investigate the effects of office environments on workers. The lab office was modified to contain a walking track and a set of treadmill desks. Over time, the results of a more active office were staggering, as reported in the DailyMail:

The entire atmosphere changed. When people get out of their chairs, they blossom like they’ve just come out of prison. I witnessed one-on-one meetings on the walking track. And I noticed the few chairs left out were used only for breaks.

Managers said staff seemed more self-confident and were taking on new challenges. One told me: ‘Everyone’s just been happier.’ Not only was weight declining so too were body fat, blood sugar and cholesterol levels. Also, as fat melted away, muscle mass was increasing. The most unexpected gain, however, was that not only had productivity improved by 15 percent but the company also had its best quarter’s performance ever.

So it appears that more standing and walking (and less sitting) not only benefits individuals' health, but also improves companies' bottom lines. This happy coincidence should lead to more workplaces adopting flexible policies and buying some more active furniture, but this may take some time, as institutions are all too often slow and ineffective at changing themselves.

How well are general efforts working so far to get Americans standing more? Until I went looking for it just now, I had never heard of "JustStand.org," a campaign to combat "sitting disease," but hey, at least it exists. Standing desks appeared in the New York Times in 2008 but still seemed like kind of a niche interest until Lifehacker publicized them, and that was a few years ago now.

In 2013, the American Medical Association recommended that offices not force workers to sit all day, but that's unfortunately not a binding instruction. If evidence continues to mount that sitting dramatically harms people's health and even shortens their lives, then maybe providing standing and treadmill desks and standing/walking breaks will become the sort of workplace protection OSHA regulates in the future.