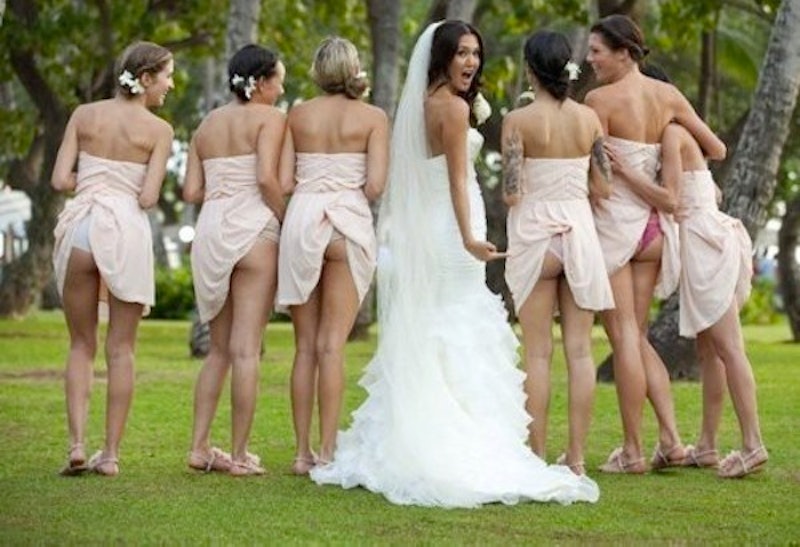 And today in weird ways the Internet lies to us, we have this: Remember that wacky wedding photo trend that started circulating in June? Y’know, the one featuring brides and their bridesmaids hitching up their skirts and posing for pictures with their arses to the wind? Well, it might not be so much of a “trend” after all. I might not go so far as to call it an outright hoax; however, it’s definitely not a fad in the “everyone is doing it and it’s totally crazy” sense.

Don’t get me wrong — a lot of the photos making their way around the blogosphere are real wedding photos. But according to Cracked, who recently ran a piece debunking a bunch of B.S. stories circulating the Internet, these bare-arsed bridesmaids aren’t hopping on a wild and crazy bandwagon hurtling its way through the wedding industry. It’s not a trend, you see; it’s just a collection of photographs taken over the course of a number of years and assembled such that, when viewed together, look like a trend. And again, many of the pictures cited actually did come from real-life weddings (even if they happened a few years ago) — except for one of them. The image of the bridesmaids in hot pink dresses going totally nude from the waist down apparently hails from a (very NSFW link coming up) porn flick called Ass Galore. So, y’know... there’s that.

It sounds a little weird to talk about their being “degrees” of hoaxes, but I think what made this one particularly believable is the fact that most of those photos were real. Putting together a hoax like this is kind of like the reverse of good academic or scientific research: Rather than conducting the research, then looking at all the pieces and seeing what they tell you about the big picture, the conclusion was arrived before the research was even begun. Then whoever kicked the hoax off in first place went looking for specific pieces of evidence that support the claim. I would argue that “We Still Coming” is a little more hoax-y than the bridesmaid butt trend; but then there are flat-out lies like Balloon Boy (remember that one?) that blow all these pseudo-hoaxes out of the water.

Anyhoo, the moral of the story is that a few photographs do not a trend make. But hey, if you want to flip up your skirt and snap a photo of it at your wedding? Go for it. It’s your day, after all!

More like this
I Spent 2 Years Trying TikTok’s Dating Advice
By Kailynn Johnson
Learning To Love, Not Judge, The Lunchbox Wives Of TikTok
By Esther Zuckerman
How To Turn Off TikTok Profile Views So You Can Stalk Other Accounts In Secret
By Alexis Morillo
An Expert Weighs In On The Viral Raw Carrot Salad Trend
By Alexis Morillo
Get Even More From Bustle — Sign Up For The Newsletter
From hair trends to relationship advice, our daily newsletter has everything you need to sound like a person who’s on TikTok, even if you aren’t.