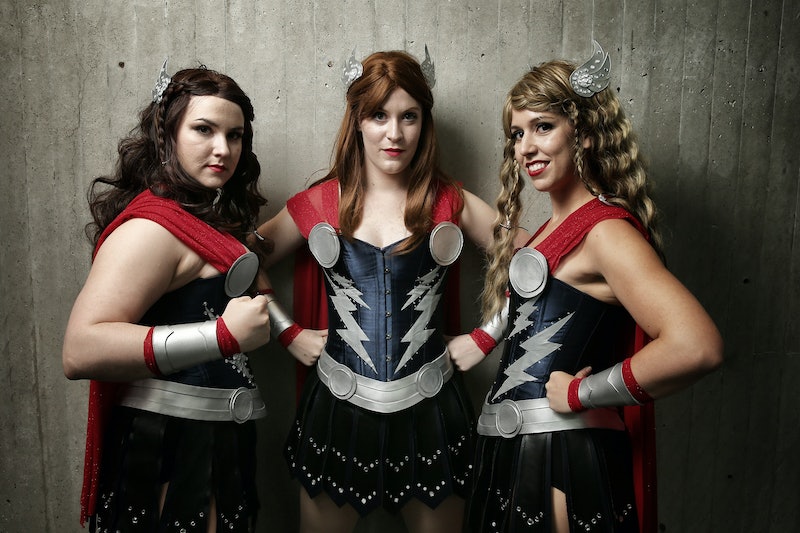 Believe it or not, women are interested in comics. So why do they still have to fight for respect in the comic book world, especially at premier large-scale conventions like Comic-Con? Three Philadelphia women are petitioning Comic-Con to adopt an anti-sexual harassment policy after alleging that they and other female attendees were groped, stalked and photographed without consent at America's largest gathering of self-proclaimed comic book geeks.

The charge is being led by Geeks for CONsent, an anti-sexual harassment organization founded by three Philadelphia women and "avid geeks" Rochelle, Erin, and Anna. According to the organization's website, the women were formerly behind HollabackPHILLY, a chapter of the national anti-street harassment group Hollaback!.

With the message "Cosplay =/= CONsent," the organization is hoping to counter Comic-Con's prevailing anti-women behavior through an online petition, which has amassed more than 2,600 signatures. The petition urges the convention, which holds its national convention in San Diego each summer, to create a formal policy against sexual harassment:

Cons should be about celebrating our favorite games, stories and characters freely and without judgment. But for many fangirls, women and LGBTQ cosplayers, going to cons often includes sexual assault and harassment. Comic Con has refused to create a full harassment policy. Will you join us in demanding a harassment-free Comic Con in 2014?

Geeks for CONsent allege that Comic-Con has created a culture of sexual harassment, and that this type of behavior is rampant among the national and regional events. According to the group, convention-goers have had upskirt photos of them taken without their consent; have had their breasts and other body parts grabbed; and have been followed around the convention by men.

The group adds that many women who attend the event are now considering dropping certain costumes. Many female Comic-Con attendees have also insinuated that the annual convention has done nothing to show support and respect for its female fans. Although recent superhero movies have featured kick-ass women characters like Black Widow and Wonder Woman, convention-goers said women are still overwhelmingly treated as scantily clad props to promote men.

As a way to end this grossly illegal behavior, Geeks for CONsent outlined the ways in which Comic-Con can revise its policies:

However, Comic-Con told The Associated Press in a statement that it doesn't need to adopt a formal sexual harassment policy because it already has a Code of Conduct. This code is listed under "Convention Policies" on the event's website.

"Attendees must respect common sense rules for public behavior, personal interaction, common courtesy, and respect for private property," the Code of Conduct reads. "Harassing or offensive behavior will not be tolerated." It adds that any convention-goer in violation of the code may have their badge revoked.

However, the code does not explicitly state what qualifies as "harassment," nor addresses any behavior that may be sexually charged. For example, does a code this vague ban taking pictures of someone's behind without their consent?

Comic-Con says that anyone who feels unsafe or has been harassed can file a direct complaint. However, Geeks for CONsent allege that Comic-Con needs to do better with handling sexual harassment-specific complaints, which is why the founders are urging Comic-Con to train its staff members on sexual violence.

In the meantime, the group has been urging those who have been harassed at last weekend's convention to share their stories via social media platforms to create awareness of violating behavior. The group also placed its sexual harassment policy throughout the convention, including in women's restrooms. The flier had the Comic-Con logo printed on the top, though it was, of course, an unofficial policy.

Unfortunately, not everyone takes female cosplayers' call for a harassment-free space seriously. On Friday's broadcast of MSNBC's Ronan Farrow Daily, actor-comedian Lea DeLaria of Orange Is The New Black mocked Geeks for CONsent and other female Comic-Con attendees for essentially wasting their time on what she believes is a trivial, non-feminist issue.

"I think as a feminist, [the comic industry] is the first place we need to start," DeLaria said. "That's the important issue in terms of sexual harassment. I'm really glad that all the money they spent getting their women's studies degree from Smith has come in handy."

More like this
24 History-Making Black Women You Probably Didn't Learn About In School
By Ayana Lage and JR Thorpe
Here’s Where The NHS Nurses’ Strike Currently Stands
By Sophie McEvoy
6 Organizations Fighting Police Brutality That You Can Support Right Now
By Syeda Khaula Saad and JR Thorpe
6 Spring 2023 Haircut Trends That Will Make You Contemplate A Chop
By Olivia Rose Rushing
Get Even More From Bustle — Sign Up For The Newsletter
From hair trends to relationship advice, our daily newsletter has everything you need to sound like a person who’s on TikTok, even if you aren’t.