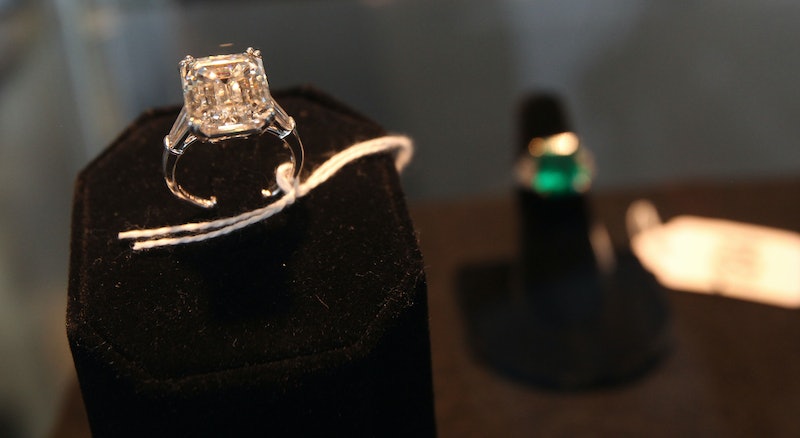 Back in my commuting days I would play a game on the subway called "Engaged or Not?" The (probably very self-explanatory) rules were such: 1) Identify a woman, 2) Look for an engagement ring, 3) Note existence or absence of said ring. I didn't even keep count, but I did learn something — every betrothed woman in New York seems to have the same diamond-so-big-it-could-blind-you engagement ring. I also realized that, though I had been conditioned to want such a ring for myself, I just didn't. The giant clear gemstone isn't very me.

Men and women are raised on a steady diet of "A Diamond is Forever" advertising that leads us to believe the only way to show true love is with a giant princess cut solitaire. But I'm not buying it, and neither is Vogue, which published an article called "Put a Ring On It — Just Not a Diamond One," in which author Lizzie Garrett Mettler examines the conventional engagement ring style and why many women are opting out these days. Mettler writes of her own diamond ring:

I was 25 when my husband proposed to me on bended knee. At the onset, I enjoyed the traditions of marriage—the formalities, the save-the-dates, and the diamond engagement ring. It was all so grown-up. But as we spread the good news, all eyes seemed to go directly to my knuckle. How many karats? What kind of cut is it? How is it set? Where did he get it? The questions made me queasy. Was it average? Too big? Too small? And more to the point: Had everyone who had ever gotten married secretly taken a course in gemology?

The scrutiny, cost, and constant assessment of status is one thing that turns many off from the diamond. For me, the stone simply doesn't fit my sense of personal style. If I'm going to be wearing a ring constantly, a ring that is supposed to symbolize my lifelong commitment to another person, I want that ring to scream "Erin!" not "Conforming to societal conventions!"

Want to break the rules when it comes to engagement rings? Check out this list of seven alternatives to the boring 'ole diamond.

Just because you're participating in the institution of marriage doesn't mean you aren't a rebel.

The married world is your oyster.

Diamonds can still be a girl's best friend, but if you're more low-key go the pave route.

Any hippie bride-to-be worth her salt knows that raw stones have some powerful energy (plus, they're just plain cool).

This earthy engagement ring has a soft, organic shape reminiscent of entwined branches.

Inject a dose of color with this square turquoise stone set in gold.

The delicate band of this bright ring features an arrow print.