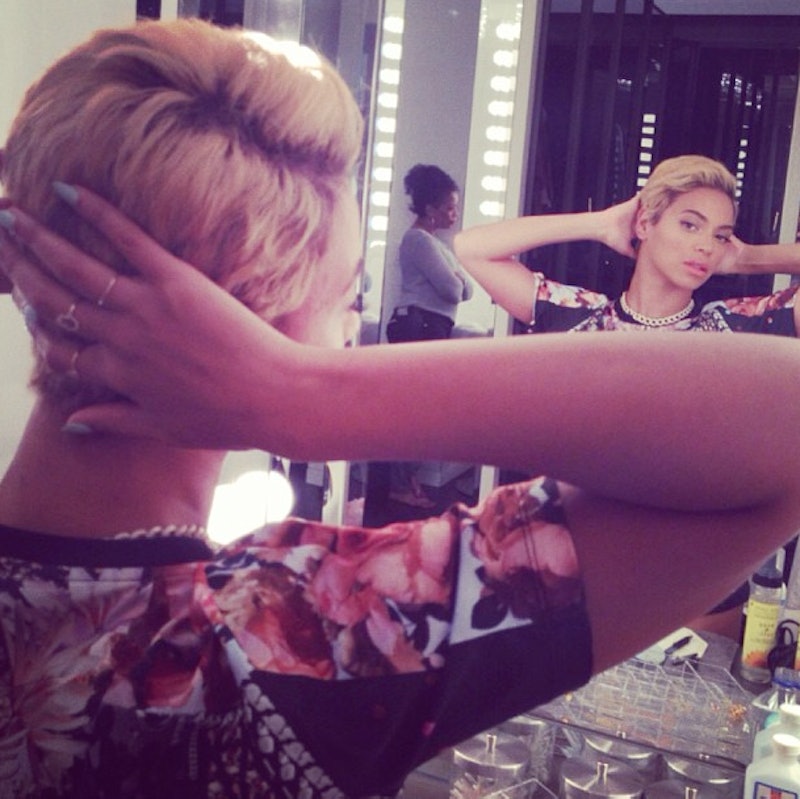 Hey, have you heard? Beyoncé got a pixie cut. Maybe you've seen it literally everywhere. On principal alone, I refuse to say "Beyoncé has the best pixie cut of all time," because, hi, have you seen photos of Mia Farrow back in the day. But I'll merit Beyoncé with a silver medal for pixie cuts.

Now that Beyoncé has gone and shown that, yes, short hair can be just as — if not more — fabulous, and sexy, and badass as long hair, you can expect plenty of women to head to their salons. However, just because Beyoncé does something doesn't mean you can. I mean, Beyoncé posts selfies all the time on Instagram, and that would be really annoying behavior from someone else.

About two and a half years ago, I got a pixie, and I loved it... for about three months. Here are the questions I wish I had asked myself before I made the big cut:

2. Do you have time to style your hair every morning? "What?" you ask. "Doesn't short hair decrease style time?" Although it's true that, yes, short hair is generally more low maintenance, you can't ever just throw it in a messy bun or ponytail, since, uh, it's not long enough to do so. If you're someone who relies on those simply styles, then you might not want to commit to the 15 or so minutes that it will take to style your pixie each morning.

3. Do you want to deal with products? Waxes and pomades add texture and shine to pixies, but it can be frustrating to find the perfect product.

4. Do you have time to deal with the upkeep? In order to keep your pixie looking fresh, you've gotta head to the salon every few weeks. Some salons will trim your pixie for about $20, but it's still pretty annoying to have an extra number on your to-do list.

5. Are you ready for the awful stage of growing out your hair? OK, so, the most frustrating thing about having a pixie isn't actually having a pixie. It's the aftermath, when you've decided fairy hair is no longer for you, and you have to slog through the dreaded period of growing out your hair. Let's just say there's a reason you can't find any photos of me from spring of 2012.

So, you've answered all these questions, but I do want to say one last thing: Pixie cuts are great, even when they're not. By that, I mean that there's something distinctly empowering about cutting all your hair off, even if you regret it a few months (or weeks) later. At the end of the day, it's just hair, and if you're just dying to unleash your inner Beyoncé, then I say take out the scissors.