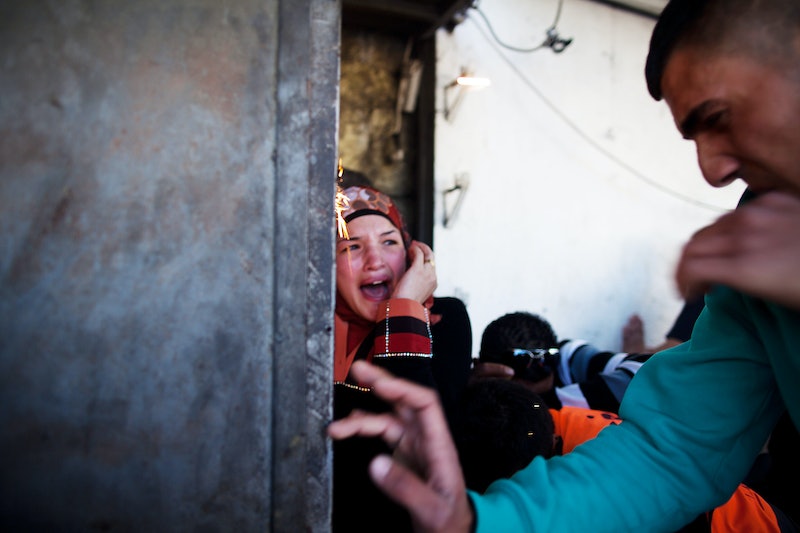 On Thursday morning, the UN reported that the death toll from the conflict in Syria has approached 93,0000 people—just about the same number of people who live in Flint, Michigan. That evening, the U.S. confirmed it now believes Syria used chemical weapons against its own people. Now, The United States has announced it will provide military support and weapons (though not so far its own troops) to support rebels in the country.

In the U.S., we know that there's a civil war pitting the Government of Basshar al-Assad against the Free Syrian Army. We know we're now involved. But what we don't hear in the casual churning of headlines and English-language newsflashes? The voices of the Syrians affected.

That said, when you really look for it, you can find some remarkable reporting. Here's a round-up of five perspective-deepening, conversation-opening windows to help you better understand the conflict in Syria:

1. Crowd-sourcing projects collect what we do know.

We know Syrians face a massive rape crisis, but we don’t know how massive. A Women’s Media Center report gets context from Erin Gallagher, a former investigator of sexual and gender-based violence for the UN's Commission of Inquiry on Syria. Gallagher says the scope of sexualized violence is huge, but that “there are more victims out there than what we are finding," and getting a true idea of the scope will "take time, trust building, and a broader, holistic approach.”

In the meantime, graphic designers do what statisticians can't. NPR's Deborah Amos reports that crowd-sourcing is becoming researchers' go-to strategy for breaking down some of these massive numbers. Using tips from Facebook, Twitter and YouTube, public health researchers at Columbia University analyze data and add it to a crowdmap. Rape incidents are represented by dots on a map — the bigger the dot, the more reports from that particular region.

On a broader scale, there's also Syria Tracker, which uses color-coded dots to illustrate everything from disease to revenge killings.

“This focus on one dimension of a much broader issue has the effect of obscuring and overshadowing critical concerns for women living through conflict, including Syria. Human Rights Watch has documented multiple abuses affecting women in war, including forced displacement; the targeting and punishment of women because of their own activism or activism by male relatives; the drive towards earlier, forced and child marriages because of instability and a lack of security for girls and younger women; an increase in domestic violence and sexual violence committed by civilians; lack of access to food, shelter and health care; the interruption of education; and sexual exploitation and trafficking, to name but a few. The increasingly narrow focus on sexual violence means that resources are not being mobilized and deployed to address the full range of violations against women's rights.”

See: This photo essay at The Atlantic. Or, listen to this account from Independent radio reporter Marine Olevesi, who writes from the embattled town of Deir Ezzor:

"School’s open a few hours in the afternoon, falafel vendors sell hundreds of deep fried balls every day and people still get married. I get invited to a wedding party. It’s for women only. There are about 50 of them. The younger ones let their hair down and belly dance.

The bride glitters with sparkling powder. She’s getting married to a fighter from Jabhat al-Nusra, the Islamic brigade affiliated with al-Qaeda. Her friend says he could well die tomorrow, but the choice is between this or living like they’re dead already. So tonight, they all put on make up and tight dresses. But the anger stirs right under.

“All the world sees what’s happening here, but they don’t speak,” she says. “Everyone, everyone see what’s happened here, everyone, but close their eyes.”

4. Though refugees keep flowing out.

Despite the terrible conditions, the first months of 2013 saw a sharp upsurge in refugees. At last check, the UN's agency for refugees estimated that more than 1.6 million people have fled Syria, "placing unprecedented strain on communities, infrastructure and services in host countries." Most found camps in bordering Lebanon, Jordan, and Turkey, but for those of us in America, this crisis may soon literally come a little closer to home: the US is considering resettling limited numbers of Syrians in order to ease conditions.

5. Syrians continue to tell their own stories.

First, read an introduction to the Syria Untold project at GlobalVoicesOnline.org, and then check out the project here (I especially like the interactive timeline on the bottom). If you happen to speak Arabic, they're looking for translators who can help.

Have you read anything particularly insightful, thought-provoking, or perspective-changing on Syria recently? Tweet at us! I'll keep the list going with your suggestions.