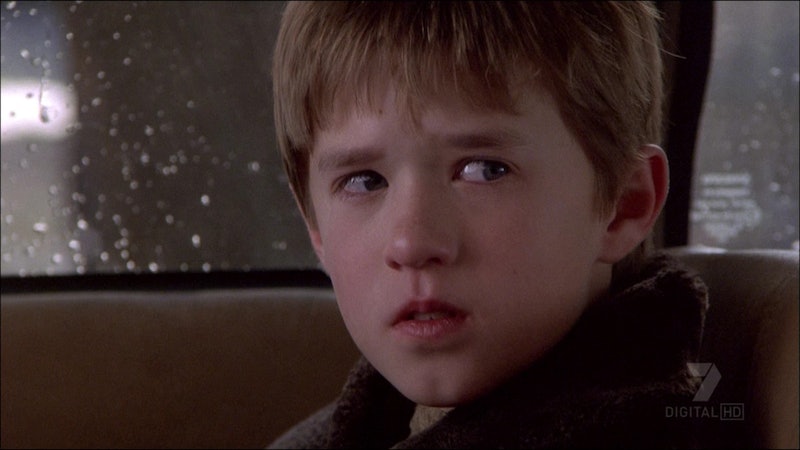 When I was a kid, I begged my babysitter to let me in on the supposed twist ending of The Sixth Sense, the scary movie that all the cool kids had already seen in my third-grade class. You might have thought that this would have ruined the movie for me, but somehow I carried on, and The Sixth Sense became one of my absolute favorite movies. I may have known the ending from the start (totally my fault, by the way — I think my babysitter would have said anything for me to go to sleep at that point) but maybe that was a good thing. I've rewatched The Sixth Sense approximately a thousand times in the past 15 years (Wednesday marks the film's 15th anniversary), and I've realized that there were a lot of clues that revealed the truth before that final scene. I guess the late '90s were a simpler time ... and hindsight is 20/20.

I think that The Sixth Sense has permeated our culture enough so that even people who haven't seen the film know the ending, but just in case you're one of those spoiler-free purists, consider this your official, totally unnecessary SPOILER ALERT. The film tells the story of Cole (Haley Joel Osment), a boy whose secret ability to communicate with the dead has led to social alienation and depression, and the psychiatrist, Dr. Malcolm Crowe (Bruce Willis) who helps him deal with his gift. As Cole realizes that he can help the ghosts he was once afraid of, his psychiatrist realizes that maybe he isn't there to help Cole after all — in fact, maybe it's the other way around. (Wink, wink.) That's the big twist: Malcolm has been dead the entire time and had absolutely no idea.

Sure, OK, Malcolm had no idea ... but maybe we should have. These clues were in the movie the whole time, and it's a true testament to M. Night Shyamalan that we overlooked them. Here were the things that should have tipped us off about Malcolm's fate.

At the very beginning of The Sixth Sense, Malcolm is shot by New Kids On the Block member Donnie Wahlberg, a former patient of Malcolm's who is mad that Malcolm couldn't help him. Malcolm lies on the bed with blood pouring out of his stomach, his wife Anna screaming for help ... and then the scene cuts to the next year. We assume that Malcolm survived the gunshot, but why is Anna ignoring him? Not just being passive aggressive or cold, but flat out acting like he doesn't exist. If I were Malcolm, I wouldn't try to win back Anna's affection — I'd be pissed that my wife doesn't seem very distressed by the fact that I was almost murdered in front of her. The only logical answer — well, logical-ish answer — is that Anna has no idea that Malcolm is really there. I mean, it's either that or she's a really, really bad person.

Malcolm Never Interacts With Cole's Mother, Despite Being His Psychiatrist

Anna's biggest issue with Malcolm was that he was a workaholic, which, to be honest, she didn't seem to mind all that much at the beginning of the movie. A year later, Malcolm's workload has slowed down considerably (because he's dead) but he tells Cole that his wife is resentful of his career. But, uh, what career is that, Malcolm? Palling around with your one client a few days a week doesn't seem like the kind of thing that would make your once-supportive wife freeze you out completely for a year. This is the kind of situation that, when you're watching the film, seems to make sense — how many movies have we seen where the wife or husband is resentful of a spouse's career? It's only when you look closer that you realize how many holes there are in Malcolm's explanation for his marital problems.

Malcolm Doesn't Move Things In Front Of Other People

Malcolm never touches or moves objects in front of anyone other than Cole. One example is during Malcolm's "anniversary date" with his wife. Malcolm walks into the restaurant, late, and sees Anna with the check. When he goes to grab the check, Anna grabs it away from him before he can touch it. Malcolm sees this as her being angry that he is late for dinner, when, in reality, Anna has gone to the restaurant to commemorate their anniversary alone. In the same scene you can see that Malcolm never pulls out his own chair, and slides into the table without ever moving anything in the scene.

Malcolm Is Never Questioned By Strangers

There are only three people we see Malcolm directly interact with in the entire movie: Vincent, Anna, and Cole. Malcolm talks to no one else throughout the movie, despite the fact that he often shows up in places that he shouldn't be. Malcolm shows up at Cole's play and isn't questioned by Cole's teachers or friends. Malcolm shows up at the funeral of a stranger and no one thinks to thank him for coming. Had Malcolm been alive, people would probably start to wonder who this guy spending all his time with a 10-year-old is. The only reason they don't is because it's like he's not even there.

Cole's "I See Dead People" Speech Has A Huge Clue

When Cole lands in the hospital, he finally tells Malcolm the truth — he can see dead people. Here's what he says:

I see dead people... Walking around like regular people. They don't see each other. They only see what they want to see. They don't know they're dead... They're everywhere.

Check out the lines "they only see what they want to see" and "they don't know they're dead." Ring a bell? It should: That's a description of Malcolm Crowe. Not only does he have no idea that he's actually a ghost, but he doesn't realize that the little "odd" things in his life (his struggles with a door knob, his lack of communication with his wife) can all be explained by the fact that he's dead. He doesn't notice this because he only sees what he wants to see. In fact, if you watch the scene, the camera lingers on Malcolm's face for a considerable amount of time, even as Cole is talking. It's almost as if Malcolm recognizes that Cole could be talking about him, but chooses to deny it. Check it out below.