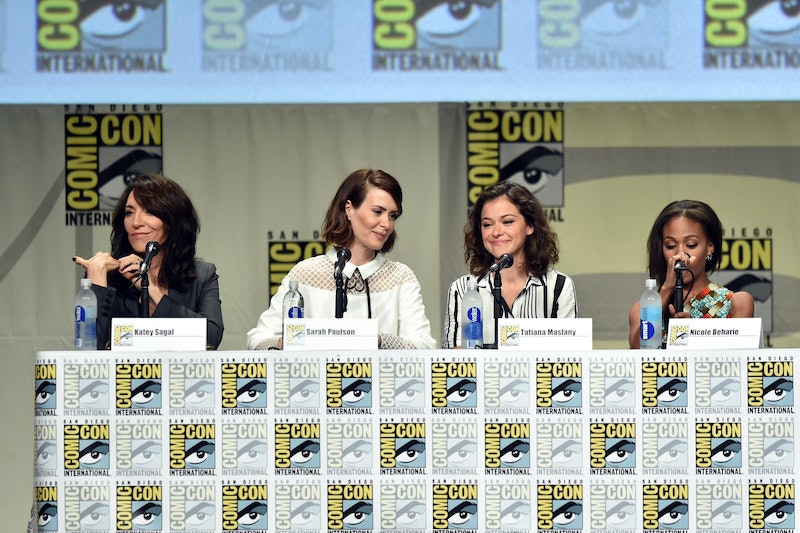 Now that San Diego Comic-Con has said its annual farewell, it's time for those unable or unwilling to shell out the big bucks required to actually go to the Con to sit back, and let the things we missed come to us for free via the Internet. To that end, we get to witness Comic-Con's Women Who Kick Ass panel for ourselves. Ah, the glories of the modern age.

The panel, which featured Sleepy Hollow's Nicole Beharie, Orphan Black's Tatiana Maslany, American Horror Story's Sarah Paulson, Sons Of Anarchy's Katey Sagal, and Game Of Thrones' Natalie Dormer and Maisie Williams, has already been making the rounds in the Comic-Con press fever. The basic gist of the coverage so far seems to be, "These ladies said some awesome things," followed by memorable, funny, poignant quotes about women in the media. Like this one, from Dormer:

I don't think that it's healthy for young girls to be looking at these beauty magazines and watching TV and these shows and thinking [that's the standard] ... there's more European attitude — you look at French film, Spanish film, they're a little more open to quirks and human nature. That we're not all symmetrical, not all the same shape... we need more of that.

And from Beharie, about the power inherent in being a woman headlining a show:

A lot of different men will come on as day players or guest parts, and I recognize that there's a certain strength that I have now, or a certain command that I have being one of the leads on the show that I hadn't had before…. Just owning that space and not being expected, as a woman, to shrink, or curtsy, or any of those sort of things.

And it's been great — but it's been sparse. But now it is sparse no more! Now we've got the full hour. You can watch it below:

It should also be noted that perhaps my favorite thing about this panel comes simply from its scheduling. It took place in Hall H between the DC and Marvel presentations, which meant that no one could leave for fear of losing their seats. As this Twitter user laid out: