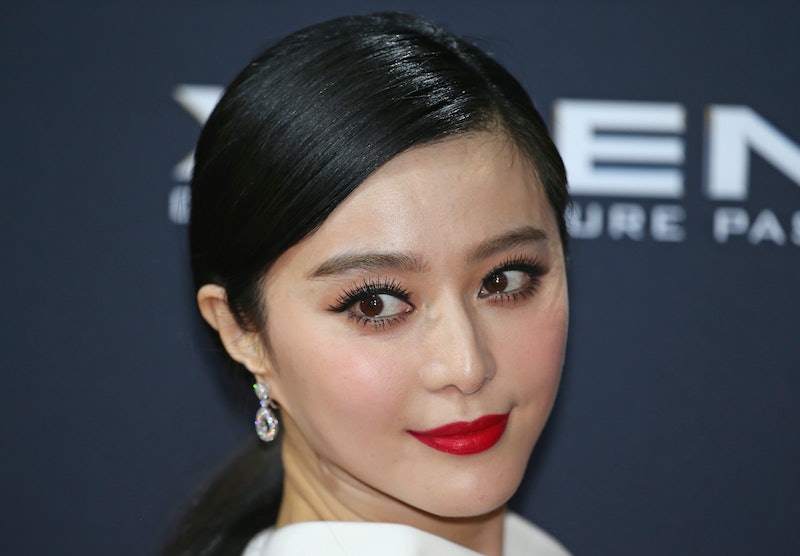 A precursory Google search informed me that The White Haired Witch of the Lunar Kingdom is pretty much exactly what it sounds like. It's a wuxia-fantasy film ("wuxia" means it stars a martial hero, like the ever-popular Crouching Tiger, Hidden Dragon), starring Fan as the titular "white haired witch," and according to The Hollywood Reporter, it also features a "Romeo-and-Juliet-style romance." Martial arts, fantasy, Fan Bingbing in an awesome wig, and forbidden love? Sounds like a win-win-win-win to me!

Anyway. Just thought I'd share — I don't know about you, but with a title like that, I had to investigate further. But what we're really here to talk about today, is Ms. Fan's ah-mazing red carpet ensembles. We most recently saw her completely killing it on the X-Men: Days of Future Past press tour: she dressed very on-topic, with a Catwoman-esque Zac Posen number, and a supremely dramatic (and superhero-worthy) black feather-caped Georges Chakra white column dress.

But now, she's moved on to promote her awesomely-titled new film, and her outfits have been correspondingly fabulous. I'm hoping we'll see even more red carpet ensembles from her before the press tour is over, but here are her best looks so far:

That bunny, paired with the claw-like manicured nails is the epitome of creepy-cute (also, how is her face so perfect??). And if you like her blouse, check out her skirt:

More bunnies! Who would ever have guessed that matching rabbit separates could look so chic? I think it's Fan's red carpet wizardry (or rather, witchery — har-har) at work.

Christopher Bu seems to be one of her favorite designers; she wore two of his more dramatic looks to Cannes to great effect, but this more laid-back number is just as gorgeous. The color? Perfect. The print? Perfect. Her shoes? Perfect. Her coral handbag? Perfect. And don't even get me started on her hair and makeup, because I will wax poetic.

She wore a sister dress to Emma Stone's recent Magic in the Moonlight red carpet victory. Personally, I preferred Emma's purple take on the look, but Fan looks amazing in this empire-waisted canary yellow version. Besides, can you ever really go wrong with owls and squirrels? (Please don't answer that).