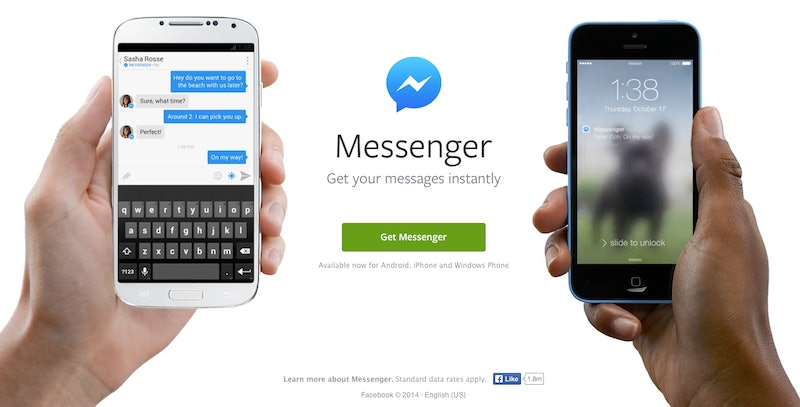 Because nothing good on Facebook can stay, the social media platform is getting yet another upgrade. But this time, it won't be to your profile page, so your timeline design is safe (for now). After a test-run in Europe, Facebook is rolling out a separate, downloadable Messenger app, so say goodbye to those circular pop-up faces that you and your iPhone have grown to love — in a week, they'll be gone. Poof.

Here's the deal: You can currently message your friends and acquaintances on Facebook through the simple Facebook app, but after the roll-out, messaging through the regular app will no longer be an option. Instead, you'll have to download a separate Facebook Messenger app for your iPhone, Android or Windows Phone. Essentially, you'll now have two Facebook apps clogging up your phone instead of one.

Why is Facebook taking this unnecessary step into stand-alone phone messaging? According to CNET, it's all part of Mark Zuckerberg's plan for app domination. Zuckerberg reportedly told the website via a conference call in January that he's looking to "build a handful of different experiences that people don't think of as Facebook."

But going by that vision, what's strange about making Facebook Messenger a stand-alone app is that it is Facebook. Even back in the social media platform's early, simpler days, private messaging with Facebook friends was an option. A Messenger with Facebook is just ... text messaging — something iPhones and Androids already have.

However, Zuckerberg seems to think Messenger has the cache to be its own individual app. "It gets room to breathe and blossom," he told CNET in January.

OK, so what are some of the pros to Messenger? For starters, Facebook says the app is totally free, unlike most text messaging. "It's just like texting, but you don't have to pay for every message," the iTunes description says, adding that the app works with your data plan.

Another bonus for the Messenger app is that it's allegedly 20 percent faster at sending text and photo messages than the Messenger tool in the Facebook app, according to TechCrunch. Of course, the biggest pro Messenger seems to be hinging on is the fact that users don't have to open the Facebook app to send a message. No more wasting your time scrolling through your endless newsfeed — just send your super-urgent text and go.

And there's also these cute stickers that have little-to-no purpose besides being adorable.

Despite being a bit faster and having a single purpose, is a separate Messenger app truly necessary? Sure, you now have a more direct messaging system, but you'll also have to continuously bounce between Facebook and Messenger. It's neater — and more efficient — to keep all your Facebook-ing in one compact app than to split it up into fragments. What's next: an independent app for organizing and sharing your Facebook photo albums? Considering that Facebook bought Instagram in 2012, that's not too far out of the realm of possibility. ...

Overall, forcing Facebook users to download Messenger seems like a shameless way to promote the platform and increase its popularity. "Messenger is used by more than 200 million people every month, and we’ll keep working to make it an even more engaging way to connect with people," Facebook said in a released statement to TechCrunch. That number — 200 million — is quite a lot, but is only a fraction of the total Facebook mobile users. As of April, more than 1 billion people had Facebook mobile; soon, all of them just might be on Messenger.

More like this
Ashamed Of Your Screen Time Stats? Here's How To Change That
By Alexis Morillo
How To Turn Off TikTok Profile Views So You Can Stalk Other Accounts In Secret
By Alexis Morillo
This Wordle Rival Is Taking Social Media By Storm
By Sam Ramsden
Twitter Has *A Lot* To Say About The "Single Penalty”
By Sam Ramsden
Get Even More From Bustle — Sign Up For The Newsletter
From hair trends to relationship advice, our daily newsletter has everything you need to sound like a person who’s on TikTok, even if you aren’t.