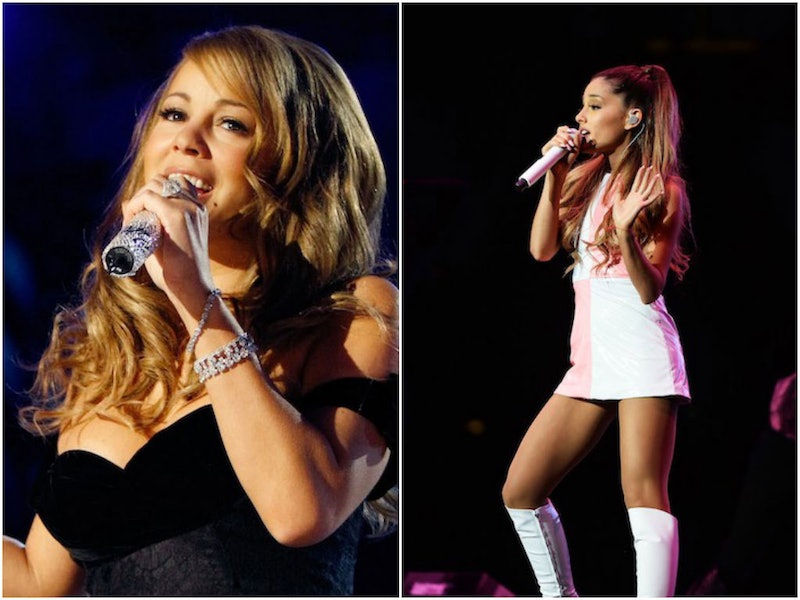 I was busy blogging when I first heard Ariana Grande’s “The Way” on the radio, and like many of you, I'm sure, I mistook the ethereal singing and R&B vibe for none other than Mariah Carey. Because who else can successfully get away with that strange vocal whistle in a pop song? Obviously, I’m not the only one who's been tricked because Ariana Grande’s been lauded as “Mini Mariah” or “the new Mariah” — both of which are incorrect as Carey is still the only Mariah as far as I’m concerned. Of course Mimi had something to say about the young ingénue who is apparently herself reincarnated: "First of all, I’m still young because I discount numbers. Numerically speaking, I stopped counting at 17."

PopCrush reports that when the diva spoke to The Breakfast Club radio show, she was careful to avoid voicing her displeasure at the comparison, but still wished the best of luck to Grande. One of the radio hosts pointed out how Jay Z gets offended when he’s compared to other artists and Carey suavely replied that "Jay said a lot of things I agree with." Not exactly the warmest of welcomes from an industry vet, but hey, at least Grande takes the comparison as a compliment. She has cited Carey as one of her biggest influences, after all.

It's hard to deny that Grande and Carey are very similar ladies. So similar, actually, that I drew up a little game I like to call “Ariana or Mariah?” Think of it as akin to MTV's old claymation show Celebrity Death Match — the 90’s way of posing comparable artists like Britney Spears and Christina Aguilera, or the Backstreet Boys and N’SYNC against one another. Actually... don’t think of it that way, because I lack the resources to run my own show and the sculpting abilities to capture Grande and Carey’s likenesses in clay. Instead, I’ll just ask questions.

That would be Carey. Grande has a four octave vocal range which is still extremely impressive. They both have the diva finger wave down at least.

Who is most likely to have a pretty hair bow in her hair?

I tricked you with that gif, because it's not Carey. It's Grande. Her long, luscious ponytail is as much part of her identity as good lighting and constant dramatic wind is part of Carey’s. During her guest spot on Ally McBeal, Mimi even poked fun at it.

Who had her first hit single at age 20?

Who has a Christmas album?

Both ladies again! Carey's holiday album Merry Christmas is the best selling Christmas album of all time, and "All I Want for Christmas Is You" earned its place in Christmas song canon. Grande even covered the song in a very Mariah Carey-like fashion for a Christmas tree lighting in Los Angeles, but she didn't have it on her Christmas EP Christmas Kisses. She did include her cover "Santa Baby" though.

Who has been on TRL?

Trick question again. You really can't trust this game. Both ladies have been on TRL. This year Grande brought back a version of our favorite music video countdown seven years after its cancellation with "Total Ariana Live." And of course, we can't forget Carey's visit to the studio where she surprised host Carson Daly and the entire crowd by wheeling in a hand truck of ice cream.

Who has a song called "Always Be My Baby?"

That would be Carey. Were you confused because Grande's been giving everyone a teaser of her upcoming single "Be My Baby?" Grande doesn't really have a time limit on how long she wants you to be her baby.

That's Carey. This was a toughy, because Grande did suffer vocal hemorrhage at the end of last year, so we knew something was wrong. But lucky for Grande, she's rested and back. Carey's always been open about her vocal nodules, which she attributes to how she can still reach a "huskier" level along with her wide range.

Either way, both ladies can successfully get through Carey's "Emotions" without passing out which, to my karaoke dreams, is a feat. Seriously, give a listen and just be amazed at that super-high vocal whistle they can do.