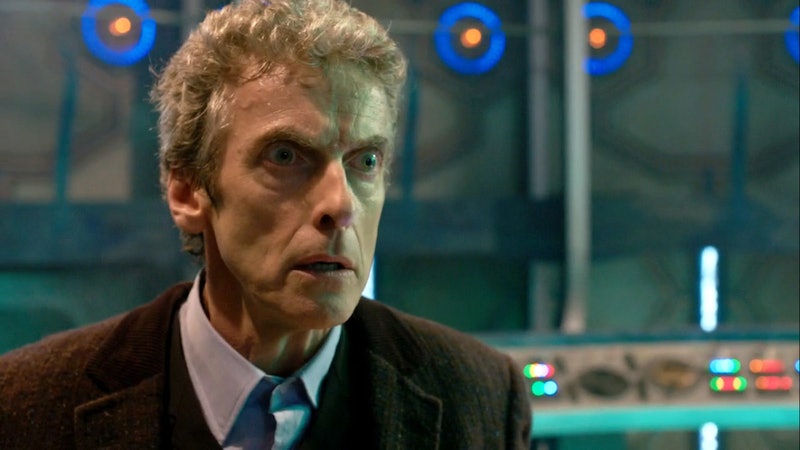 The flirting thing's arguably the biggest change — Eleven had a flirtation with companion Clara (Jenna Coleman), and shared kisses with both her and previous companion Amy (Karen Gillan). In fact, New Who's Doctors have had flirtations (or at the very least unrequited love) with every companion aside from the (non-John Barrowman) male ones and Catherine Tate's Donna Noble. But Capaldi's Doctor, the oldest of the bunch, is having none of that. As Capaldi told Sunday Times Magazine (emphasis mine, to point out Capaldi is boss now):

There'll be no flirting, that's for sure. It's not what this Doctor's concerned with. It's quite a fun relationship, but no, I did call and say, 'I want no Papa-Nicole moments'. I think there was a bit of tension with that at first, but I was absolutely adamant.

I can so easily picture that phone call. Capaldi calls Moffat after dinner, "So, Steven, I've been thinking, and I really just have to say a flat-out-fucking-no to any sexy stuff between Clara and the Doctor this season." A sharp intake of breath on the other end of the line. "But!" Moffat says, fists clenched. "The kissing! The girls have to have the kissing!"

I've got a feeling the Doctor Who crowd will breathe a huge sigh of relief over not having to witness more companions throwing themselves at the Doctor at every opportunity. We've seen enough of that for plenty of lifetimes.

The sexy stuff isn't the only place Capaldi's putting his foot down, either — more evidence of his opinions winning the day over in Who land are evident in Moffat's description of Capaldi's costume to SFX (emphasis min, to prove Capaldi is boss, part two):

He wanted to be quite stark. Stark and skinny. A stick-insect sort of thing. Clara actually calls him a grey-haired stick-insect at one point. We had some hilarious pictures of Peter just dressing up. It was all coming from him because he’s really into his clothes. I didn’t feel qualified to go and chat too much about it. Certainly the costume didn’t go anywhere until I shut up. The thing I’ve learned about showrunning is you need to know the bits you’re bad at!