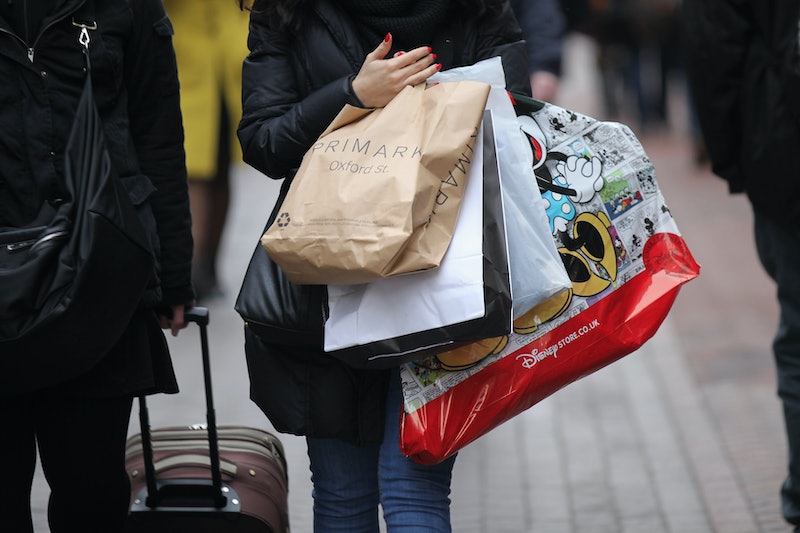 Generally speaking, fashion lovers are about as different as the varieties of clothing available in a store to begin with. Just search personal style blogs and you'll be challenged to find two bloggers whose style is exactly alike (although be ready to see a lot of midi rings and peonies). Fashion people are a vastly different, but still very alike group — the same as any cult, really. Did I say cult? Oops.

Of course, every fashion-loving gal is unique, but the one uniting factor is that we all are passionate about clothes. And accessories. And shoes. But some people just really don't get our fascination. Some people are passionate about other things, which I don't get. Long-distance running. Zumbathons. Mornings. Pitbull songs. Kale. Cliff diving — and tons of other things that I neither like, nor understand. And that's absolutely fine.

But, just as I imagine someone would probably get offended if I disregarded their Zumba habit as a waste of time and energy, there are certain things you just shouldn't say to someone who loves fashion. I've heard a lot of it and, yes, my feelings have been hurt. So if you have friends who love fashion and you really just don't get it, that's perfectly fine. Just don't say any of the statements below, please.

I should add that some people might genuinely mean (some of) these comments in a positive light, and, of course, things always get misunderstood in an age where most communication happens via social media. But to stay safe — maybe just avoid some of these specific not-compliments before you fling them at your fashion-y friends.

1. "Well, that's an interesting [item of clothing or accessory.]"

Would you tell someone that they look "interesting" today? No. You wouldn't. Because it's mean, and implies you have nothing positive to say about them other than that they look pretty darn weird. Killer whales, lions that nurse puppies, and the benefits of using coconut oil — those are all things that could be described as interesting. Whatever I'm wearing? Well, yeah, it might be interesting, but odds are it's also fabulous.

God forbid I want to wear a nice structured midi skirt and bedazzled top while I mindlessly scan the Internet and sip a latte at Starbucks. Sheesh. It's just clothing. If I am slightly formal, and you are not, I'm not about to comment on how underdressed you are. "Wow, aren't we looking casual today!" Of course not. I appreciate a good pair of sweat pants as much as the next gal. So just let me be inappropriately fancy in peace, please.

3. "I just don't understand people who spend money on that kind of thing."

This one usually goes something like this: "It's not that I think you're shallow or something, I just don't really understand it." There are a lot of things that I don't understand as well. For example, did you know that there are people who actually spend a lot of money on juice cleanses? I can't relate. But I realize that it makes people happy (and by happy I mean thinner, because really, let's be honest, those people want some doughnuts ASAP), so I say nothing. And while it may not be my wisest decision to spend $300 on trendy headphones, they make me happy. So that should be enough.

Now, this can really be anything. But I can tell you that it's not going to be, "You really remind me of Blake Lively right now." It's more likely to be something not entirely negative, but certainly not positive either. This kind of comment always reminds me of the time when I wore a pair of gladiator sandals to my local mall. Also, I would like to add that this was 2008/2009 and I was clearly ahead of the trend curve. Anyway, as I walked proudly into the food court, a random guy shouted "300!" at me. As in the movie. With gladiators. My friends found it funny. I, however, did not.

These are also the girls who make you feel uncomfortable because you don't know the exact rules of professional football (and, by the way, it is possible and OK to like both shopping and sports ... or one and not the other ... or neither). A good rule of thumb here is that if someone likes doing something that you don't — hey, it's not a big deal. I am scared of tanning beds and most weight-lifting equipment. Do I fault people who enjoy those things or passionately talk how much I hate it? No. I just simply don't lift weights or tan. And it works out just fine. Except for the whole noodle-arm thing. But I'm working on it.

This one is a tricky one, and the most confident of fashionistas probably would not be fazed by such a comment. But, let's be honest here, it is something girls say to other girls when they don't know what else to say. A backhanded not-compliment, if you will. It's one of those things we say to someone else while telling ourselves, "Well, I feel OK because I didn't lie to her, exactly." We all know what you're really saying is that you would not get caught dead wearing whatever it is the other person is wearing. And it's a little awkward sometimes. And, also, any girl can pull any outfit off if she wants to.

This one is a little more specific to me, since I'm just shy of 6 feet tall, but still. They're heels. They add ... height. Deliberately. What did you think was going to happen when I put them on my feet? I was going to magically remain the same. No. That's the point of them. Please excuse me while I withhold my comments to marvel at how short you (still) are in your heels.

8. "I would just never think to combine things like you do."

Read: I would never combine things like you do because I do not wish to look as completely, 100 percent cray cray as you do right now with your pattern mixing.

9. "I could never be that obsessed with Instagram; it's just so pointless."

Instagram: a fashion lover's crack. There's really nothing else to add here. Some are more obsessed than others, but for the most part, those who love fashion love Instagram almost as much. And for those who judge our social media addiction, well, it's better than actual crack. So there's that at least.