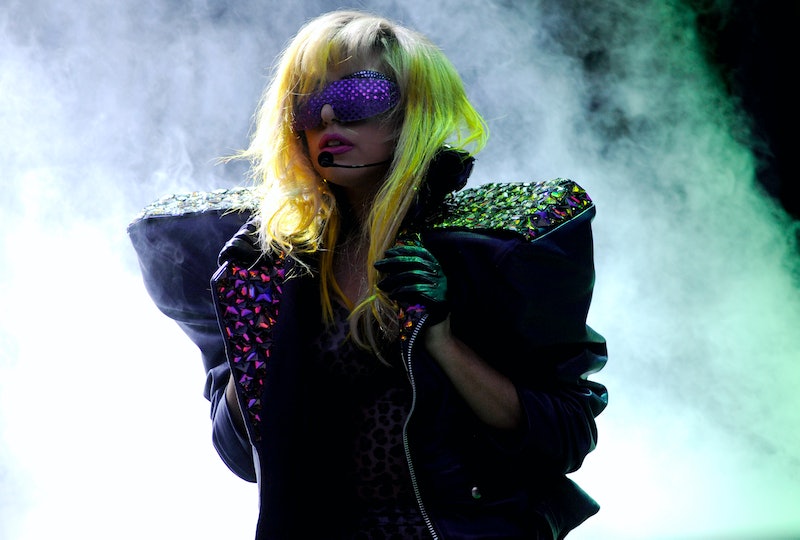 Shoulder pads: You either love them or you hate them, right? JUST KIDDING, OF COURSE YOU HATE THEM. Who likes shoulder pads? Oh, you're "kind of into them"? Geez, I'm sorry… I just thought we were all sort of on the same page here.

Sure, the shoulder pad is one of those items that's intended to convey all the right things: Power! Capability! Confidence! Unfortunately, in real life, the shoulder pad often looks like all the wrong things: Clunky. Unflattering. Totally '80s. But no matter how many awful fashion mistakes have been made with shoulder pads in a starring role, there's one thing they have going for them. Believe it or not, shoulder pads have something of a feminist history — in that they've always been used to help women keep up with the guys.

Technically, shoulder pads were invented in 1877 by a Princeton football player named L.P. Smock. But shoulder pads for sports are so different than shoulder pads for fashion — unless you're wearing that jacket with the padding to protect yourself from injury? — that's it's pointless to compare the two. The Fashion Shoulder Pad sprung to life, fully cushioned, in 1931, championed by designers Marcel Rochas and Elsa Schiaparelli. A year later, when Joan Crawford wore a massively shoulder-centric dress in the movie Letty Lynton, the verdict was in: the shoulder was the new EVERYTHING.

As World War II came crashing through the annals of history, shoulder pads became more than just a fashionable look. They became a confidence-booster, a way for women to signify that they were leaving the home and going to work and doing it all for their country. Suddenly it was hipper than ever to dress courageously, defiantly, boldly, and what better way to signify boldness than the mannish silhouette of the shoulder pad?

After the war ended, the shoulder pad's time was up. People no longer wanted to dress the way they had during wartime, and Dior's "New Look" of 1947 celebrated all things anti-shoulder pad: slinky silhouettes, drapy fabrics, and sweeping skirts. "We were emerging from the period of war, of uniforms, of women-soldiers built like boxers," wrote Dior — referring, we can only assume, to the ubiquity of shoulder pads. His New Look was all about the ultra-feminine, and shoulder pads have always conjured up the man (just like "broad shoulders" is always compliment when referring to a man, but can be an insult when used to describe a woman).

Shoulder pads fell out of mainstream fashion for a couple of decades, and when they resurfaced, it was once again to help women assume — or overcome — the role of men. It wasn't pretty, but prettiness was the enemy. The '80s power suit, shoulder-padded within an inch of its life, was an embodiment of the "dress for success" mantra, and during the '80s, dressing for success meant dressing like one of the guys. And what better way to convey power and in-charge-ness then a silhouette with broad, strong shoulders?

Like women smashing through the glass ceiling, shoulder pads no longer felt confined to the suit, either. They leaped onto dresses, blouses, and casual jackets, making everyone in the '80s look a bit more broad-shouldered. No one was safe.

Post-'80s, shoulder pads fell back into oblivion in in favor of, uh, anything else. But you can't keep an odd-looking piece of shoulder jewelry down, and the trend is making a third comeback, of sorts, today. Stars like Lady Gaga, Kim Kardashian, and Victoria Beckham have all been adopting the powerful silhouette, and decorated shoulders — that's epaulettes, FYI — are also fairly popular these days as a sort of shoulder pad-lite look.

Why now? This time around, shoulder pads aren't designed to bring confidence in wartime or masculinity to the working girl. What do they bring, today, to the women who wear them? Hard to say exactly, but my money's on outer space. The shoulder pads of right now are studded, twinkling, and a little bit sci-fi. Until now, shoulder pads have been a weathervane of the times, embodying women's fears, aspirations, and futures. Maybe the first person on Mars will be a woman, and maybe shoulder pads are telling us that right now.

More like this
14 Of Hailey Bieber's Best Manicures
By Danielle Sinay
9 Celebrity Couples With Matching Tattoos
By Jordan Murray
'Stranger Things’ Natalia Dyer Has A Genius Hack For Taming Her Fringe
By Tomi Otekunrin
Yes, You Can Buy Off-White’s New Beauty Range In The UK
By Tomi Otekunrin
Get Even More From Bustle — Sign Up For The Newsletter