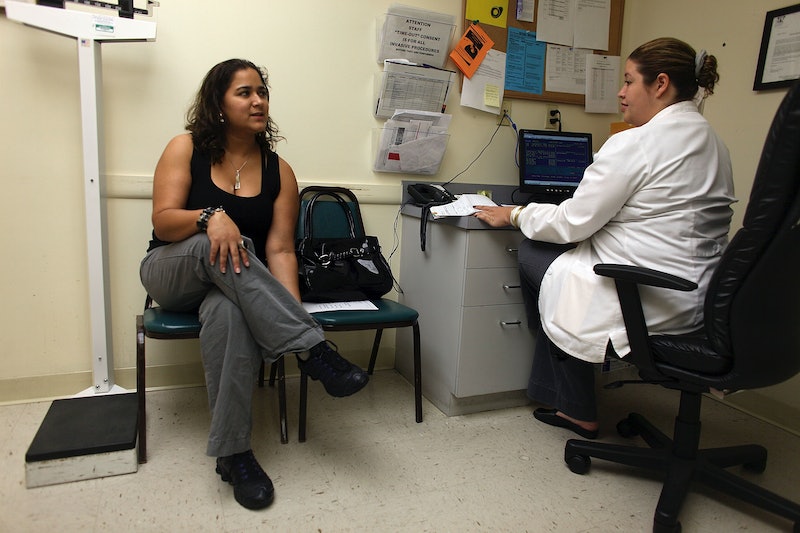 "HI sry gross/creepy question," began the Gchat I sent to approximately 20 friends earlier today. This is, in fact, how many of my Gchats begin; it signifies, pretty reliably, that whatever I say next will pertain at least indirectly to vaginas (sorry, friends). The v-centric topic du jour was gynecology — I'm due for my annual OB-GYN appointment, and while ZocDoc-ing cheerily about, the thought crossed my mind, "Man, it would be really cool if I were totally honest with my doctor this year."

Yeah, I know. In the words of an incredulous and evidently responsible pal, "Lying to your OB/GYN is baaad, Rebecca."

She's right, it is baaad. I mean, it's not like I saunter in and announce, "I'm a virgin! Are we done here?" But I have, historically, played it a little fast and loose with words like "never" (Have you ever smoked a cigarette?) and "always" (Do you use a condom every time you have sex?). Which, uh, actually, yeah. Now that I'm writing all this down for everyone and my mother to read, if so they choose, I am realizing that those are some pretty big lies. Shit.

About half of the people I chatted up — all women in their 20s, liberal enough to chill with a sex blogger, do with that what you will — admitted to lying to their gynecologists, while just shy of half said they were completely honest. A slight few admitted that they were way overdue for appointments.

This was not quite a Kinsey study or anything, but there were some across-the-board commonalities.

1. Everyone who admitted to lying to their gynecologist gave a dishonest response to one or both of these questions:

A) "How many sexual partners have you had in the past year?" My fibbing friends rounded way down in their responses; not one with a number in the double digits admitted to it.

B) "Do you use a condom every time you have sex?" Responses ranged from "Most of the time" to "Um, I try..." to a definitive, dishonest "Yes."

Not surprisingly, shame and aversion to a lecture seemed to be the motivating factors for not telling the truth. Regarding sexual partners, three friends added that they weren't sure why the exact figure was necessary — "Obviously, it's relevant if I've slept with a bunch of people as opposed to one or two, but why does the number matter?" One friend, on forsaking condoms occasionally, added, "If I've since learned I'm not pregnant, and I've been tested, then I don't see why they need to know, and I don't need a lecture."

2. Questions about sex weren't the only questions my friends lied about.

That "Cigarettes? Moi?!" thing I mentioned earlier is apparently not just a "me" thing. My friends who regularly smoke subtracted up to two packs off their monthly totals, whereas my friends who only drunk-smoke professed to smoke "rarely," when in fact, most of them smoke four times a month or more.

Across the board, participants also tended to downplay how much they drank by several drinks a week. Some only tallied the number of drinks they consumed during one or two nights of bingeing, while others only listed their after-work beer and acted like weekend partying did not exist. (FYI, lying to doctors about drinking and smoking isn't terribly rare — rather, it's common enough for WebMD to have addressed it, anyway.)

3. Not one of my friends who lied ever fibbed about a concerning symptom.

This, I thought, was good news. No one surveyed was willing to risk their health by ignoring or downplaying unusual symptoms.

4. Pretty much everyone surveyed seemed mildly to moderately terrified that their vaginas might be out to get them.

I forgot to ask a question that I think might have been important, and that is, does the doctor's gender make a difference? I've never had a male GYN, but I wonder if I'd be more inclined to be honest with a guy than with a woman. Or if I'd lie even more! A study published in The Journal of the American Osteopathic Association found that 66.6 percent of women had no gender preference for their gynecologists. Unlike 66.6 percent of women (I hope), I am obscenely suspicious that other women are judging me; perhaps I should book my next appointment with a male doctor.

I scoured the Internet to see how many women lie to their OB-GYN and couldn't find any relevant studies — but if it was a common practice among my friends, I (unscientifically) imagine it would be a common practice among the general twentysomething population. We're all smart here. We know why it's important to be honest with doctors (though this CNN article on five secrets you shouldn't keep from you GYN will remind you) So let's make a pact, my fellow scoundrels: let's be completely and totally honest at our next GYN appointment. Even if that means finding a new doctor, even if that means coming clean about past evasions (because major changes in your chart will probably raise a red flag or two).

One of my friends had a really great attitude that I would love for us all to emulate. It is THIS: "Hahahaha. No. I don't lie. I have nothing to lie about!"

None of us do. Let's start 'fessing up, people.

More like this
This Company Will Send STI Tests Right To Your Door
By Lexi Inks
I Visited Remedy Place, The Social Club Transforming The Wellness Industry
By Rachel Lapidos
Hailey Bieber Has A "Painful" Ovarian Cyst "The Size Of An Apple"
By Radhika Menon
The 8 Best Pilates Exercises For Lower Back Pain
By Carolyn Steber
Get Even More From Bustle — Sign Up For The Newsletter