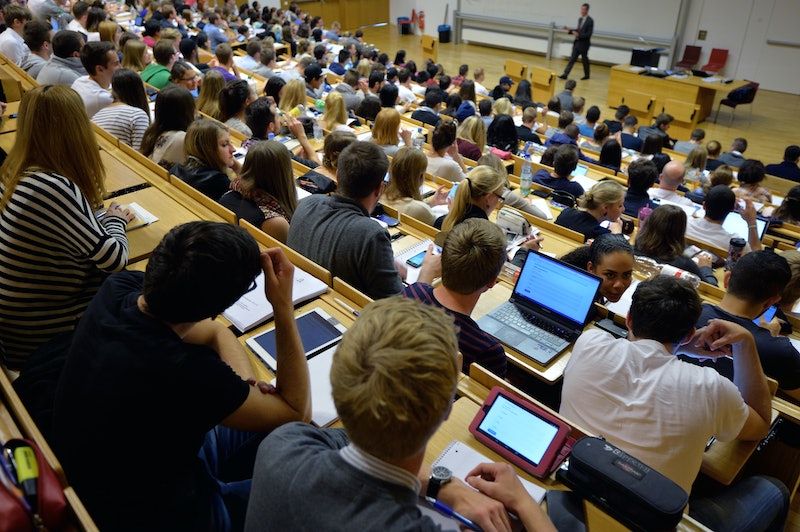 In social situations, Britishisms or a long Southern drawl can be charming and unique — how many times have you thought, "He's not that cute, but his Australian accent is"? Well, it doesn't seem to work the same way in the workplace. A Tennessee nuclear lab hired an accent neutralizer to eliminate employees' Southern accents, but the class was canceled after workers took offense. Who could have predicted that?

Oak Ridge National Laboratory, the U.S. Department of Energy's largest multiprogram science and energy lab, hired Lisa Scott, a speech pathologist based in Knoxville, to offer her "accent neutralization" services. According to Al.com, employees were notified that the class would cover "some of the most common pronunciation and grammatical differences between Southern dialects and standard American English." I'm guessing "y'all" would be on the list of parlance to eliminate.

According to Scott, accent reduction services are common at businesses, and are offered to employees from foreign countries and Americans with thick regional accents, such as New Yorkers, Bostonians, and Philadelphians. "Many people who live and work in a particular region may have no need or desire to change," Scott told NBC News. "But for people working with other people from other regions, they could benefit from having their accent neutralized."

The Southern workers did not take the suggestion so well, mostly because the speech lessons implied that there was something wrong with the way they spoke. Scott told NBC News that the notice for the six-week course "came across in such a way that some people interpreted it that their Southern accent was a problem."

The employees at Oak Ridge may not see their accent as a problem — high fives to them for being proud of their provenance — but in many industries, one's accent can play a crucial role in their career.

While it's common knowledge that racial discrimination during the hiring process is illegal, accent discrimination is more subtle and harder to prove. "A professional tries not to let an accent get in the way of hiring decisions," Victor Arias, co-managing partner of the diversity practice at executive search firm Heidrick & Struggles, told Monster.com. "But subtle emotions can come into play, and they may make a difference. Clearly, people make judgments based on accents."

These judgments likely stem from deep-seated cultural stereotypes that already influence our opinion on other ethnicities. According to Oscar DeShields Jr., a marketing professor at California State University, Northridge, who studies accents in the sales industry, certain accents can make one seem less competent. "People look at you as being stupid. It's one of those stereotypes," DeShields told NBC News. "If you can't get your ideas across ... it's of obvious repercussions."

And this discrimination doesn't just occur in the U.S. According to ITV.com, 28 percent of Brits feel discriminated against because of their regional accent, and research by the law firm Peninsular found that 80 percent of employers admit to discriminating against prospective employees based on their accents.

The Most Detrimental Accents

So if an accent can determine one's chances of being hired or how much time an employee spends with clients, and therefore how likely he is to move up in a company, which accents are halting careers?

Stigmatized accents from Boston, Philadelphia, and Maine are associated with being working-class, and individuals with thick accents can be seen as less educated and cultured. "I've heard a thick accent and thought, 'Boy, he hasn't left the neighborhood,'" Arias said. "And I've been completely wrong. I've had to slap myself."

But according to a study by Diane Markley and Patricia Cukor-Avila, both professors at the University of North Texas, who have studied how accents influence the hiring process, the New Jersey accent is the most offensive in terms of hiring.

Accents That Actually Help Your Chances

Just like some accents can hurt your chances of getting a job, some can actually boost your image. According to Markley, "It's all very situational."

"Not only may someone with a Hispanic accent be deemed 'less educated,' but someone with a British accent may be seen as 'more intelligent,' again with no basis," she told Monster.com. And certain accents, like Asian, can be more acceptable in certain industries, like tech or science, than others.