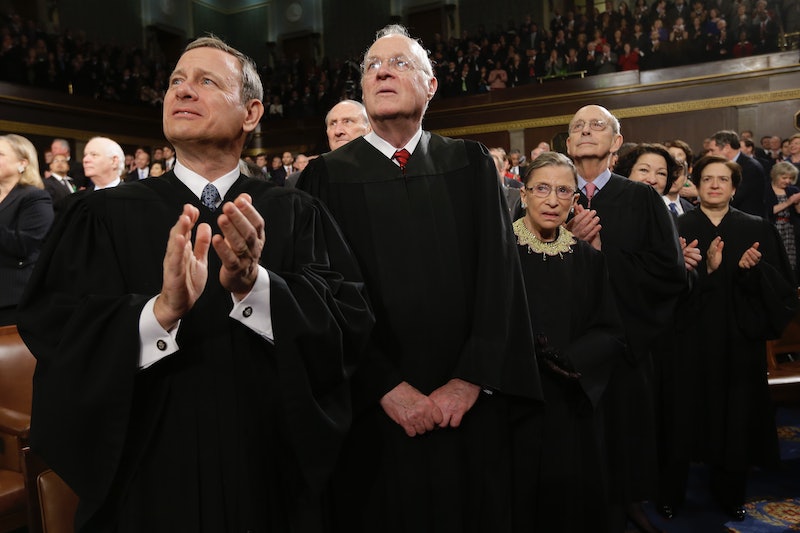 The Notorious RBG strikes again. Woman of the Year Ruth Bader Ginsburg criticized the male Supreme Court justices in an exclusive interview with Yahoo's Katie Couric, which aired Thursday. If you haven't already guessed, Ginsburg — she of "blistering" dissent fame — called out her male colleagues for not understanding a woman's need for birth control, or her right to affordably access it.

The conversation, of course, centered around the 5-4 Hobby Lobby ruling, which allowed employers to deny health care coverage of certain types of contraception for their employees because of their strongly held religious beliefs. The ruling applied the Religious Freedom Restoration Act of 1993 to corporations — an unprecedented legal move. The high court's three female justices — Ginsburg, Elena Kagan and Sonia Sotomayor — dissented, showing the stark contrast between how men and women view birth control. (Justice Stephen Breyer was the only male justice to oppose the majority ruling, joining the women of the court in the dissent.)

Ginsburg's passionate 35-page dissent quickly went viral, becoming a sort of rallying cry for American women. Couric circled back to her "blistering, scathing" dissent this week, asking the justice, "Why did you find this decision so disturbing?"

The decision that an employer could refuse to cover contraceptives meant that women would have to take care of that for themselves, or the men who cared. Contraceptive protection is something that every woman must have access to to control her own destiny. I certainly respect the belief of the Hobby Lobby owners. On the other hand, they have no constitutional right to hoist that belief on the hundreds and hundreds of women who work for them who don't share that belief. I have never seen the Free Exercise of Religion clause interpreted in such a way.

"It's the same kind of blind spot the majority had in Lily Ledbetter's case," Ginsburg added. However, she wouldn't explicitly say whether it's because the male justices can't understand what it's like to be a woman, in Couric's words.

Ginsburg has long been an outspoken advocate for reproductive rights, beginning with her early days as an attorney fighting sex discrimination for the American Civil Liberties Union. But the scope of the Hobby Lobby case, combined with this new-fangled thing called the Internet, has turned the 81-year-old Ginsburg into a feminist "rockstar" — though she admits she's always been an icon for women.

But how does Ginsburg feel about her viral tumblr and her new moniker, the Notorious RBG? "It's very funny," she said. "There's a rap song."

"I will admit I had to be told by my law clerks, what's this Notorious," Ginsburg added. "And they — they explained that to me."

We also can't forget the Beyoncé Voters tumblr take on the Notorious RBG:

As Ginsburg nears the end of her career, it's only fitting that she goes out as a legal, feminist pop culture and fashion icon — showing off her various lace jabots, or collars, to Couric. But before we get wrapped up in viral memes and Hobby Lobby dissent songs, let's remember Ginsburg's fierce commitment to protecting women's reproductive rights, which have been slowing crumbling away in recent years.

I had a life partner who thought my work was as important as his. And I think that made all the difference for me, and Marty was an unusual man. In fact, he was the first boy I knew who cared that I had a brain.

We wouldn't expect anything less from the Notorious RBG.