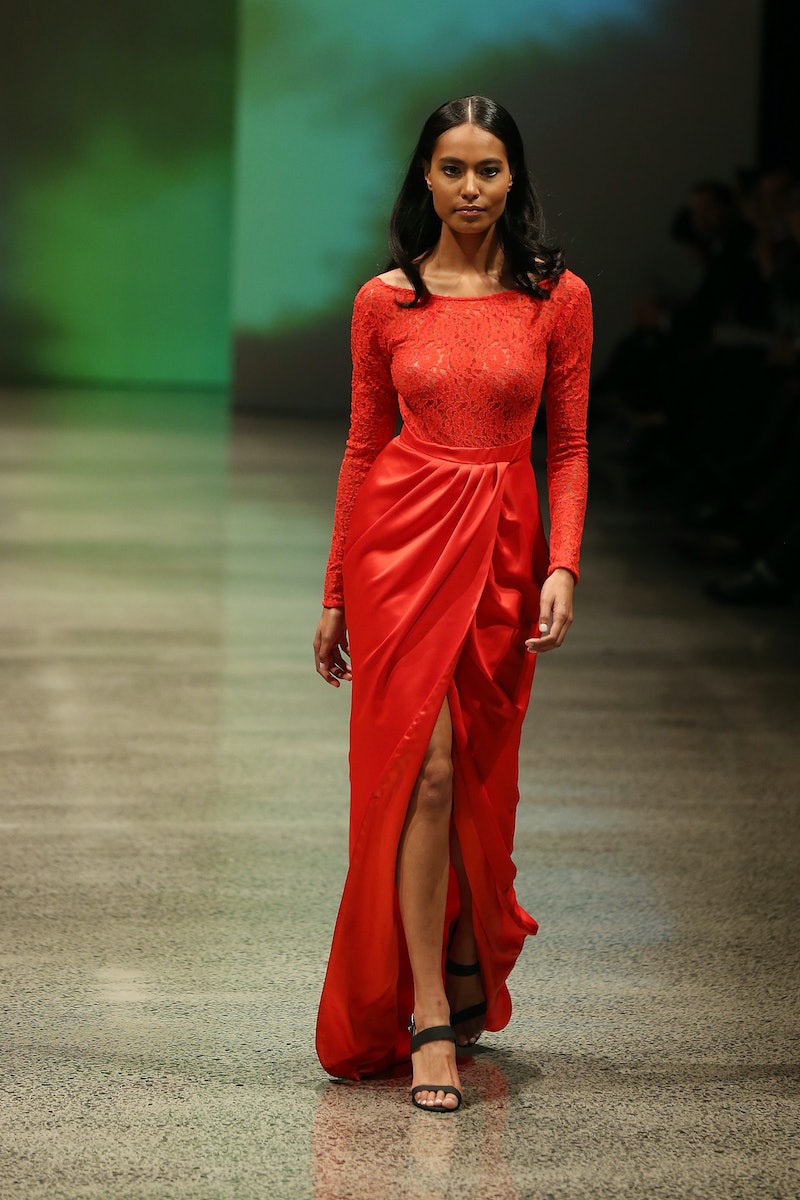 You’ve probably heard of the Red Dress Effect — it’s the reason why you’ll never forget that episode of Mad Men when Joan(nie) bends over while wearing a tight crimson number. Or that dress Satine wears for a very hot minute in Moulin Rouge. Or any number of iconic outfits worn by female characters in classic films (The Matrix, Pretty Woman, Titanic, Star Wars, etc.). In short: I think we can all agree that the image of a woman wearing a red dress is hella powerful. In fact, according to AdWeek, it's so powerful that marketers have actually been using the Red Dress Effect for years to sell products. (Shocking!)

Adweek explains that the iconic image of a woman in red has been used in advertising for ages. The reason? Psychology aside (we will return to that in a moment), it has a lot to do with cultural significance. Adweek cites brand consultant Liz Dennery Sanders, who explains that the color “has a long history," and has "always signified power, wealth and passion.” Who doesn’t want to buy something from someone who’s dripping with wealth, power, and passion? (What else do you need, really?) The article also notes that the image of an attractive woman in a red something-something has a more universal meaning: sex.

Jenny Darroch, a professor at Claremont Graduate University’s Drucker School of Management and author of Why Marketing to Women Doesn't Work, explains for AdWeek what a women in red means as far as advertising:

"Through time, there’s been a common meaning for the red dress: It’s love, lust and sex."

And what's that phrase you always hear about in advertising? Oh right, "sex sells."

This is where the psychology comes in. Why the does red always equate to sex? Or love, or lust? Why does the same color that screams “don’t walk, you’re going to be late again mwahahahaha!" to me at every other cross walk also mean “let’s do it"?! Because science, of course! HuffPo Science explains that the connection between the color red and sex has to do with biology. According to Adam Pazda, a psychologist at the University of Rochester in New York state, when female primates are fertile, they "become flushed" (so, red), which lets the male primates know it’s time to mate. Interesting...

Pazda conducted a study to test this theory on humans, HuffPo notes. In the study, researchers asked men to view two images of the same women: in one she was wearing a red shirt, and in the other, a white shirt. He asked them to rate them on a scale of one to nine as to how interested in romance (okay, sex) they appeared. The results: the women in red were rated higher and seemed more likely to "do it."

But that’s what men think. What do women think?

According to TIME, Pazda did another study honing in on what women think of their red-clad peers. The study notes that women perceived other women in red in a negative way, and that they not only seemed more sexual, but also more likely to “guard their mates.” Hm.

AdWeek notes that despite culturally significance and psychology, it’s hard to pinpoint exactly why the Red Dress Effect works as far as selling a product goes. Whether it's lust or power, there's something to be said about the fact that this image is still turning heads (and selling pretty much anything) for decades.