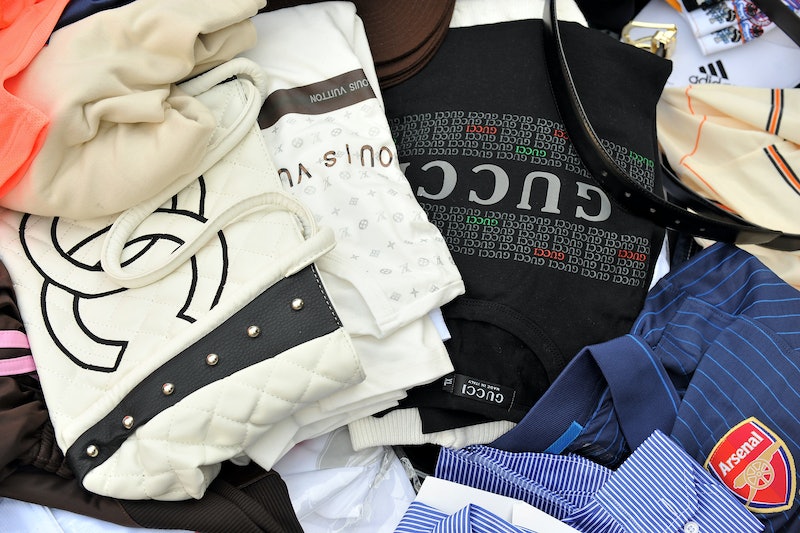 Oh, the "It" bag. There have been many since the term was coined in the 1990s, when the luxury handbag market started to boom and the bags were status symbols decorating the arms of celebs and the real girl who saved and scrimped until she had enough to purchase one to dangle proudly from the crook of her arm, wrist, or shoulder.

But even before the arm candy was christened with a cultural buzzword for a name, "It" bags already existed. The lore behind the The Birkin, for example, is infamous. The bazillion dollar bag — more like $10,000 on "average," but still, a large price tag — was born in 1981 after Hermes CEO Jean-Louis Dumas sat next to actress and style queen Jane Birkin on a flight. She spilled the contents of her straw bag all over the place, commenting on how hard it was to find a suitable, quality leather weekender bag. Dumas was then inspired to create the Birkin to solve that conundrum. That's a pretty sweet deal, if you ask me.

Also, did ya know that "It" Bags can be traced back to designer Giuliana Coen of Roberta di Camerino? In the '40s, she was created what are considered the first artisan designer bags.

This is a brief history of some of the most memorable and transcendent "It" bags, which usually become investment pieces, instead of being mere trend items that don't hold their value, in recent years. While the "It" bag status symbol has fallen prey to fakes and Canal Street counterfeits, these classic "Its" still reign supreme.

New generation "It" bags remain to be seen. The overall concept is not as popular in this decade, but here's to hoping the "It" makes a comeback. Also, there have been tons of "It" bags over the years, like Marc Jacobs' Sofia, named after Miss Coppola, which is a classic, or the Louis Vuitton x Takashi Murakami series, which saw the iconic LV monogram doused with splash of loud and, IMO, inconsistent colors and cherry blossoms in the early '00s, and felt more trendy than timeless.

These are some of the most enduring, unexpected, and personal faves.

Hermes' top-handle bag was called the Sac à dépêches when it launched in 1935, but it was renamed the "Kelly," after Grace Kelly, in 1956 since the American actress who became a princess was fond of toting the bag and using it to conceal her expanding baby bump. Yes, even a class act like G. Kelly dealt with the paps.

As mentioned previously, the bag was named after the actress. The Birkin has a lock and a key, is carried by celebs, and can cost anywhere from $7,000 to $150,000, depending on the materials used, from the skin to the hardware. It's also custom-crafted. It has no logo, but is instantly recognizable. Birkin herself has just one and it is covered in stickers and beads. How punk fucking rock of her. It's her namesake bag; she can destroy it if she wants to.

Lindsay Lohan and Nicole Richie made this slouchy, soft satchel popular. Designed by Nicolas Ghesquiere, the moto bag, with its laced handles and rectangular shape, became so freaking popular that in 2007, the brand had to file legal papers to protect it from fakes. This writer owns one in a light denimy blue shade and as it got older, it got better. I also own a black, bucket-shaped Balenciaga bag that I like even more than the moto. #SplurgeEveryOnceInAWhile.

The Kooba Sienna was named after boho chic queen and actress Sienna Miller. It was one of the 1998-launched brand's most popular and part of its anniversary celebration, too. This "It" always stands out to me since it was what put Kooba on my radar as a brand. I own several (a mix of retail and sample sale pieces) from the mid-'00s when they were the most rockin' bags on the market.

The arm satchel with its signature padlock is heavy even without any personal effects inside of it! It's a work of art, really. The Paddington sold out before it even hit a retail shelf. It truly is a work of freakin' art.

The quilted chainstrap classic flap bag with the interlocked Cs (pictured) is iconic, yes. It also has had several variants with the straps, logos, and locks. Overall, the flap bag has been around since 1929 and was created by that timeless icon of chic known as Coco Chanel. The straps were said to be inspired by soldier bags so that women could be hands-free when it came to their bags and it had a mademoiselle lock. It was updated in 1955 and called 2.55 because of its creation date. Later versions had the iconic Cs. It was reissued in 2005 for its 50th anniv as Reissue 2.55.

The satchel was a must-own at one point, named after Brit style "It" girl Alexa Chung. In fact, it was so popular it was recession-proof. She was not a part of the decision process; she just inspired it and it uses her name. Hey, that'd be good enough for me!