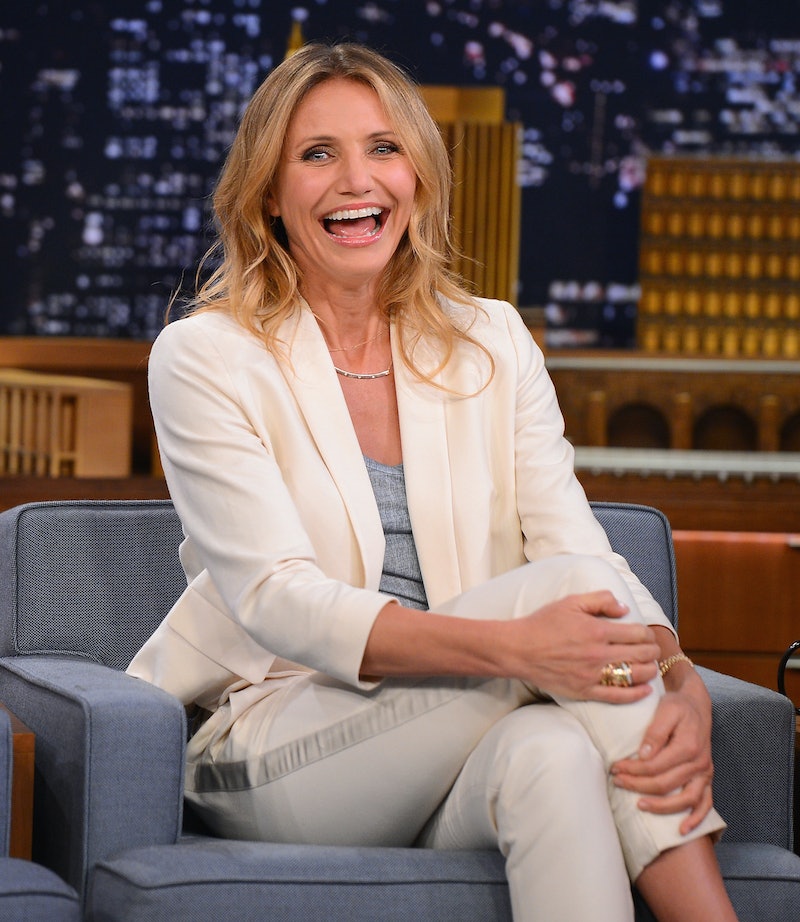 I equate Cameron Diaz to George Clooney. They’re both extremely attractive Hollywood A-listers what with Clooney’s salt and pepper hair and Diaz’s blue eyes and wide smile. They both have legs and those legs have walked red carpets. More importantly, they both have had to field questions about their perpetual singledom. Well, maybe not so much for Clooney since his engagement to lawyer Amal Alamuddin, but eyes definitely are on Diaz, especially since a recent European vacation Diaz took with boyfriend and Good Charlotte band member Benji Madden. Unlikely couple has been dating since spring after being set-up by Madden's sister-in-law Nicole Richie.

Of Diaz and Madden, a source recently told People magazine, “It’s early, but they have talked about marriage” and added, “Benji spends so much time at Cameron’s that it seems he now kind of lives there. They look very happy together… Cameron hasn’t looked this happy for years.” It's all very rumor-y right now, of course, although wedding talk was only fueled further when Madden took a trip with Diaz to meet her family in Florida.

But Diaz has been consistent in her convictions on relationships and marriage going back as far as her relationship with Matt Dillon in the '90s. It apparently led to their break-up, when Dillon realized that Diaz really meant it when she said she didn’t want to get married. In countless interviews for magazines and talk shows, Diaz has been confident in her lack of wedding band.

Here are some instances where Diaz made it clear she was absolutely fine without marriage:

For her Esquire cover interview in 2012, Diaz admitted that marriage never interested her. It was just one of those things.

During promotions for The Other Woman , Diaz told the Daily Mail she saw marriage as a form of peer pressure.

I think some people want other people to make the same choices in life that they have made so that the can feel good about their own choice.

In 2010 when Bad Teacher was soon-to-be released, Maxim asked if Diaz thought marriage was a dying institution.

I do. I think we have to make our own rules. I don’t think we should live our lives in relationships based off of old traditions that don’t suit our world any longer.”

During a 2012 Redbook interview, Diaz did admit that she once had expectations for marriage but still didn't set it as a priority.

I thought I was going to be married and have two children by the time I was 21. I think I felt I had to model my life after my mother’s. But then my career was starting to take off and there were still so many things I wanted to do. So that dream for me was shattered early on. After that I never put another time line on anything in my life.

A lot of people chase after it because they’ve been told, ‘This equals happiness.’ They chase it, they get it, and they find out, ‘Why did I think this was going to make me happy? I’m miserable!’ I don’t know if anyone is really naturally monogamous. We all have the same instincts as animals. But we live in a society where it’s been ingrained in us to do these things.

But she did say in a Parade interview that she was a romantic:

I am a romantic. I love romance. I’m not afraid of commitment. I commit to everything and I am hopelessly loyal. But I hate predicting the future, I really do, because you just don’t know. The mystique and the romance of a big wedding are lost on me. I don’t think that could ever do something that extravagant. I am not much of a planner. I would probably make the phone call 20 minutes before the bus leaves for the chapel and ask if anyone is available to come. That’s probably how my wedding is going to end up.

So who knows, really, what will end up happening for Diaz. She seems open to any possibility, and she and Madden seem fine where they are with marriage or no marriage on the table. "I am attracted to someone who knows who he is," she said on the red carpet for The Other Woman. "And I think that when a man shows interest in me, then it’s because he sees that I know who I am, too." I couldn't agree more.