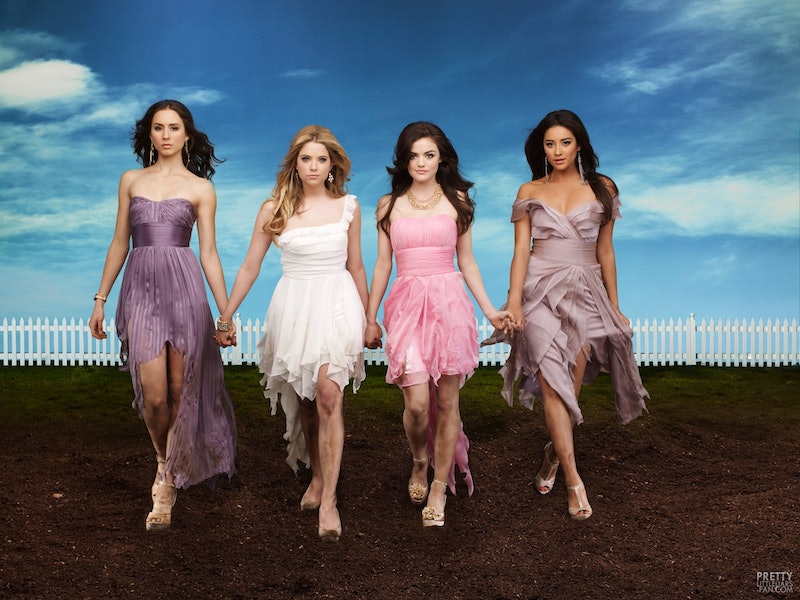 We tuned into the Season 4 premiere of Pretty Little Liars Tuesday with questions — and left the premiere with even more questions. Though we found out who was in the trunk (Darren Wilden, RIP, kinda) and who the Queen of Hearts was (also Darren, and — maybe? — Melissa), it's going to be a while before the show lets us in on some of the show's bigger secrets. Thankfully, we have an entire summer season to see how A's antics play out — and how our liars fight back.

I was bummed when the girls opened the trunk, only to find a rotting pig corpse. Seriously, Pretty Little Liars? We were left waiting and wondering for this long for a dead pig? Thankfully, the pig turned out to be a metaphor: A dead pig = a dead cop. And the dead cop was nobody's favorite Rosewood detective, Darren Wilden. We know that this season, A's master plan is to set up the liars for Wilden's murder, but who really killed him? Was it A, or just another Rosewood resident with a grudge? (My money is on CeCe Drake, because why not?)

What's the deal with Toby's mom?

Literally the most heartbreaking flashback ever, and just one more reason why Ali was basically the worst. We know that Toby's mom died before Jenna came to Rosewood, but we never knew how. In the flashback, it seems that Toby's mom was sick with something — she was staying in bed until four and had almost no memory of where she was. Ali — a friend of Toby's at the time — decided to skip over playing the sympathetic friend card and start playing the, "Wow, your mom is so lazy!" card instead. (Like I said, Ali was the worst.) It looks like Toby is still looking for answers regarding how his mom died — and that A is ready to bargain with him for them.

Who is the funeral mourner?

While I'm sure this person will get an official fan name pretty soon (like Red Coat or the Black Swan), this woman has only been identified by her enormous face veil at Darren's funeral. We learn later that the veil has been covering up a face — Ali's face. Or rather, an Ali mask. An Ali mask that has been half-burned off. So, did this mourner set the fire that nearly killed the liars? Is she the one who pulled the girls out? And, of course, the biggest question: Is she A?

Can we trust Mona?

I hope the answer to this question is yes, but knowing Mona's history makes it hard not to question her. Mona made it her mission to bring down the liars up until, like, five minutes ago. Bringing them breakfast doesn't exactly change that. (Favorite Mona-ism of the premiere? Mona borrowing Em's car without taking the keys: "Yeah, I have my own set.")

Is Melissa really the other Queen of Hearts?

Mona had a video proving that Wilden was one of the Queens of Hearts. Mona claimed that the other Queen of Hearts was Melissa — but as soon as the video would prove that, Mona's computer started going haywire. Is Melissa really out to get the girls?

We were pretty convinced in the finale that Ali was alive — both Hanna and Mona saw her pull them out of the fire. But then there's that whole thing with the creepy Ali mask. It really DOES look like Ali. Did Mona and Hanna confuse the real thing with a masked version?