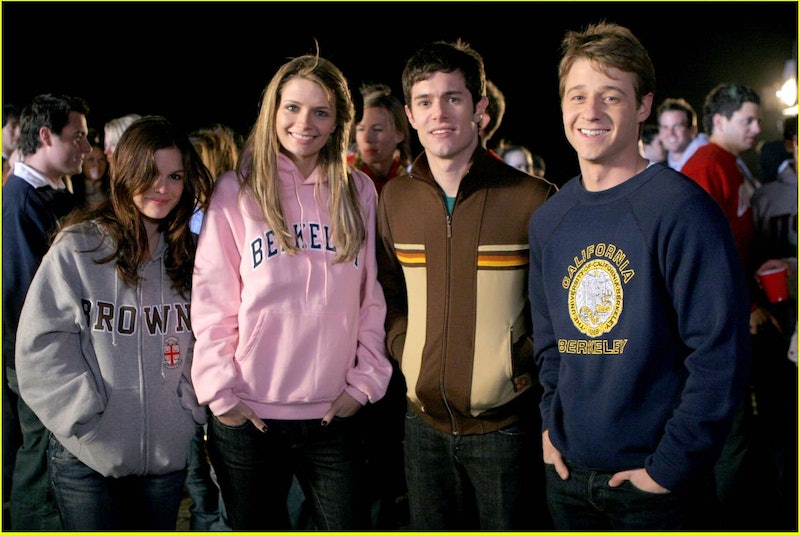 Here's the things about teen TV shows: they have nothing to do with reality. Sure, they might pretend to be "real," having characters get driver's licenses and attend high school proms, but having no parents around, ever? Barely attending class? Spending the weekend going to bars and trashing hotel rooms? That's not high school, at least in my experience. Still, it's usually pretty easy to cast those issues aside, because it's much more interesting to watch partying and drama than babysitting and SAT tests. There is one teenage experience on these shows, though, that just bothers me too much to ignore, no matter how many times it comes up: the college application.

Because despite how "real" they might think they're being, hardly any TV show ever gets any aspect of applying to college right: not the dates, not the essays, not the amount of colleges a kid should be applying to (hint: it's more than one). For some people, these errors might be as easy to ignore as the partying or the freedom, but for me, it's impossible; maybe my college decision process was more stressful than most, but I just can't let go of the fact that THAT IS NOT HOW APPLYING TO COLLEGE WORKS.

So, if you're a teenager watching re-runs of The O.C. or Friday Night Lights, I hate to inform you that all your TV-based expectations for what the college application process is like are totally off. For example:

"FACT:" You Only Apply to One School

Truth: You apply to five, or six, or even nine or ten schools. The fact is, it's never just one — what would happen if you didn't get in, and you had no other choices? Apparently, just not go to college, because that's what happens on a ton of shows where a character gets rejected from their dream school and is "forced" to stay home/get a job/forgo college forever because no other option exists. Ever heard of a safety school, Seth Cohen?

"FACT:" If a Scholarship Falls Through, You're Doomed

Truth: No question, scholarships are great, and it sucks when they fall through. But bursting into hysterics and freaking out over how you can't go to college now is a bit of an overreaction, don't you think, Lyla Garrity? Even if you or your parents don't have the money to pay your way through college, there is a little thing called the student loan that many — in fact, most — people use instead. Is it ideal? No. Is it realistic? Unfortunately, yes.

"FACT:" You Apply in May. Or June. Or Whenever You Feel Like It.

Truth: With few exceptions, most colleges require applications to be submitted by January, at the latest, because acceptances/rejections come back around March, and final decisions have to be made by May. Yet in the TV world, deadlines do not seem to exist. Instead, prospective students apply to schools whenever the hell they feel like it, whether that be March, May, or sometime after graduation when a concerned parent wonders, "hey, did you figure out that whole college thing yet?" Look, I don't expect characters to do early decision; I understand that a lot of shows make a whole storyline out of waiting for one's acceptance letter. I just wish it was a little more realistic, that's all.

"FACT:" The College Essay is A) One Essay and B) Anything You Want

Truth: One of the most unwelcome surprises of my college application process was discovering writing "the essay" actually meant writing five or six of them; as it turns out, even though most schools want a common essay, they also require a couple smaller ones as supplements. Yet while I slaved over my handful of essays for hours on end, TV characters seemed to write just one — and even more, it could be on anything they wanted. Those "person you admire/page of your autobiography/most challenging moment" prompts we all had to suffer through? Gone, replaced with essays about everything from growing up in Texas to why college just seems really fun, you know?

"FACT:" Once You Get In, You're Gone For Good

Truth: In my first year of college, I came home four times: Thanksgiving (five days), winter break (five weeks), spring break (nine days) and a long weekend (three days) — and that's not even counting the months I spent in my hometown over the summer. In reality, there is no such thing as leaving "for good," at least when you're a freshman in college. Unless money or distance prevents it, chances are, you'll be back home at least a few times that first year, so it's ridiculous that on TV, characters act like the moment a kid leaves for school, he/she is never going to return home again. Bedrooms are repainted, one-way plane tickets are booked, and families say goodbye like it's forever, but it's not! It's just college! And don't get me started on what happens after the kids leave; massive dorm rooms? An hour of class? A roommate who looks like a 40-year-old? It pains me to watch that "reality" unfold, but I guess that's what I get for watching so many hours of teenage TV.