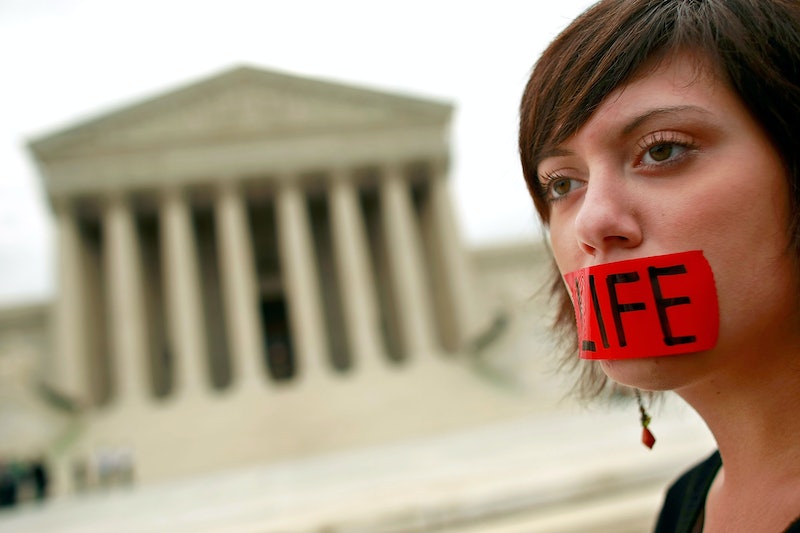 Pro-choice, pro-life — do these words matter in 2014? Once Planned Parenthood shed its "pro-choice" label last year, opting for the more encompassing "pro-women's health," it opened up room for debate. That debate continues as more women's rights organizations distance themselves from the pro-choice label — just in time for the 2014 midterm elections.

Some health care and political leaders blame it on a generational shift — young women, they say, don't identify with labels. Others, including Planned Parenthood Action Executive President Dawn Laguens, believe present-day issues cannot be summed up in a single, compact term. “You just have to take more words,” Laguens recently told The New York Times.

At a time when pro-lifers are succeeding on so many levels, [pro-choice] is too closely associated with support for abortion.

It's hard to deny that abortion rights have been losing ground in many U.S. states, but it's also far too defeatist to say anti-abortion supporters have won. With so many politicians, advocacy groups, grassroots organizers and ordinary women putting up a fight from Capitol Hill to the Rio Grande Valley in Texas, the anti-abortion side should probably think twice before declaring victory.

Prior to Roe v. Wade, most abortion rights supporters called themselves "pro-abortion." Though the term sounds harsh in the present day, it made sense then: The political goal was to legalize abortion. After all, NARAL Pro-Choice America's original name was ARAL—the Association to Repeal Abortion Laws.

The term "pro-choice" soon originated following the decision of Roe v. Wade in 1973, with Planned Parenthood — now providing abortions — adopting it as the organization's message. Unlike the former pro-abortion, which fell out of fashion, pro-choice was less blunt and seemingly more accepting. It reaffirmed that women should have a choice, but the choice shouldn't always be abortion — which is often the misconception with the term pro-abortion.

The Evolution Of Choice

The loss of "pro-choice" is not necessarily a new development. Over the years, the protest-slogan signs have morphed, taking on more descriptive and emotional terms. One of the most popular reproductive rights slogans now was taken from the late abortion doctor Dr. George Tiller: "Trust Women." It frames the abortion issue in a new light, putting women and their lives in the forefront.

Still, there's been a move away from the abstract or symbolic, which may have been triggered by the new wave of anti-abortion restrictions in recent years. Abortion rights supporters now are honing in on more tangible goals. As a result, it makes these issues more urgent to American women.

"We’re really trying to focus on, what are the real things you’re going to lose?" Cecile Richards, president of Planned Parenthood Federation of America, told The New York Times. "Sometimes that’s rights. Sometimes that’s economic or access to health care for you or for your kids."

Writing in an op-ed for The Huffington Post, Laguens added that the "choice" has changed over the last four decades. In the 1970s, women were fighting for that choice to have an abortion; now, women are fighting for access:

Today "choice" does not exist for women in more than 30 states because they live in states in which legislatures have passed laws restricting access to abortion.

The Misconceptions Of Pro-Life

The term "pro-life" is not without controversy, either. Following the outcome of Roe v. Wade in 1973, abortion foes — many of whom were members of the Catholic Church — grabbed the pro-life label for themselves. It was a smart move. Semantically, it established that anti-abortion supporters were moral and righteous, for the opposite of pro-life must be "pro-death." Politically, it gave them something to fight for, instead of against: They are not fighting against women, but for the unborn children.

However, the tactics, motives and campaigns behind the pro-life movement have led many people, ranging from politicians to Catholic nuns, to question whether "pro-life" was representative of the cause. For instance, how can a movement be pro-life, but also be responsible for the assassination of doctors? Or, in a less dramatic example, urge its members to vote against health care reform and initiatives for single mothers and poor children?

Obama's Affordable Care Act does not pay for abortions. In Massachusetts, Romney's health care law does. Obama favors, and included in the Affordable Care Act, $250 million of support for vulnerable pregnant women and alternatives to abortion. This support will make abortions much less likely, since most abortions are economic. Romney, on the other hand, has endorsed Wisconsin Republican Paul Ryan's budget, which will cut hundreds of millions of dollars out of the federal plans that support poor women. The undoubted effect: The number of abortions in the United States will increase. On these facts, Obama is much more pro-life than Romney.

Sister Theresa Kane explained the hypocrisy of the label best in an interview with Makers in 2012. Sister Kane, who grew up before Roe v. Wade and knew women in her neighborhood who had back-alley abortions, said:

I look at that experience and say, 'That's not the way I want life to be for a young girl or woman.' So therefore, I think having [abortion] legal makes it safer. ... It's not often a choice. It's the absence of choice for many young women that brought about the decision to have an abortion.

It would be the understatement of the year to say that abortion remains a polarized issue. A May 2014 Gallup Poll found that Americans are still nearly split on this issue, with 47 percent identifying as "pro-choice" and 46 percent as "pro-life." What's interesting to note, though, is that 50 percent of people between the ages of 18 and 34 call themselves "pro-choice" — the highest out of any age gap. So, is there still a generational group, or are more young people just starting to pay attention?

Although some feminist writers lamented the loss of "pro-choice" because it placed less emphasis on abortion, it's also a smart strategy to emphasize "pro-women's health." Following June's Hobby Lobby ruling, it would also be the understatement of the year to say women are pissed. Not all women may have an abortion, but they'll need access to other types of reproductive health care.

Planned Parenthood is working to broaden the conversation beyond the "pro-choice" label — so that our terminology reflects our aspirations and women's full experience.

More like this
How 5 People Upended Their Lives To Fight For Abortion Rights
By Hannah Smothers
Why You're Seeing Green Bandanas At Abortion Rights Protests
By Lexi Inks
How To Fight For Reproductive Rights, Based On How Much Time You Have
By Courtney Young
The UK Abortion Laws In 2022, Explained
By Sophie McEvoy
Get Even More From Bustle — Sign Up For The Newsletter