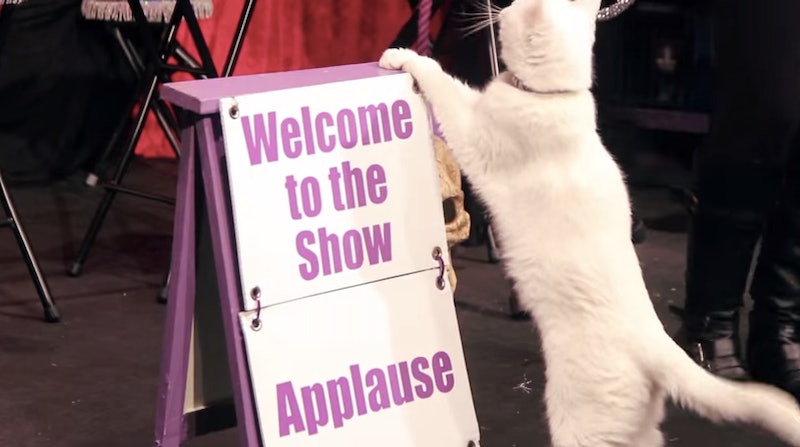 The American dream, that illustrious ideal that promises reward for anyone willing to work hard enough, is now achievable by cats as well as humans. At least, that's what the cats of the traveling cat circus must believe, as they are rewarded for their hard work and cat-crobatics after one of their popular shows.

Sound too weird, or good, to be true? I wouldn't lie to you. Samantha Martin, a zookeeper turned cat circus ringleader, has made a project out of the cat circus for the past 10 and a half years, and she is attracting some well-deserved attention. Known as "The Amazing Acro Cats," Martin's band of kitties prove that cats are good for more than just sleeping and chasing string, and are, in fact, incredibly trainable animals.

The Amazing Acro Cats, like all great success stories, had humble beginnings. When Martin first began training her cats, she had nothing more than "a couple of ladders and a big rope." But when her cats started learning the tricks of the trade — everything from performing high jumps to long jumps to walking on a ball down a tight rope, people started noticing.

Her initial goal was simply to dispel the notion that cats could not be taught tricks and commands — after all, how many times have you gotten your cat to sit on command? But apparently, with a little bit of a patience and a lot of proper technique, our feline friends are just as eager as come, stay, and shake hands as any dog.

The trick, Martin says on her website, is to use "clicker training," a method that she employs regularly and encourages others to try as well. Clicker training, her website says, can both "improve your cat's life, and also be useful in the event of an emergency situation."

And while her shows don't ever display any emergency situations, they certainly do showcase the benefits of clicker training, considering how well behaved and decidedly clever her cats appear to be.

In addition to skateboarding, rolling barrels, pushing shopping carts, jumping through hoops, and various other displays of acrobatic prowess, some of the cats have also formed their own band called the Rock Cats. With one cat on guitar, one on drums, and one on the keyboard, this little band might just produce the next greatest hit.

As delightful as the kitty antics are, the cats aren't simply performing for the sake of performing. Rather, Martin began the cat circus with a purpose — to raise awareness for animal welfare and to find homes for many of the "rescues, strays, and misfits" Martin has taken under her wing.

In the last five years, Martin has managed to place 142 cats and kittens in new, loving homes, and this number only continues to grow as her traveling circus draws oohs, ahhs, and "Yes, we'll take that one" from adoring audiences.

Martin herself is the proud mama of quite a few of these cats — 13 and a half, to be exact (she counts the kitten as a half). And every new cat she finds, she makes an attempt to adopt. Speaking with 9News of Colorado, Martin said, "I can't adopt every cat out there, but I have enough space in my life, my heart, and my bus to take a few here and there."

The bus she refers to is the mobile home of the cat circus, which probably rivals Disney World as the happiest place on earth. After all, it is filled with "domestic 'ol house cats doing amazing things." Amazing things like hoisting flags and reading signs, that is. And it's not just cats that get to be part of the fun — Martin's show also features a drum playing chicken named Cluck Norris, a groundhog, and even a few rats (who magically, don't get eaten by their cat colleagues).

Martin's background as an expert animal trainer certainly makes the process to turning regular kitties into super cats a bit easier, and her talents as an animal handler have been utilized by Walmart and PetCo for commercials, as well as by MTV and Animal Planet for various programs and documentaries.

But despite all the fame and media attention, Martin's mission remains simple — helping people better understand their animals. And if watching some cats perform in a cat circus is the first step, count me in.

More like this
Joe Lycett Just Took HIs David Beckham Qatar Protest To A Whole New Level
By Sophie McEvoy
Looks Like Jack Grealish Found The Sandy To His Danny
By Sophie McEvoy
Footballer Jake Daniels Shared His Thoughts On A World Cup Boycott
By Sam Ramsden
If You Have Pets, You Probably Don't Realize You're Making These Common Mistakes
By Mackenzie Edwards
Get Even More From Bustle — Sign Up For The Newsletter