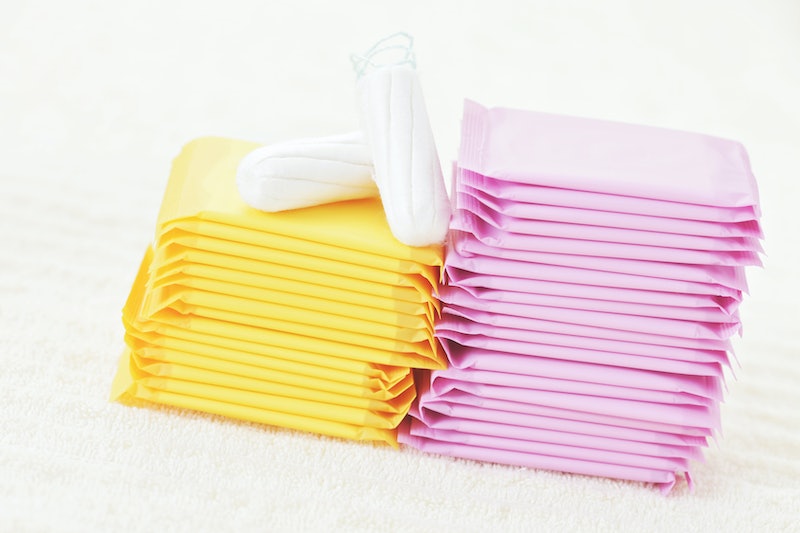 I've been tampon-free my whole life, and it's likely that tampon-free I shall remain. When I first got my period, I used maxi pads instead of tampons and I have worn them every single period since. That's a lot of menstruation. I never made the switch to tampons and I'm not particularly interested in those reusable and newly in-vogue Diva Cups. Actually, I'd sooner go the Tampax route, which is obviously one I have yet to travel.

I'm not anti-tampon. Really, I'm not. I know it sounds incredibly old-fashioned, but I'm merely a loyalist and a creature of habit who doesn't feel the need to veer off course in this particular case. I'm pretty professionally and personally adventurous —I've gone on tour with rock bands, riding in the buses, flew to Norway by myself in February 2007 to interview a band, and rode 100 roller coasters in a single summer.

But this is feminine hygiene products we're talking about, not a major job change, deciding to sell all my possessions and hitchhike across the country, or thinking about going under a plastic surgeon's knife for some nippage and tuckage. It's just a habitual, routine thing.

Here are the five key reasons that I use/used pads and don't use tampons.

I have always — natch! — used Always, thanks to their special "dri-weave" fabric. The brand doesn't tout that in its marketing these days, but it doesn't matter since I've been pledging my allegiance to Always for so long. No generic store brands; I can't get down with the regular cotton ones that don't pull the moisture away from the body the way my treasured Always pads do.

2. My Dad Was Paranoid About Me Getting TSS

Being the only daughter in a household of boys is the biggest reason I started and stayed with pads. My dad had read that tampons caused Toxic Shock Syndrome (TSS), a medical situation where a bacterial infection becomes fatal. The condition was sometimes caused by tampon usage, and TSS warnings were posted on tampon boxes, so he told my mom he didn't want me to use them and she carried out his orders. They were buying the hygiene products, I was living in their house, and I wasn’t paying for 'em.

Apparently, TSS was associated with super absorbent tampons, according to a Mayo Clinic report on the subject. Certain tampons were yanked from retail shelves and stats linking the two went down. Tampon makers eventually ceased employing the materials and design that were associated with TSS, although conventional wisdom suggests that women should use low absorbency brands and change their tampons regularly, as well as alternating their usage of 'pons and pads.

My mom used tampons, yet she never offered me the option to use them even as I got older and the TSS fear faded from view, so I further developed a loyalty to pads. Even when my flow was at its heaviest and when I was able to make the decision for myself, I still rocked pads. I went to Catholic school and many of my friends used pads so it was never like I was the feminine hygiene protection outcast or The Great Tampon Denier. It never felt "wrong" to not use tampons at that time. I wasn't squeamish about inserting the tampon or anything like that either. I wasn’t afraid of my own body. I simply had no desire to "try OB and you'll see."

When I took over for purchasing my own supplies, I was drawn to the pretty pink applicators and variety of scents that tampons offered, but I still plunked down my five bucks for my precious Always. Why? Because they had never failed me, despite the winged versions feeling like a mini-diaper at times. The Always pads had earned my trust. We grew up together and they were always there when I needed them, so I felt that I should stick with what worked. Ain't broke, don't fix. While in high school, which was also a Catholic learning institution, some of my new friends were shocked, like "OMG! You don't use tampons?," offering up the standard issue "RUFKM?" reaction. They were like, "But you HAVE to." That was all the more reason for me NOT to.

I am not, and wasn't, a gymnast or a runner like some of my friends. They used tampons because their extracurricular activities dictated it. Pads suited me fine, since I didn't have an athletic pursuit that required me to board that tampon train.

So, my "aversion" to tampons in favor of pads is really due to the fact that I am a creature of habit when it comes to basic routines. What works...works.

I've never abandoned pads for tampons since I stick with what works. But I will close by saying this. I usually try everything new or different once or twice, from scotch to eyebrow threading. So, I'll let you know if I try a tampon once in my life just to say that I did.